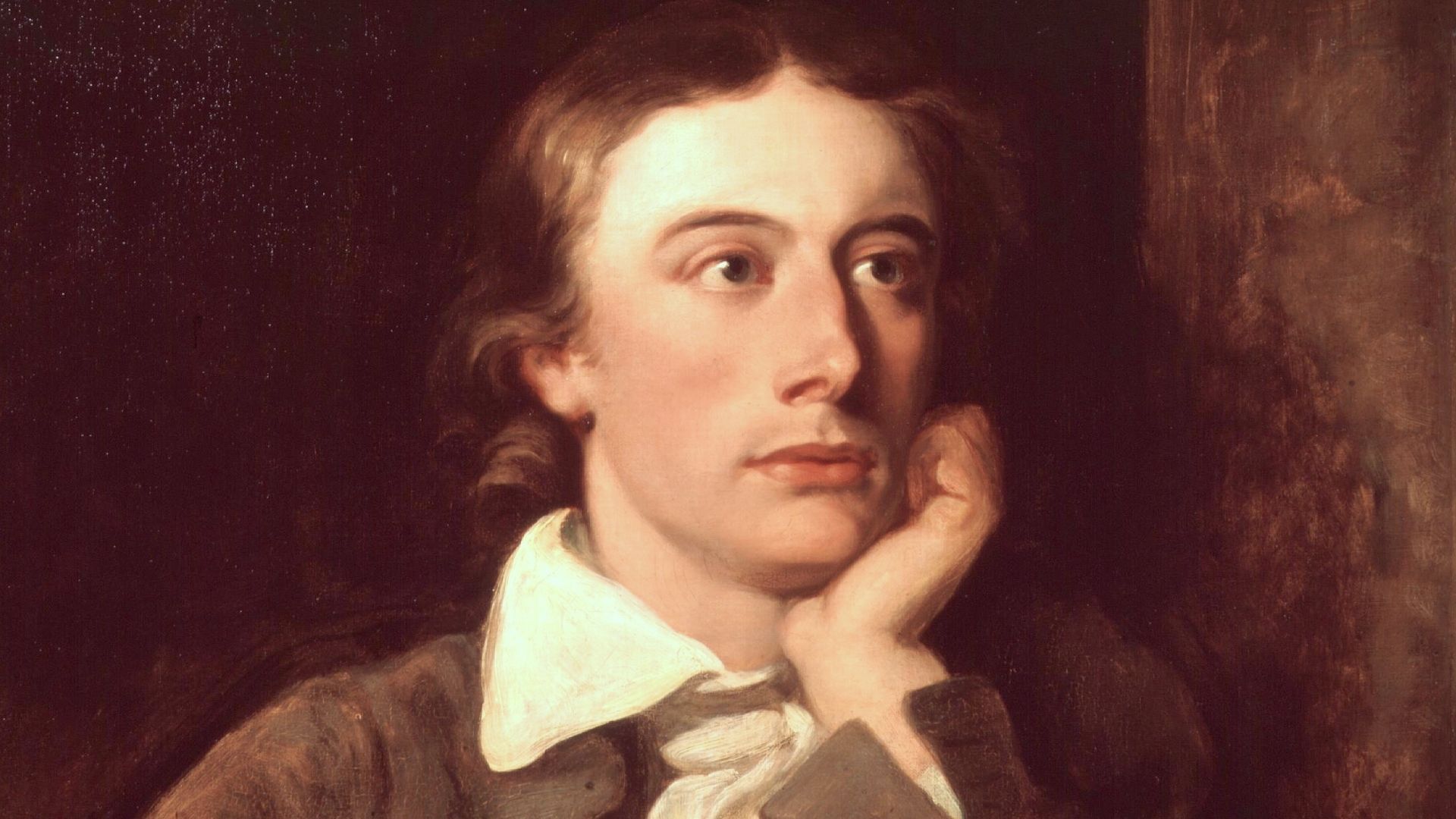 
A FRAGMENT OF A TRAGEDY
ACT I.
SCENE I. Field of Battle.
Alarum. Enter King STEPHEN, Knights, and Soldiers.
Stephen. If shame can on a soldier's vein-swoll’n front
Spread deeper crimson than the battle's toil,
Blush in your casing helmets! for see, see!
Yonder my chivalry, my pride of war,
Wrench'd with an iron hand from firm array,
Are routed loose about the plashy meads,
Of honour forfeit. O that my known voice
Could reach your dastard ears, and fright you more!
Fly, cowards, fly! Glocester is at your backs!
Throw your slack bridles o'er the flurried manes,
Ply well the rowel with faint trembling heels,
Scampering to death at last!
First Knight. The enemy
Bears his flaunt standard close upon their rear.
Second Knight. Sure of a bloody prey, seeing the fens
Will swamp them girth-deep.
Stephen. Over head and ears,
No matter! 'Tis a gallant enemy;
How like a comet he goes streaming on.
But we must plague him in the flank, hey, friends?
We are well breathed, follow!
Enter Earl BALDWIN and Soldiers, as defeated.
Stephen. De Redvers!
What is the monstrous bugbear that can fright
Baldwin?
Baldwin. No scare-crow, but the fortunate star
Of boisterous Chester, whose fell truncheon now
Points level to the goal of victory.
This way he comes, and if you would maintain
Your person unaffronted by vile odds,

Take horse, my Lord.
Stephen. And which way spur for life?
Now I thank Heaven I am in the toils,
That soldiers may bear witness how my arm
Can burst the meshes. Not the eagle more
Loves to beat up against a tyrannous blast,
Than I to meet the torrent of my foes.
This is a brag, be 't so, but if I fall,
Carve it upon my 'scutcheon'd sepulchre.
On, fellow soldiers! Earl of Redvers, back!
Not twenty Earls of Chester shall brow-beat
The diadem. [Exeunt. Alarum.

SCENE II. Another part of the Field.
Trumpets sounding a Victory. Enter GLOCESTER. Knights, and Forces.
Glocester. Now may we lift our bruised vizors up,
And take the flattering freshness of the air,
While the wide din of battle dies away
Into times past, yet to be echoed sure
In the silent pages of our chroniclers.
First Knight. Will Stephen's death be marked there, my good
Lord,
Or that we gave him lodging in yon towers?
Glocester. Fain would I know the great usurper's fate.
Enter two Captains severally.
First Captain. My Lord!
Second Captain. Most noble Earl!
First Captain. The King
Second Captain. The Empress greets
Glocester. What of the King?
First Captain. He sole and lone maintains
A hopeless bustle mid our swarming arms,
And with a nimble savageness attacks,
Escapes, makes fiercer onset, then anew
Eludes death, giving death to most that dare
Trespass within the circuit of his sword!
He must by this have fallen. Baldwin is taken;
And for the Duke of Bretagne, like a stag
He flies, for the Welsh beagles to hunt down.
God save the Empress!
Glocester. Now our dreaded Queen:
What message from her Highness?
Second Captain. Royal Maud
From the throng'd towers of Lincoln hath look'd down,
Like Pallas from the walls of Ilion,
And seen her enemies havock'd at her feet.
She greets most noble Glocester from her heart,
Intreating him, his captains, and brave knights,
To grace a banquet. The high city gates
Are envious which shall see your triumph pass;
The streets are full of music.
Enter Second Knight.
Glocester. Whence come you?
Second Knight. From Stephen, my good Prince, Stephen!
Stephen!
Glocester. Why do you make such echoing of his name?
Second Knight. Because I think, my lord, he is no man,
But a fierce demon, Anointed safe from wounds,
And misbaptized with a Christian name.
Glocester. A mighty soldier! Does he still hold out?
Second Knight. He shames our victory. His valour still
Keeps elbow-room amid our eager swords,
And holds our bladed falchions all aloof
His gleaming battle-axe being slaughter-sick,
Smote on the morion of a Flemish knight,
Broke short in his hand; upon the which he flung
The heft away with such a vengeful force,

It paunch'd the Earl of Chester's horse, who then
Spleen-hearted came in full career at him.
Glocester. Did no one take him at a vantage then?
Second Knight. Three then with tiger leap upon him flew,
Whom, with his sword swift-drawn and nimbly held,
He stung away again, and stood to breathe,
Smiling. Anon upon him rush'd once more
A throng of foes, and in this renew'd strife,
My sword met his and snapp'd off at the hilts.
Glocester. Come, lead me to this Mars and let us move
In silence, not insulting his sad doom
With clamorous trumpets. To the Empress bear
My salutation as befits the time.
[Exeunt GLOCESTER and Forces.

SCENE III. The Field of Battle. Enter STEPHEN unarmed.
Stephen. Another sword! And what if I could seize
One from Bellona's gleaming armoury,
Or choose the fairest of her sheaved spears!
Where are my enemies? Here, close at hand,
Here come the testy brood. O for a sword!
I'm faint a biting sword! A noble sword!
A hedge-stake or a ponderous stone to hurl
With brawny vengeance, like the labourer Cain.
Come on! Farewell my kingdom, and all hail
Thou superb, plum'd, and helmeted renown,
All hail I would not truck this brilliant day
To rule in Pylos with a Nestor's beard
Come on!
Enter DE KAIMS and Knights, &c.
De Kaims. Is 't madness, or a hunger after death,
That makes thee thus unarm'd throw taunts at us?
Yield, Stephen, or my sword's point dip in
'he gloomy current of a traitor's heart.
Stephen. Do it, De Kaims, I will not budge an inch.
De Kaims. Yes, of thy madness thou shalt take the meed.
Stephen. Darest thou?
De Kaims. How dare, against a man disarmed?
Stephen. What weapons has the lion but himself?
Come not near me, De Kaims, for by the price
Of all the glory I have won this day,
Being a king, I will not yield alive
To any but the second man of the realm,
Robert of Glocester.
De Kaims. Thou shalt vail to me.
Stephen. Shall I, when I have sworn against it, sir?
Thou think'st it brave to take a breathing king,
That, on a court-day bow'd to haughty Maud,
The awed presence-chamber may be bold
To whisper, there's the man who took alive
Stephen me prisoner. Certes, De Kaims,
The ambition is a noble one.
De Kaims. 'Tis true,
And, Stephen, I must compass it.
Stephen. No, no,
Do not tempt me to throttle you on the gorge,
Or with my gauntlet crush your hollow breast,
Just when your knighthood is grown ripe and full
For lordship.
A Soldier. Is an honest yeoman's spear
Of no use at a need? Take that.
Stephen. Ah, dastard!
De Kaims. What, you are vulnerable! my prisoner I
Stephen. No, not yet. I disclaim it, and demand
Death as a sovereign right unto a king
Who 'sdains to yield to any but his peer,
If not in title, yet in noble deeds,
The Earl of Glocester. Stab to the hilts, De Kaims,
For I will never by mean hands be led
From this so famous field. Do ye hear! Be quick!
[Trumpets. Enter the Earl of CHESTER and Knights.

SCENE IV. A Presence Chamber. Queen MAUD in a Chair of State, the
Earls of GLOCESTER and CHESTER, Lords, Attendants.
Maud. Glocester, no more: I will behold that Boulogne:
Set him before me. Not for the poor sake
Of regal pomp and a vain-glorious hour,
As thou with wary speech, yet near enough,
Hast hinted.
Glocester. Faithful counsel have I given ;
If wary, for your Highness' benefit.
Maud. The Heavens forbid that I should not think so,
For by thy valour have I won this realm,
Which by thy wisdom I will ever keep.
To sage advisers let me ever bend
'A meek attentive ear, so that they treat
Of the wide kingdom's rule and government,
Not trenching on our actions personal.
Advis'd, not school'd, I would be; and henceforth
Spoken to in clear, plain, and open terms,
Not side-ways sermon'd at.
Glocester. Then, in plain terms,
Once more for the fallen king
Maud. Your pardon, Brother,
I would no more of that; for, as I said,
‘Tis not for worldly pomp I wish to see
The rebel, but as dooming judge to give
A sentence something worthy of his guilt.
Glocester. If 't must be so, I'll bring him to your presence.
[Exit GLOCESTER,
Maud. A meaner summoner might do as well
My Lord of Chester, is 't true what I hear
Of Stephen of Boulogne, our prisoner,
That he, as a fit penance for his crimes,
Eats wholesome, sweet, and palatable food
Off Glocester's golden dishes drinks pure wine,
Lodgest soft?
Chester. More than that, my gracious Queen,
Has anger'd me. The noble Earl, methinks,
Full soldier as he is, and without peer
In counsel, dreams too much among his books.
It may read well, but sure 'tis out of date
To play the Alexander with Darius.
Maud. Truth! I think so. By Heavens it shall not last!
Chester. It would amaze your Highness now to mark
How Glocester overstrains his courtesy
To that crime-loving rebel, that Boulogne
Maud. That ingrate!
Chester. For whose vast ingratitude
To our late sovereign lord, your noble sire,
The generous Earl condoles in his mishaps,
And with a sort of lackeying friendliness,
Talks off the mighty frowning from his brow,
Woos him to hold a duet in a smile,
Or, if it please him, play an hour at chess
Maud. A perjured slave!
Chester. And for his perjury,
Glocester has fit rewards nay, I believe,
He sets his bustling household's wits at work
For flatteries to ease this Stephen's hours,
And make a heaven of his purgatory ;

Adorning bondage with the pleasant gloss
Of feasts and music, and all idle shows
Of indoor pageantry; while syren whispers,
Predestined for his ear, 'scape as half-check'd
From lips the courtliest and the rubiest
Of all the realm, admiring of his deeds.
Maud. A frost upon his summer!
Chester. A queen's nod
Can make his June December. Here he comes

It's fairly obvious from this brief fragment why Keats quickly gave up thoughts of being a dramatic writer. At this point there needs to be a heated argument between Stephen and Maud (Matilda) but he can't think of anything.....Keats' great skill as a writer was in description and philosophy, not good in the theater.