In early eighteen-forty-four,
In Cornwall's heart; on Bodmin Moor,
Charlotte Dymond, a young farm maid,
Had her throat slit with a steel blade,
She crossed fast streams and deadly bogs,
Found her way through mists and fogs,
But couldn't stop that fatal blow,
That stole her life and laid her low,
She walked to meet someone that day,
Just who that was... no one would say,
Found days later beside a track,
Laid on a cart; her shroud a sack,
The surgeon, Thomas Good, was fetched,
Had in his mind, her white face etched,
Charlotte untouched by fox or crow,
Had she been moved... he did not know,
No evidence was ever found,
But her young boyfriend had gone to ground,
Fingers so quick to point his way,
Matthew Weeks panicked; ran away,
The hapless cripple, was soon caught,
No other culprit was ever sought,
The judge was just a rubber-stamp,
Bodmin Gaol was dark and damp,
The scaffold built, the crowds arrived,
Matthew swore he had not lied,
The floor gave way, the rope drew tight,
Was justice done... the verdict right?


Permissions:
I am happy for any individual, library or educational establishments to use this poem, as long as I am credited as its author and it is not used in any commercial way. This same permission goes for all of my poetry. 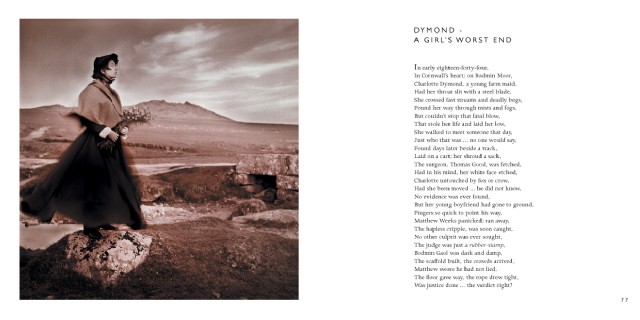 Topic(s) of this poem: history, love and life, murder, true

I played the part of Thomas Good the surgeon in a video reconstruction of this true-life murder story. This inspired me to research the story further and write a poem about it. A framed early version of this poem now hangs where a murder trial reconstruction is played out several times a day.

This poem and image comes from my ‘Phoetry Book':
‘View Points and Points of View'.

The photograph is by Chris Robbins.
The audio is of me reading the poem, recorded by Steve Nunn of Cornmill Studios.

Permissions:
I am happy for any individual, library or educational establishments to use this poem, as long as I am credited as its author and it is not used in any commercial way. This same permission goes for all of my poetry.
There is no comment submitted by members..
User Rating:
5/ 5( 1 votes )0
If You Forget Me