Our Boys Made It. (OUR KIDS SUCCESSFULLY) TURKEY STATION CHIEF PAUL HANZE..

Those with eyes like dead fish
The child innocence of the 16-year-old,
They couldn't take it from him with torture and the narrow tree. 'I'M NOT FEAR OF DEATH'
He will live with his last glance

Everyone is on vacation on a Saturday
The executioners are not on vacation. Ankara Central Prison coffee table on the table,
The rope hangs on the table.
You said 'Goodbye' with a smile
In the morning when everyone is sleeping, Ankara is cold
Prison is colder. Erdal eren's
Hold your hand before the heat of life is gone, judge
It cannot be ruled by order.

A cold Saturday in Ankara

Capital and international capital
What have our children achieved,
OURS BOYS MADE IT
tanks out,
Mamak, Metris and Diyarbakir dungeons
Tanks out, books in


let me be more clear
The money in your wallet, the bread on your table, the right to live humanely.
Taking the public's consent with a stick
January 24,1980 people's straitjacket
This is economic policy.
Neo-liberal years. What our boys have accomplished, our boys made it

OUR BOYS MADE IT..
Casino capitalism, fictitious export
Khaki Pasha Evrene TAF Honor and Gold Medal, USA Merit Medal
16-year-old narrow tree to Erdal Eren
Coupon exchange offers you bullets and
ring narrow trees
with our children of others,
This is the meeting of the people's child, Erdal Eren.


What have our children achieved,
our boys made it. retired and painter
He managed to die at the age of 97.
Erdal Eren is 16 years old,
both to live
and showed death to the fascism of September 12

The hands of the old man that gives life to the painting
Exiles, executions, torture
He signed it without any trembling.
Let's not hang it, shall we?


Pinochet and the Universe
If you at least donate your bodies as cadavers, at least your crimes against humanity would be alleviated.
You think, it won't fix the date spoof error. The universe is always 97 years old
Erdal Eren is always 16 years old
No mercy was asked from the child executioners of Giresun.

The ghost of 78 generation seeks his heir
If you put a gallows in the wind, there will be a storm.
Hands holding fire burn
If you put mountains in the water, it will overcome the obstacles.
Air loves free lungs.


Listen to your Neyzen Tevfik master, ,
'Actually, bread was enough for everyone'
This order will create slaves and oppressors
Crow in the field, mouse in the barn,
thief in the oven
Harami reign. lice and lice
The oppressed and exploited
Erdal Erenler is always 16 years old.., , 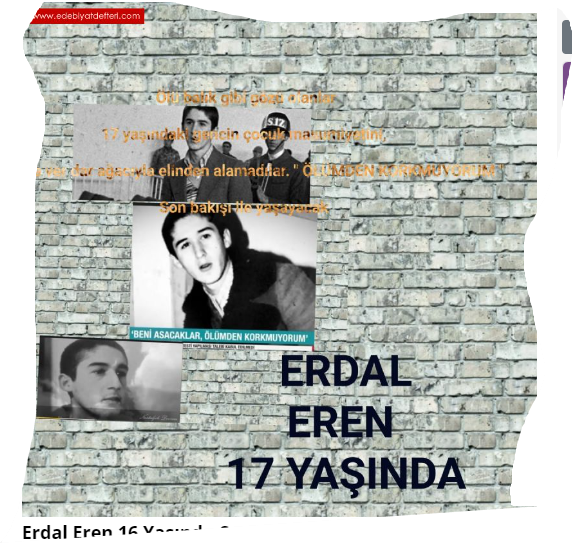 Bulent Karaalioglu
Tuesday, August 2, 2022
poem poems september
Download image of this poem.
Report this poem
COMMENTS OF THE POEM
See All Comments
READ THIS POEM IN OTHER LANGUAGES