In Days Of Robin Hood

In days of yore,
In days of Robin Hood,
A merry band of outlaws
Rambled throughout Sherwood forest
(Home of the Major Oak,
North of Windsor Castle,
And South of Hadrian's Wall) .

They dressed in Lincoln green,
And whistled in the greenwood glades.
And armed themselves with daggers and swords,
Cudgels, quarterstaffs, and longbows.
With which they used to rob from the rich
(Who took from the commoners, peasants and serfs)
And then cheerfully gave to the poor.

Prince John of England was furious
That they would usurp his authority,
And demanded that the Sheriff of Nottingham
Quell the adventurous company.
But to no avail could the Sheriff prevail
Against Robin Hood's strength and guile,
Who traipsed merrily upon the King's trails.

The yeomen knew they needed social structure,
Or they could not get along together.
To whom would they turn for judgment
When someone committed mischief?
Each to his or her own God willing,
And so they were willing to pay the taxes
For some resemblance of law and order.

But it was those that got too greedy,
And demanded more than they could give.
That threw the system out of kilter,
And caused tempers to boil over
Which led to bedlam, mayhem, and disorder.
But thanks to Robin Hood and his merry men,
And the barons of jolly old England;
They brought the tyrant King John to his knees
To seal the Magna Carta. 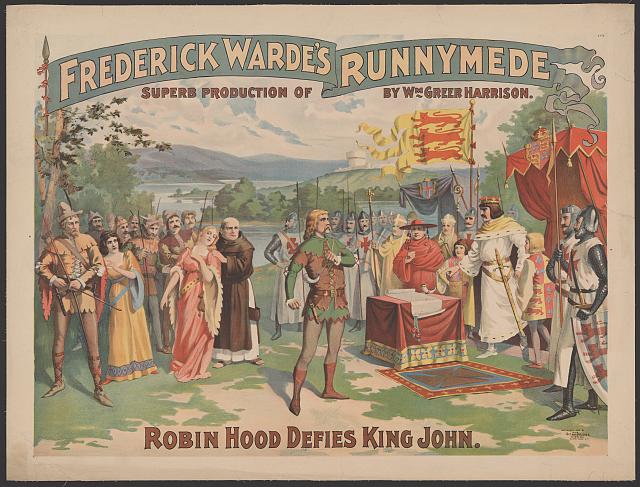 Dennis Spilchuk
Sunday, February 28, 2021
Download image of this poem.
Report this poem
Topic(s) of this poem: england,history,hero
POET'S NOTES ABOUT THE POEM
The "Magna Carta" was sealed at Runnymede (located 20 miles west of London, England) on June 15,1215. The document was the first instance where the king of England agreed to be subject of the laws of the land. "No free man shall be seized or imprisoned, or stripped of his rights or possessions…except by the lawful judgment of his peers. To no one will we sell, to no one deny or delay right of justice…"
READ THIS POEM IN OTHER LANGUAGES