The Woodpecker - Poem by Kim Barney

A knocking sound on the window sill,
When a moment before, all was still...
A startling sound that makes you leap,
Or even wakes you from your sleep:
This is the woodpecker.

A beautiful head - - - of brilliant red,
And a colorful body, too...
While he taps on, so noisily on,
Seemingly taunting you:
This is the woodpecker. 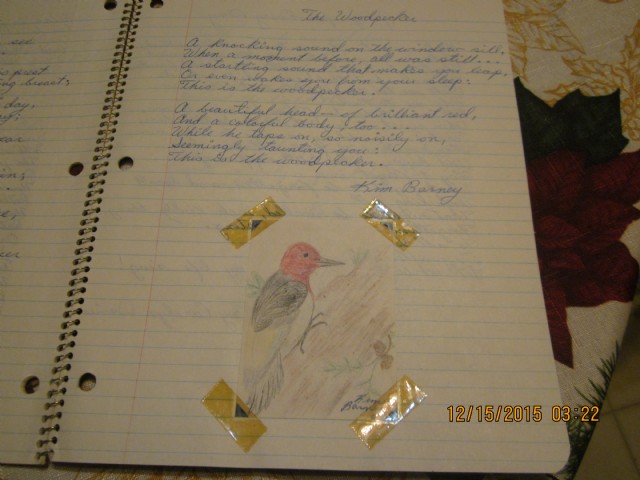 A few weeks ago I remembered that I had written a poem about a woodpecker when I was in the tenth grade and had also drawn a picture to go with it. I knew the poem was in a notebook in my basement somewhere, and I spent a couple of hours looking for it and could not find it.
Today I was in the basement for a totally different purpose and there was the notebook right in plain sight! I would have had to walk past it more than once the other day.
The tape I used to hold the picture (which I also drew on my own) in place on the page with the poem is dark and discolored with age. It was clear tape when it was applied. Remember, I wrote this poem in tenth grade, which was many, many years ago!
I was surprised to find another poem of mine in the notebook, called 'Kindness'. I had forgotten all about writing that one. It has already been posted to this website.
The clock in my camera is incorrect. It is still set for the time in Recife, Brazil, four hours later than Utah time right now.

Correction: (5: 19 p.m.15 Dec 2015) When I submitted the poem I said it had been done in eighth grade, because the notebook was almost identical to one I turned in that year. However, a more careful inspection of the notebook today revealed that it was done for my speech class, and tenth grade was the only year I had a speech class, so I apologize.
END_OF_DOCUMENT_TOKEN_TO_BE_REPLACED
User Rating:
5,0/ 5( 1 votes )2