Conversation between graveyard and body washers;

-Dude, can you tell me what you felt while washing a corpse?

At first I felt like I was in a strange, strange dream. The first dead boy I washed was a 6-year-old boy. I washed him, crying, trembling. How many years have passed, I still can't forget. It was very strange, my friend, with his tiny body he was very tired, death fatigue. He was just a child for life, he couldn't be tired, he was lively agile. I thought about death. I thought long and hard. I watched the coldness that spread from the child's face to his whole body.

Before I started this profession, I knew about death only as news. That is dead, may God have mercy. So much. I had never thought of what it was, I had never been able to think. I have been washing the dead for 30 years, but now, with the coldness of so many souls that have left this life, I look at the people in my life with the same eye. Someday they will die and I will wash them. I will think of their lives, their pain, their dreams, their joys.

Is it sad? After 30 years of doing this profession, you no longer feel sad, surprised and excited. I just spend my time in a frozen state just like the dead, feeling neither crying nor anything, just doing my job, until one day when I lie in the same place and be washed by someone else. The dead feed my stomach.

I make money thanks to them. But what is he thinking and feeling? I feel as if I am eating those dead people and I think that the food I have earned from this business is the life of that dead person and rush to the toilet to vomit with great pruritus and nausea. This has happened to me a lot. But without my help, spontaneously. I wash the dead until the evening, when I come home in the evening, I sleep, sleep and go to the dead wash again in the morning. My life is dead! I don't feel anything about the living creatures around me.

What about you, my gravedigger friend, tell me a little bit..

-We are considered to deal with the dead, though not as much as you. Previously, a thought, a paranoid thought, which haunted my mind while burying the dead, impressed me. It's like I was on the edge of the cliff, dead, throwing himself off the cliff, I can't hold back whatever I do. I lean over the edge of the cliff to make sure it doesn't fall, at that moment he pulls me by the collar and we both roll down the cliff. The dead person is crashing on the ground, and when I am just about to hit the ground, he is suddenly affected, I leave when he is haunted, I get startled, I find myself in a frightened state with my shovel in my hand. I was sweaty, the person holding the pickaxe next to me, what happened, something happened? she asks. Inside of me; What more can you get! Nothing - I say.

But over time, such situations passed in me as well as in you. Now I learned to jump hand in hand with the dead from that cliff. I won't crash anyhow. Of course, this is for a certain period of time. When the time comes, that abyss will jump from me, hit me, I will die. Sometimes when they bring the dead body for burial, I have to open the coffin and untie the shroud to make sure I am not the person lying under the coffin.

Dude, why did we come to this world? Are we officials of the consulate between the realm of the dead and the living? Half of us are death, half are life. After all these things, like you, I have never been married or even had a girlfriend until this age. We have given up all worldly desires, desires, dreams. My heart cannot bear that much, you understand, right? 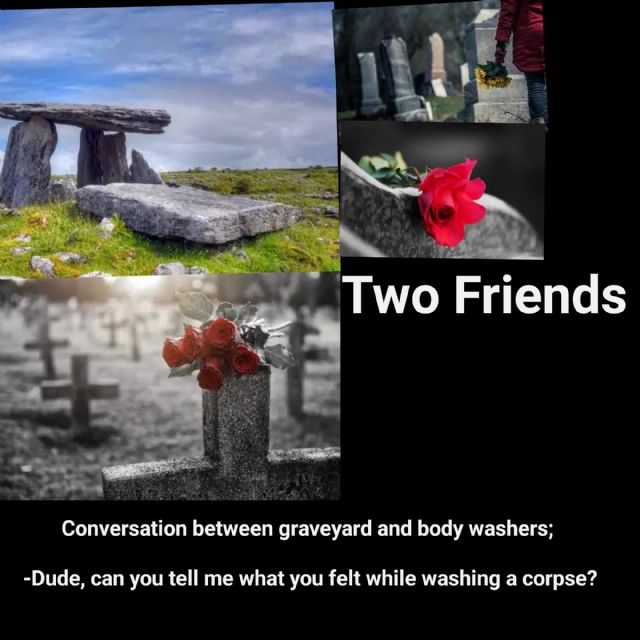 Topic(s) of this poem: death of a friend