We real cool. We
Left school. We
Lurk late. We
Strike straight. We
...

Read Poem
In Memory Of My Mother Patrick Kavanagh

I do not think of you lying in the wet clay
Of a Monaghan graveyard; I see
You walking down a lane among the poplars
On your way to the station, or happily
...

Yes, I remember Adlestrop --
The name, because one afternoon
Of heat the express-train drew up there
Unwontedly. It was late June.
...

My window-pane is starred with frost,
The world is bitter cold to-night,
The moon is cruel, and the wind
Is like a two-edged sword to smite.
...

When June comes dancing o'er the death of May,
With scarlet roses tinting her green breast,
And mating thrushes ushering in her day,
And Earth on tiptoe for her golden guest,
...

At midnight, in the month of June,
I stand beneath the mystic moon.
An opiate vapor, dewy, dim,
Exhales from out her golden rim,
...

No one's serious at seventeen.
--On beautiful nights when beer and lemonade
...

January brings the snow,
makes our feet and fingers glow.

Tell you what I like the best --
'Long about knee-deep in June,
'Bout the time strawberries melts
On the vine, -- some afternoon
...

What's the best thing in the world?
June-rose, by May-dew impearled;
Sweet south-wind, that means no rain;
Truth, not cruel to a friend;
...

O suns and skies and clouds of June,
And flowers of June together,
Ye cannot rival for one hour
October's bright blue weather;
...

whatever slid into my mother's room that
late june night, tapping her great belly,
summoned me out roundheaded and unsmiling.
is this the moon, my father used to grin.
...

I’ve watched the Seasons passing slow, so slow,
In the fields between La Bassée and Bethune;
Primroses and the first warm day of Spring,
Red poppy floods of June,
...

O Winter! frozen pulse and heart of fire,
What loss is theirs who from thy kingdom turn
Dismayed, and think thy snow a sculptured urn
Of death! Far sooner in midsummer tire
...

When storm-clouds rumble in the sky and June showers come down.
The moist east wind comes marching over the heath to blow its
bagpipes among the bamboos.
Then crowds of flowers come out of a sudden, from nobody knows
...

June was not over
Though past the fall,
And the best of her roses
Had yet to blow,
...

Gone, I say and walk from church,
refusing the stiff procession to the grave,
letting the dead ride alone in the hearse.
It is June. I am tired of being brave.
...

Mother: Alice, dear, what ails you,
Dazed and white and shaken?
Has the chill night numbed you?
Is it fright you have taken?
...

June 12th came and went yesterday…I imagine to most people it was just another date.
But like birthdays, anniversaries and holidays it's a day we should all celebrate.

This day's history began in Virginia with Mildred Jeter and Richard Loving who fell in love and thought it would be great to marry and spend their life together…but this was 1958.
...

At the height of June, early summer.
Here and there, it occurs the orchestra.
...

I was watching Nikki on Revelation TV at the end of
the Lunchtime Live show on UK Sky channel 581 on
Monday, the 6th of June 2022. I noticed something
amazing as she was praying with her eyes closed.
...

It was jazzy June and green butterflies, filled the air with magic.
Then butterscotch days were long, until the purple sunset panic.

Sunny June, when music festivals, were staged in shady parks;
...

A shelf cloud brazenly rolls over,
And doves above quicken for shelter.
Summer arrives with brash and boom.
In the stormy month of June.
...

June 12, victory of the Ballot over the Bullet.
The people spoke in one voice.
June 12, the day our votes counted.
June 12, mandate conceived, mandate stolen.
...

So you know how to say
how June says 'gherkins'
in 'A Painter Of Our Time',
John Berger spells it 'jerkuns'.
... 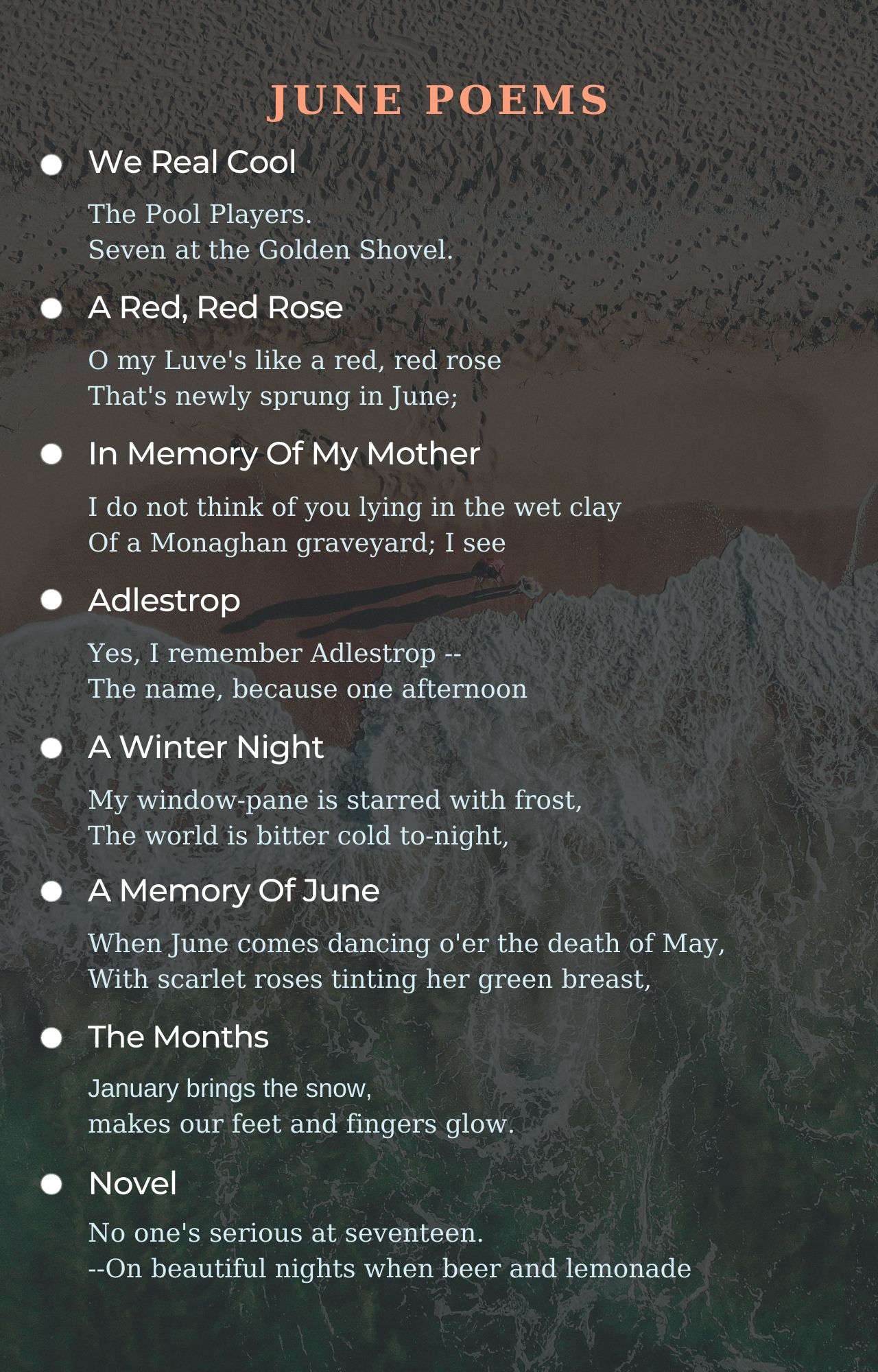