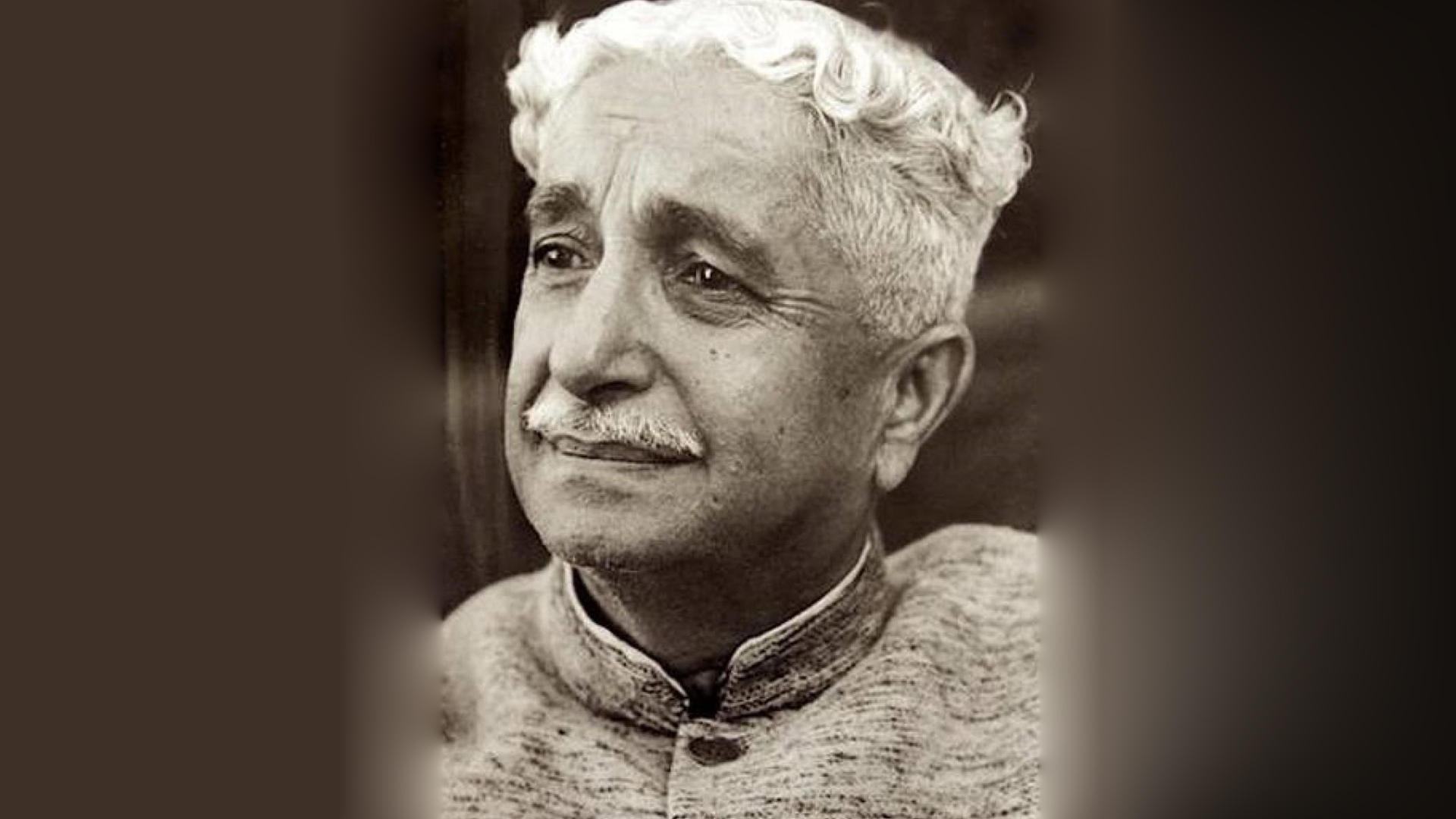 Oh mother, Blessed I am, to be born to you
Blessed is my soul, to be nourished by your love
I don't care if you are adorned like a queen
I don't care if thou grant every wish, like surabhi
...

Kuppali Venkatappagowda Puttappa, widely known by the pen name Kuvempu or by the abbreviation K. V. Puttappa, was a Kannada writer and poet, widely regarded as the greatest poet of 20th century Kannada literature. He is the first among eight recipients of Jnanpith Award for Kannada. Puttappa wrote all his literary works using the pen name Kuvempu. He is the second among Kannada poets to be revered as Rashtrakavi (after M. Govinda Pai). His work Sri Ramayana Darshanam, the rewriting of the great ancient Indian epic Ramayana in modern Kannada, is regarded as revival of the era of Mahakavya (Epic poetry) in a contemporary form and charm. He is immortalised by some of his phrases, and in particular for his contribution to Universal Humanism or in his own words Vishwa maanavataa Vaada. He was conferred Padma Bhushan by Government of India. He has penned the Karnataka State anthem Jaya Bharata Jananiya Tanujate. Early Life And Education Kuvempu was born in Hirekodige, Koppa taluk, of Chikmagalur district to a native Kannada family. His father Venkatappa Gowda of Kuppalli and mother Seethamma of Hirekodige a near by village. He was brought up in a place in the lush Malenadu region of Tirthahalli, called Kuppali, of Shivamogga district. His education began at his home by an appointed teacher from Dakshina Kannada. He joined Anglo Vernacular school in Tirthahalli to continue his middle school education. He lost his father Venkatappa Gowda at the early age of 12 due to ill health. Kuvempu finished his lower and secondary education in Kannada and English in Theerthahalli. He moved to Mysore for further education and completed his high school from the Wesleyan high school. He pursued his college studies in from Maharaja College of Mysore and graduated in 1929 majoring in Kannada. He married Hemavathi on 30 April 1937. Later Life He had two sons and two daughters, K P Poornachandra Tejaswi, Kokilodaya Chaitra, Indukala and Tharini. Tharini is married to K. Chidananda Gowda, the former Vice-Chancellor of Kuvempu University. He responded poetically to even mundane events. When he got a car, he is quoted to have said, "Chakracharanake swagatha!" - Welcome to wheel footed! He named his house as "Udayaravi", "Rising Sun", called the farmer "uluva Yogi" the "tilling Yogi", and called for egalatarian society in his message "Sarvarige samapaalu, sarvarige samabaalu" "Equal share for all, Equal life for all". His "Raso Vai Saha" is a famous work of "kavya mimamsa", the "Principles of literary criticism", in the Kannada thought of twentieth century. He is credited for giving Kannada hundreds of new words, phrases and terminologies with distinctly precise ideas; literary, social, philosophical and spiritual. This led to common people asking him to suggest a name for their newborns, for decades, through postal correspondece, which he obliged! Career Kuvempu began his academic career as a lecturer of Kannada language at Maharaja College of Mysore in 1929. He served as an assistant professor in central college of Bangalore from 1936. He rejoined Maharaja college of Mysore in 1946 as a professor. He went on to become a principal of Maharaja college in 1955. Soon in 1956 he was elected as the Vice-Chancellor of Mysore University where he served till retirement in 1960. He was the first graduate from Mysore University to rise to that position. Works and Message Kuvempu started his literary work in English first, with a collection of poetry called Beginner's Muse, and later switched to Kannada. He spearheaded Kannada as a medium for education, emphasizing the theme of "Education in Mother tongues". To cater to the needs of Kannada research, he founded the Kannada Adhyayana Samsthe (The Institute of Kannada Studies) in Mysore University, which has since been renamed after him as Kuvempu Institute of Kannada Studies. As Vice-Chancellor of Mysore University, he pioneered the study of Basic Sciences and Languages. He also championed the Publishing of knowledge for laymen, started by G. Hanumanta Rao. Kuvempu was more than a writer, and the way he lived his life was in itself a great message. He was against casteism, meaningless practices and rituals. Kuvempu's writings also reflect his resentment against the caste system according to which the "Shoodra Tapaswi" (1946) shudras were unfit to attain knowledge. Kuvempu (from the Vokkaliga community) also gives a different perspective to the characters in the Ramayana unlike the portrayal of characters by Valmiki in his Sri Ramayana Darshanam which won him Jnanpith Award. This work is the complete Ramayana in Kannada. It underscores his vision of sarvodaya (Upliftment of One & All). Rama of his Ramayana personifies this when he tests himself along with his wife Seeta, by jumping into the fire. O nanna chetana, Agu nee aniketana (ಓ ನನ್ನ ಚೇತನ, ಆಗು ನೀ ಅನಿಕೇತನ ) which can be translated as "Be unhoused o my soul, only the infinite is your goal" is a very popular note by Kuvempu on Universal Humanism. His speech during the convocation ceremony of Bangalore University has been published in the book, vichaarakranthige aahwaana. It calls for a re-assessment of developmental policies. Though it was delivered in 1974, the message is still considered relevant. In the year 1987, a new university was started in Shimoga district, Karnataka in the name of Kuvempu. It is located in Jnana Sahyadri campus, 28 km from Shimoga. His son Poornachandra Tejaswi was a polymath, contributing significantly to Literature, Photography, Calligraphy, Digital Imaging, Social Movements, and Agriculture. Awards Jnanpith Award - 1967 Padma Bhushan - 1958 Sahitya Akademi Award - 1955 National Poet - 1964 Pampa Award - 1987 Padma Vibhushan- 1988 Karnataka Ratna - 1992)

The Best Poem Of Kuvempu

Oh Mother, Blessed I Am, To Be Born To You

Oh mother, Blessed I am, to be born to you
Blessed is my soul, to be nourished by your love
I don't care if you are adorned like a queen
I don't care if thou grant every wish, like surabhi
All I know is my courtyard is filled with the fragrance
Of your sacred presence
Of the criticisms about your lacking, I am aware
The ridicules of being backward, you had to bear
Those adorned by gold, I shun
I regard you as the glorious one
In the luster of your eyes I open my eyes
With joy I'll grow in your holy land
Thy glory I'll pen; thy name I'll call
For the fortune of your service, I reject all

Where can I find translated versions of English poems..

ONE OF THE GREAT POET IN KANNADA LITERATURE. WHO FOCUS MAINLY ON NATURE, ''NATURE'S LOVER''.

very good poet in kannada litrature am once again says that kuvempu is my peot..