On the peat-heavy forest of ancient Exmoor
Rain fell with a fury like never before.
From under an impenetrable, lightning-lit pall
The encumbering deluge continued to fall.

The land gripped the water, but could hold it no longer
So bequeathed it to Gravity: a thousand times stronger.
Boulders and trees formed a dire, deadly host
And advanced down a cleft in the North Devon coast.

The innocuous and gentle twin rivers of Lyn
Had babbled and chattered for years without sin.
Now, heavy with weapons and gorged on raw power,
They joined forces to march on the old Rhenish Tower.

Death rode a wave one hundred hands high
Under that thunder-filled, flickering sky.
His infantry followed, of wood and of stone,
And down, with ferocity, the bridges were thrown.

Houses were cleaved as poor Lynmouth was scoured
While inside the cottages families cowered.
All those who were trapped and unable to flee
Were mercilessly thrown to the complicit sea.

As survivors were heartened by a dry, sunny dawn
To the dark, dirty estuary their wide eyes were drawn.
Now ranked in their hundreds were trees, torn away,
Conscripted by Nature and marched into the bay.

The village was cleared and the engineers came;
They built deep embankments to channel the rain.
But on nights when it's teeming and a storm's overhead
Some that remember still turn in their bed. 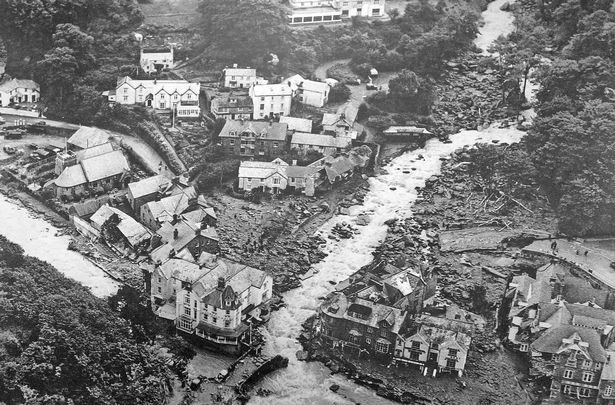 Richard Griffiths
Monday, March 8, 2021
Download image of this poem.
Report this poem
POET'S NOTES ABOUT THE POEM
One of my favourite parts of the country and site of a tragic natural disaster.
READ THIS POEM IN OTHER LANGUAGES