After a long journey in the wilderness,  I saw a beautiful tree on the path.  A sense of infinite peace brooded over the distance.  The glooming sun cast a rosy hue across the evening sky. Golden fingers of sunlight lit up the path with love, trust, and purpose, leading to this anomaly which made its intention fascinating.
It stood about 14 feet tall,
with low-spreading shrubs and long trailing branches.  Its evergreen needle-like leaves stirred with the breeze, bending but never breaking.  In such a way, it seemed to be telling a secret sweeter than the sea or the sky whispers,  and it was speaking to no one but me.
Respecting the command with one foot in front of the other.
I heard its words but could not interpret its language.  Ineffably stunned aesthetically because of its serenity and voice, Yet terror-stricken with the crystallizing approach.  The closer one drew, the calmer the Wind grew; the calmer one's Mind too.  Rapt- Halt , Where the acorns sprouted, then both ceased.  Invigorated to a state not sleep but resting,   not dead, just euthanized consciousness.
Letting go at the same time grabbing on, pessimistic, nevertheless optimistic, leaving and arriving, open-hand, still reluctantly
tight-fisted, selfless but stingy, lost but quickly found, rich but still broke  Somewhat HilArious, but this was no joke. - I AM-  Euphorically at peace, with no restrictions to time, space, or terra firma.  Just a gratifying sense of indisputable completeness;  and otherworldly delight. At last in the all this deep suffering, and get a ternal, please breeze really confidentially under this is scintillating tree. 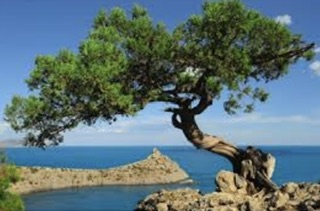