Looking To The Sky

- Sometimes I catch your gaze, long, long, hours of looking and thinking. What is in this sky that captures your eyes like this?

- Everything has its source. The beginning and end of everything. A being has no end, it has change. There is no death, there is change. Beings die only when they change, for that moment. And this death is a new birth after change. They die for that moment, they are born for the next. Change is born and lives between two moments immortal.

-I thought for a moment you were going to talk about the stars, the colors, the night and the day, the infinity of the sky, the depth.

- Didn't I mention them?

-Right, you're...But how many times have I caught your hour-long look? I mean, not for the first time. I don't know how long you'll look and think. Do you have a question, an answer you're looking for?

- I'll look at the sky until I die, until I die. Besides, I have not one, but many questions that gnaw at me day by day.

- It's worth it there, of course, but it's not exactly there. Ten percent is about God, and the rest is different.

-Even now my curiosity is piqued. What do you mean, these percentile parts are not the opposite of each other? I heard right, didn't I?

-Yes, you heard me right.

But ever since Man existed, he only thinks about the world, life, and God. But you put what other people think two hundred percent in a ten percent shroud. I'm really surprised. Why? And what do you think of as ninety percent?

It's really hard to explain, but it's not impossible. See, most people maintain the profession of Shepherd, before they manage to become a true shepherd. And there are sheep, not to mention them. I mean, it doesn't matter if you know it or if you're ignorant. I mean, you're a constant scholar in change, not a scholar. They are just continuing to evolve the thought lineage of the first people who thought and came up with ideas.I have no distinction between the ignorant and the learned except for the lives. And I think your real scholar is the one who creates an unknown, unique idea.

- Can you explain a little more?

-Sure. A lot of people have had great respect for Scholars in every age, but I don't see them any different than a flock of sheep. I see it as a flock of sheep that only think and evolve in thought, but that doesn't change that they are sheep. The one who follows the thought is the one who does not think. It is the thinker who creates thought. You know what I mean?

- I see. You really have a different mindset. And what about my other three questions? The question of percentile is, why ten percent God, why ninety percent other things, and what else are the Ninety Percent things you specify?

- Let me explain. Actually, I did, but you don't realize it. I'll tell you in more detail. Why ten percent God? So, do we have concrete evidence that God exists so that I can think of God one hundred percent until I die? What if there is no God? Then wouldn't I have wasted my entire life on something that doesn't exist? I hope you have the answer to your first question. As for your second question, I will say, why ninety percent other things? That's why life doesn't exist so that we can do a few things, set a few ideals, live for it, and believe in a few things. If you think about it, life and what we learn and learn in it don't even fit into life itself! That's why we die, life doesn't fit in our lives! I mean, there are so many of them that life, what you call God, can't sit on Ninety percent because a few billion people have believed! So I'm saying that there's not only God in this life, I'm in it, you're in it, we're in it. We have the universe, we have dreams, we have thoughts, we have. That's why I say ninety percent other things. I hope I've been able to express myself. The answer to your third question may seem a little more interesting when I hear the answer I will give you.

- All right, then listen up. You asked me what other things were that ninety percent. I just answered a few about life when I answered your second question. I want to come to other things as a thought. As I dive into the sky, I think, by throwing theses and trying to disprove these theses, can the universe have a very different meaning that is not what they teach us in life? Can what we know about all these planets, or what we think we know, be wrong or misunderstood from start to finish? Because if you Button the shirt wrong from the beginning, it's always so wrong. Until I realized it until. Maybe we've never noticed? Can't our brains work with a delusion mechanism? Wondering why our brains sat in one of their head seats for evolutionary reasons? If they asked the cat or dog who loved him very much, fed him, and owned him, and he could answer, would he say that my God is human? I think it says. Why isn't life enough for people and death enough? And such questions. I'll write theses and try to refute them. After all, just because a person looks at the sky will not think only of the sky.

- As if in some places you gave evasive answers, answers that wanted to hide your real opinion?

-Nothing escapes from your eye I'm looking at. Yeah, they're my own ideas, and I don't want to share them with anyone yet.

-Me, my eye misses nothing. Yep, I understand what you mean. Indeed, when you look at the sky and think for hours, you are in a great struggle, labor, and struggle. I should have known by the sharpness in your gaze. Thank you so much for this beautiful conversation, Goodbye, Mr. Elvis Javed.

- Oh, Where Are you going? And I caught you thinking about the land for a long time. I have a few questions about him, and you're also welcome.

- Please, forgive me today. It's so hard for me to leave your conversation... As Sappho said, " Believe me, my feet are going backwards..."I never want to go with you, but you know, it's late. Tomorrow I'll tell you all your questions and why I've been looking at the land so long. 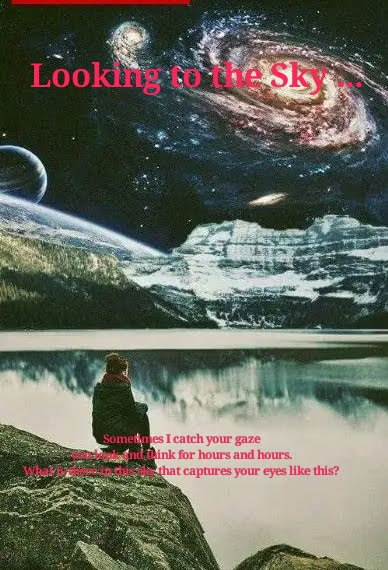 Topic(s) of this poem: idea

Looking To The Sky