The Auroras of Autumn Poem by Wallace Stevens 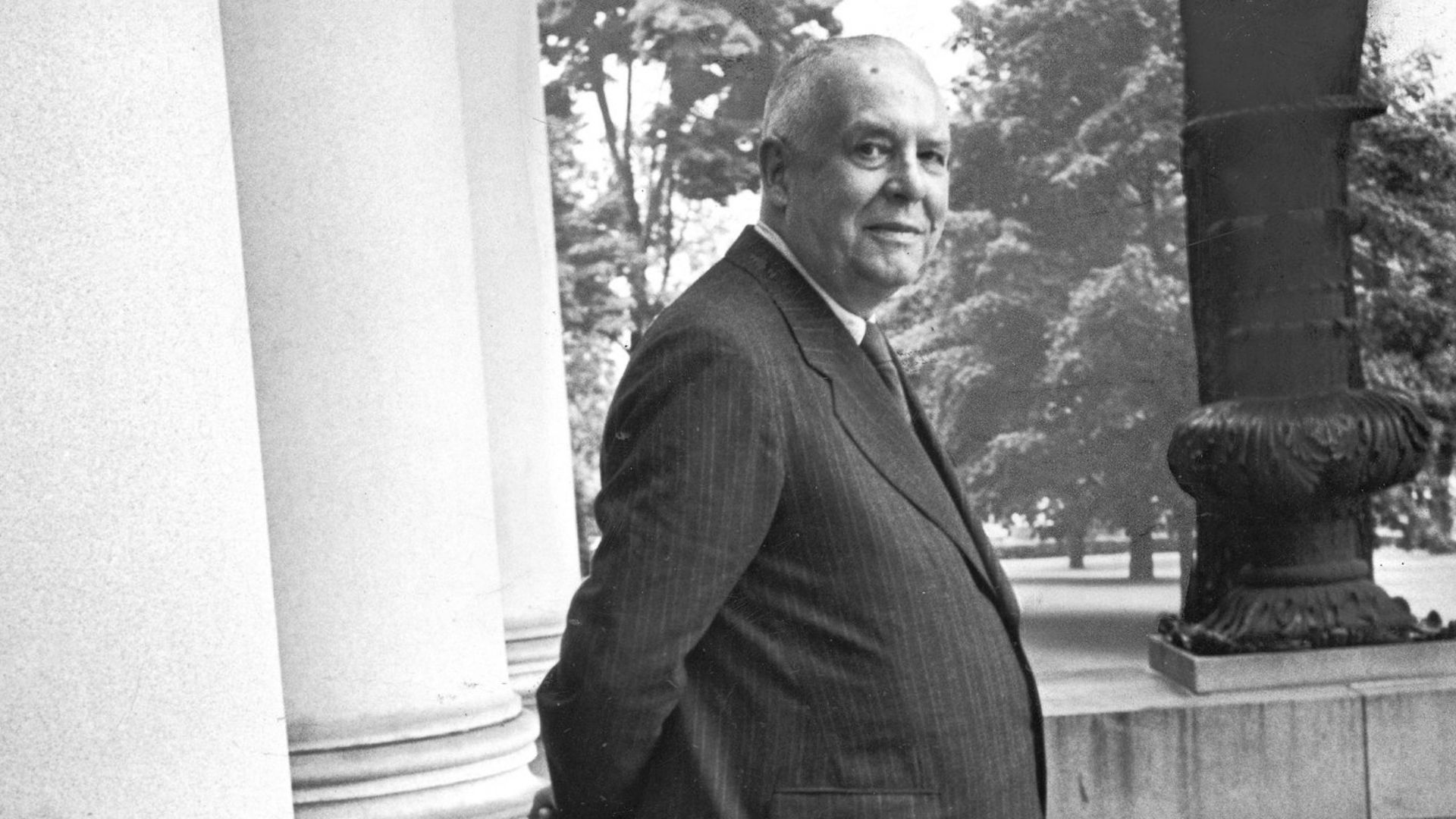 The Auroras of Autumn


This is where the serpent lives, the bodiless.
His head is air. Beneath his tip at night
Eyes open and fix on us in every sky.

Or is this another wriggling out of the egg,
Another image at the end of the cave,
Another bodiless for the body's slough?

This is where the serpent lives. This is his nest,
These fields, these hills, these tinted distances,
And the pines above and along and beside the sea.

This is form gulping after formlessness,
Skin flashing to wished-for disappearances
And the serpent body flashing without the skin.

This is the height emerging and its base
These lights may finally attain a pole
In the midmost midnight and find the serpent there,

In another nest, the master of the maze
Of body and air and forms and images,
Relentlessly in possession of happiness.

This is his poison: that we should disbelieve
Even that. His meditations in the ferns,
When he moved so slightly to make sure of sun,

Made us no less as sure. We saw in his head,
Black beaded on the rock, the flecked animal,
The moving grass, the Indian in his glade.

Farewell to an idea . . . A cabin stands,
Deserted, on a beach. It is white,
As by a custom or according to

An ancestral theme or as a consequence
Of an infinite course. The flowers against the wall
Are white, a little dried, a kind of mark

Reminding, trying to remind, of a white
That was different, something else, last year
Or before, not the white of an aging afternoon,

Whether fresher or duller, whether of winter cloud
Or of winter sky, from horizon to horizon.
The wind is blowing the sand across the floor.

Here, being visible is being white,
Is being of the solid of white, the accomplishment
Of an extremist in an exercise . . .

The season changes. A cold wind chills the beach.
The long lines of it grow longer, emptier,
A darkness gathers though it does not fall

And the whiteness grows less vivid on the wall.
The man who is walking turns blankly on the sand.
He observes how the north is always enlarging the change,

With its frigid brilliances, its blue-red sweeps
And gusts of great enkindlings, its polar green,
The color of ice and fire and solitude.

Farewell to an idea . . . The mother's face,
The purpose of the poem, fills the room.
They are together, here, and it is warm,

With none of the prescience of oncoming dreams.
It is evening. The house is evening, half dissolved.
Only the half they can never possess remains,

Still-starred. It is the mother they possess,
Who gives transparence to their present peace.
She makes that gentler that can gentle be.

And yet she too is dissolved, she is destroyed.
She gives transparence. But she has grown old.
The necklace is a carving not a kiss.

The soft hands are a motion not a touch.
The house will crumble and the books will burn.
They are at ease in a shelter of the mind

And the house is of the mind and they and time,
Together, all together. Boreal night
Will look like frost as it approaches them

And to the mother as she falls asleep
And as they say good-night, good-night. Upstairs
The windows will be lighted, not the rooms.

A wind will spread its windy grandeurs round
And knock like a rifle-butt against the door.
The wind will command them with invincible sound.

Farewell to an idea . . . The cancellings,
The negations are never final. The father sits
In space, wherever he sits, of bleak regard,

As one that is strong in the bushes of his eyes.
He says no to no and yes to yes. He says yes
To no; and in saying yes he says farewell.

But now he sits in quiet and green-a-day.
He assumes the great speeds of space and flutters them
From cloud to cloudless, cloudless to keen clear

In flights of eye and ear, the highest eye
And the lowest ear, the deep ear that discerns,
At evening, things that attend it until it hears

The supernatural preludes of its own,
At the moment when the angelic eye defines
Its actors approaching, in company, in their masks.

Master O master seated by the fire
And yet in space and motionless and yet
Of motion the ever-brightening origin,

Profound, and yet the king and yet the crown,
Look at this present throne. What company,
In masks, can choir it with the naked wind?

The mother invites humanity to her house
And table. The father fetches tellers of tales
And musicians who mute much, muse much, on the tales.

The father fetches negresses to dance,
Among the children, like curious ripenesses
Of pattern in the dance's ripening.

For these the musicians make insidious tones,
Clawing the sing-song of their instruments.
The children laugh and jangle a tinny time.

The father fetches pageants out of air,
Scenes of the theatre, vistas and blocks of woods
And curtains like a naive pretence of sleep.

Among these the musicians strike the instinctive poem.
The father fetches his unherded herds,
Of barbarous tongue, slavered and panting halves

Of breath, obedient to his trumpet's touch.
This then is Chatillon or as you please.
We stand in the tumult of a festival.

What festival? This loud, disordered mooch?
These hospitaliers? These brute-like guests?
These musicians dubbing at a tragedy,

A-dub, a-dub, which is made up of this:
That there are no lines to speak? There is no play.
Or, the persons act one merely by being here.

It is a theatre floating through the clouds,
Itself a cloud, although of misted rock
And mountains running like water, wave on wave,

Except the lavishing of itself in change,
As light changes yellow into gold and gold
To its opal elements and fire's delight,

Splashed wide-wise because it likes magnificence
And the solemn pleasures of magnificent space
The cloud drifts idly through half-thought-of forms.

The theatre is filled with flying birds,
Wild wedges, as of a volcano's smoke, palm-eyed
And vanishing, a web in a corridor

Or massive portico. A capitol,
It may be, is emerging or has just
Collapsed. The denouement has to be postponed . . .

This is nothing until in a single man contained,
Nothing until this named thing nameless is
And is destroyed. He opens the door of his house

On flames. The scholar of one candle sees
An Arctic effulgence flaring on the frame
Of everything he is. And he feels afraid.

Is there an imagination that sits enthroned
As grim as it is benevolent, the just
And the unjust, which in the midst of summer stops

To imagine winter? When the leaves are dead,
Does it take its place in the north and enfold itself,
Goat-leaper, crystalled and luminous, sitting

In highest night? And do these heavens adorn
And proclaim it, the white creator of black, jetted
By extinguishings, even of planets as may be,

Even of earth, even of sight, in snow,
Except as needed by way of majesty,
In the sky, as crown and diamond cabala?

It leaps through us, through all our heavens leaps,
Extinguishing our planets, one by one,
Leaving, of where we were and looked, of where

We knew each other and of each other thought,
A shivering residue, chilled and foregone,
Except for that crown and mystical cabala.

But it dare not leap by chance in its own dark.
It must change from destiny to slight caprice.
And thus its jetted tragedy, its stele

And shape and mournful making move to find
What must unmake it and, at last, what can,
Say, a flippant communication under the moon.

There may be always a time of innocence.
There is never a place. Or if there is no time,
If it is not a thing of time, nor of place,

Existing in the idea of it, alone,
In the sense against calamity, it is not
Less real. For the oldest and coldest philosopher,

There is or may be a time of innocence
As pure principle. Its nature is its end,
That it should be, and yet not be, a thing


It is like a thing of ether that exists
Almost as predicate. But it exists,
It exists, it is visible, it is, it is.

So, then, these lights are not a spell of light,
A saying out of a cloud, but innocence.
An innocence of the earth and no false sign

Or symbol of malice. That we partake thereof,
Lie down like children in this holiness,
As if, awake, we lay in the quiet of sleep,

As if the innocent mother sang in the dark
Of the room and on an accordion, half-heard,
Created the time and place in which we breathed . . .

And of each other thought—in the idiom
Of the work, in the idiom of an innocent earth,
Not of the enigma of the guilty dream.

We were as Danes in Denmark all day long
And knew each other well, hale-hearted landsmen,
For whom the outlandish was another day

Of the week, queerer than Sunday. We thought alike
And that made brothers of us in a home
In which we fed on being brothers, fed

And fattened as on a decorous honeycomb.
This drama that we live—We lay sticky with sleep.
This sense of the activity of fate—

The rendezvous, when she came alone,
By her coming became a freedom of the two,
An isolation which only the two could share.

Shall we be found hanging in the trees next spring?
Of what disaster in this the imminence:
Bare limbs, bare trees and a wind as sharp as salt?

The stars are putting on their glittering belts.
They throw around their shoulders cloaks that flash
Like a great shadow's last embellishment.

It may come tomorrow in the simplest word,
Almost as part of innocence, almost,
Almost as the tenderest and the truest part.

Here are too many mirrors for misery.
A happy people in an unhappy world—
It cannot be. There's nothing there to roll

On the expressive tongue, the finding fang.
A happy people in a happy world—
Buffo! A ball, an opera, a bar.

Turn back to where we were when we began:
An unhappy people in a happy world.
Now, solemnize the secretive syllables.

Read to the congregation, for today
And for tomorrow, this extremity,
This contrivance of the spectre of the spheres,

Contriving balance to contrive a whole,
The vital, the never-failing genius,
Fulfilling his meditations, great and small.

In these unhappy he meditates a whole,
The full of fortune and the full of fate,
As if he lived all lives, that he might know,

In hall harridan, not hushful paradise,
To a haggling of wind and weather, by these lights
Like a blaze of summer straw, in winter's nick.

I had thought that prophecy was dead, . that no one looks up any more.....his inward being is in the cosmos suspended on earth......the meeting place of all three....I can now understand the man of today, and hope.