The world believes that we were apes
Jumping on trees and eating grapes
And then from apes, we became MEN
A magic show from one to ten!

In ignorance, we live and we die
We look at the sky, we pray, we cry
But why we are born, we don't nd out why
Who are we, who is this "I"?

We don't go for a search and quest
And we don't put our beliefs to test
Whatever we are told, we believe the myth
We suffer because we don't know the Truth

But there were wise men, the Truth who knew
They were not many, they were just a few
They went on a quest to nd the Truth
They didn't just accept, went to the bottom of the root

Who is the Creator of this wonderful earth?
Who causes death, who gave us birth?
Yes, our mother and father were part of the plan
But this Divine work is not that of man

There is a power unknown to us
There is no doubt, let us not fuss
We don't know who, where and, what is God
But there is a Creator who is our Lord

There are some who believe 'to heaven we will go'
When we die at the end of the show
But where is heaven? Does anybody know?
And if the body stays here, then who will go?

There are others who believe that God is a man
Living in the skies doing what he can
Once in a while, he comes to earth
To fulfill our prayers, our joy, our mirth

And though we know Santa is a lie
We believe in the myth and don't ask why
We just exist, we live and die
Without asking the question of who and why

We have a body but that's not 'ME'
We are in fact, just energy
To nd this Truth is our Ultimate Goal
That we are, in fact, the Divine Soul

Moksha it was called many centuries ago
It was Liberation after death, this Truth we know
And then there would be no future birth
And we would not have to return to earth

Those who don't know are born again
The law of Karma is for all men
The law says what you sow, you reap
Good or bad, both we get to keep

And then came about the concept ‘Enlightenment'
Realizing the Truth, getting fulllment
It is about not being ignorant
And knowing the Truth for our betterment

From darkness to light we must go
What is the Truth, this we must know
For if we don't, as we live and die
We will suffer in misery and cry

Siddhartha was a Hindu king
Who refused to believe just everything
He went on a quest the truth to find
And awakened his consciousness, transcended his mind

For what is a human being's life meant?
Must we really take a spiritual bend?
Why must we know we are not body and mind?
What is the necessity of the Truth to nd?

It is important for us not to live like fools
We are blessed as humans, we are given tools
Discriminating with an intellect what is right and wrong
Questioning every thought, becoming spiritually strong

But it is really sad, we just live and die
What is our purpose, we don't nd out why
We are given this birth, who is this 'I'?
We just believe, living with the lie

And because of this ignorance, we are miserable and sad
We want to be happy, but we can't be glad
If the A to Z of spirituality we get to know
Then we will truly enjoy the show

This life is a special gift for us
It is not just a moving bus
Which starts at birth and death is the end
Each moment is precious, to be wisely spent

If we realize the Truth, that we are the Soul
Then we have achieved our Ultimate Goal
There will be Joy, Bliss, Love, and Peace
Misery and sorrow will completely cease 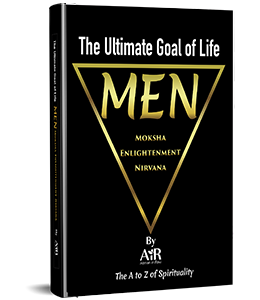 AiR Atman in Ravi
Wednesday, December 25, 2019
Topic(s) of this poem: spirituality
poem poems enlightenment
Download image of this poem.
Report this poem
POET'S NOTES ABOUT THE POEM
We live through lifetime often without realizing that we are the Soul. If only we asked the right questions and started out on a quest, we may attain Moksha, Nirvana, or Enlightenment - The Ultimate Goal of Life
COMMENTS OF THE POEM
Kingsley Egbukole 25 December 2019

I would like to translate this poem
Poems By AiR Atman in Ravi
A Simple Solution For World Peace!
Chicken Or Egg?
Be Happy In The Now!
I Am Not I. Who Am I?
Karma, Death And Rebirth
See All Poems by AiR Atman in Ravi
Next Poem
30 / 33
Previous Poem