Mirror mirror on the wall
Could you please return our ball
Our football went through your crack
You have two now
...

It is true love because
I put on eyeliner and a concerto and make pungent observations about the great issues of the day
Even when there's no one here but him,
And because
...

I know it's a bad title
but I'm giving it to myself as a gift
on a day nearly canceled by sunlight
when the entire hill is approaching
...

I take the snap from the center, fake to the right, fade back...
I've got protection. I've got a receiver open downfield...
What the hell is this? This isn't a football, it's a shoe, a man's
brown leather oxford. A cousin to a football maybe, the same
...

In the Shreve High football stadium,
I think of Polacks nursing long beers in Tiltonsville,
And gray faces of Negroes in the blast furnace at Benwood,
And the ruptured night watchman of Wheeling Steel,
...

"Is my team ploughing,
That I was used to drive
And hear the harness jingle
When I was man alive?"
...

Read Poem
The Heavy Bear Who Goes With Me Delmore Schwartz

The heavy bear who goes with me,
A manifold honey to smear his face,
Clumsy and lumbering here and there,
The central ton of every place,
...

Come dance to the drum.
Follow the steady heart beat,
By tapping the feet.
...

YOU can keep your antique silver and your statuettes of bronze,
Your curios and tapestries so fine,
But of all your treasures rare there is nothing to compare
With this patched up, wornout football pal o’ mine.
...

1
Wet heat drifts through the afternoon
like a campus dog, a fraternity ghost
waiting to stay home from football games.
...

Well I've told you someday I'd have a lotta money
And you would see me grinnin' from ear to ear
...

Joe Dunn were a bobby for football
He gave all his time to that sport,
He played for the West Wigan Whippets,
On days when they turned out one short.
...

Awake, of Muse, the echoes of a day
Long past, the ghosts of mem'ries manifold --
Youth's memories that once were green and gold
But now, alas, are grim and ashen grey.
...

Football is my favorite game
I love to watch them play -
Those tightly muscled butts and legs
On an awesome autumn day;
...

It were after the Battle of Crecy-
The foe all lay dead on the ground-
And King Edward went out with his soldiers
To clean up the places around.
...

You know the old story Ann Landers tells
About the houseife in her basement doing the wash?
She's wearing her nightie, and she thinks, "Well, hell,
I might's well put this in as well," and then
...

The emus formed a football team
Up Walgett way;
Their dark-brown sweaters were a dream
But kangaroos would sit and scream
...

"First, do no harm," the Hippocratic
Oath begins, but before she might enjoy
such balm, the docs had to harm her tumor.
It was large, rare, and so anomalous
...

Amanda, you did the Inaugural beautifully
Today, you'll be doing the Super Bowl superbly
Wow! You go girl: I wish you the very best
Because millions of football fans will, at last
...

Maradona, who mesmerised the world with his
Magnificent game of football,
Adored by millions of fans,
Admired world over for his skill and brilliance,
...

Charlie Strong football coach,  football player.
hoping into bowl game after bowl game with Louisville players.
athletes running hard to be one of his players.
reality is but a touchdown away with the right players.
...

They always do patronize the local pub
The fans and the members of the town's football club
Seated at the bar tables in small groups they talk of football
And little else matter much to them at all
...

Read Poem
For A Moment In Time - Nfl Colette Dright

NFL National Football League
Football allows the world and fans to witness historical moments in time. I am from New Orleans, home of the New Orleans Saints. Our historical moment in time came when we were able to endure and overcome defeat with triumph as we became the "Who Dat Nation" bringing home the Superbowl Championship in 2009. For the last 40 years the world was able to watch the transformation.

Our team went from boys to men
...

Jerry Kill football coach
eternity at the University of Minnesota
reality is a football game
reality is but a moment in time as a team
... 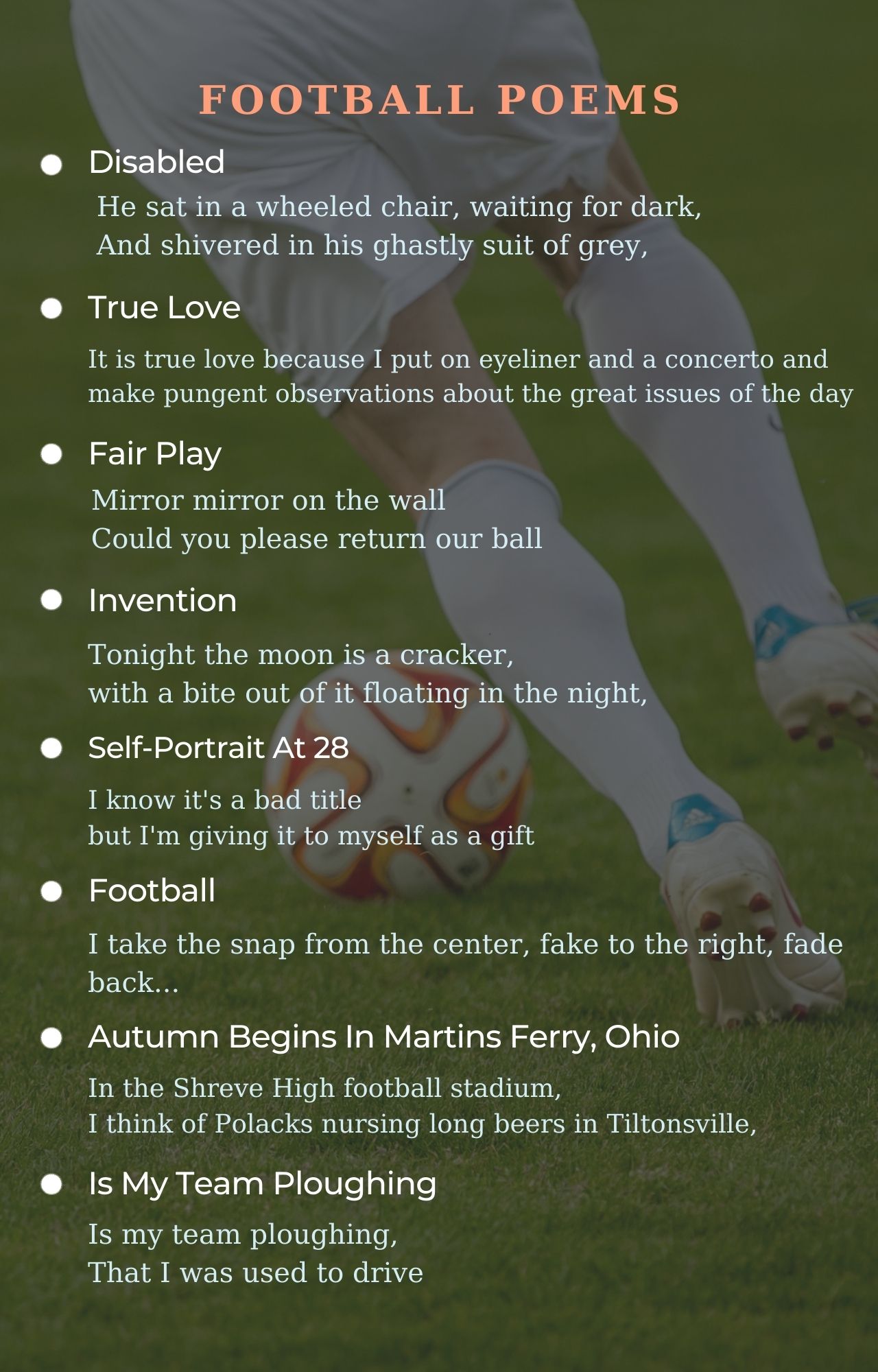