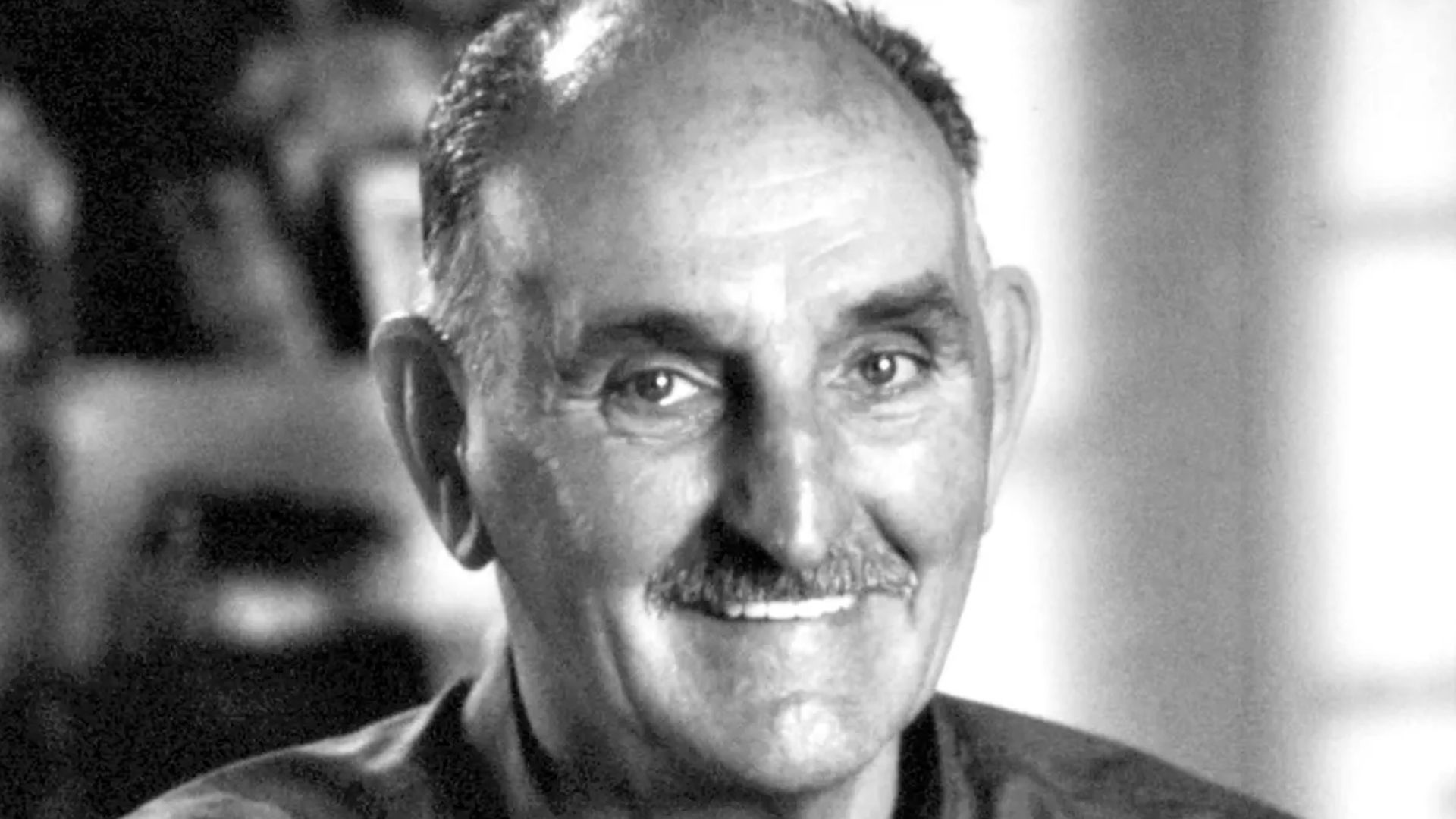 And when I say eyes right I want to hear
those eyeballs click and the gentle pitter-patter
of falling dandruff you there what's the matter
why are you looking at me are you a queer?
...

One constant in a world of variables
- A man alone in the evening in his patch of vegetables,
and all the things he takes down with him there
...

Read Poem
4.
Enter Without So Much As Knocking

Donald Bruce Dawe AO is an Australian poet, and is considered by many as one of the most influential Australian poets of all time. Early Life Bruce Dawe was born in Fitzroy, Melbourne in 1930. Bruce Dawe's mother and father were from farming backgrounds in Victoria and, like his own sisters and brother, never had the opportunity to complete primary school. He always had encouragement from them (the younger of his two sisters also wrote poetry) and his mother, proud of her Lowlands Scots ancestry, would often recite poems she had learned in her 19th century childhood. Dawe's father's ancestors came from Wyke Regis in Dorset, England, in the mid-19th century. Dawe attended six schools before leaving Northcote High School at 16 without completing his Leaving Certificate. Of the four children in the family, he was the only one to attend secondary school. Dawe was educated at Northcote High School, Melbourne. After leaving school at 16, he worked in various occupations (labourer, farmhand, clerk, sawmill-hand, gardener and postman) before joining the RAAF in1959. He left the RAAF in 1968 and began a teaching career at Downlands College, Toowoomba in 1969. He holds four university degrees (BA, MLitt, MA and PhD) - all completed by part-time study. He was appointed as Lecturer at the Darling Downs Institute of Advanced Education (DDIAE) in 1971, became a Senior Lecturer in1980 and an Associate Professor following the status change to the University of Southern Queensland. He was awarded the inaugural DDIAE Award for Excellence in Teaching in 1988. He retired from full-time teaching in 1993 and was appointed as the first Honorary Professor of USQ in recognition of his contribution to the University. He has taught U3A classes ever since his retirement from full-time teaching. Until he went to University on a teaching scholarship in 1954, he worked in a wide range of jobs: as a clerk in various firms, as well as a sales assistant, an office-boy in an advertising agency, and a copy-boy at Melbourne newspapers Truth and the Sun. He also worked as a labourer in the Public Works Department, as a tailer-out in various Melbourne saw-mills, and as a farm-hand in the Cam River valley. Dawe gained university entrance by completing his Adult Matriculation by part-time study in 1953 and enrolled at Melbourne University. He left university at the end of 1954 and moved to Sydney where he worked as a labourer in a glass factory and later in a factory manufacturing batteries. Returning to Melbourne in 1956, he worked as a postman for two years and as a self-employed gardener. Dawe joined the RAAF in 1959 as a trainee telegraphist, but re-mustered as an education assistant. He was posted to Malaysia and returned to Melbourne after six months. Teaching Leaving the RAAF in 1968, Dawe began teaching at Downlands College, a Catholic boys college—Dawe became Catholic in 1954—in Toowoomba, Queensland. After teaching English and History at secondary level for two and a half years, he became a tertiary lecturer in English Literature at the Darling Downs Institute of Advanced Education in Toowoomba. He taught there from 1971, retiring in 1993 as an Associate Professor at what had become the University of Southern Queensland. Personal Life Dawe married Gloria Desley Blain on 27 January 1964. Between Dec 1964 and Jul 1969, Bruce and Gloria had four children: Brian, twins Jamie and Katrina, and Melissa. Gloria died on 30 Dec 1997 after a long battle with cancer. Dawe has four degrees, all completed by part-time study: B.A. (Qld.), M.Litt. (U.N.E.), M.A. (Qld.), and Ph.D. (Qld.). He now teaches various literature courses in the U3A A (University of the Third Age, an organisation for senior citizens). Awards 1965 – winner of the Myer Poetry Prize 1967 – winner of the Ampol Arts Award for Creative Literature 1968 – winner of the Myer Poetry Prize 1973 – winner of the Dame Mary Gilmore Medal 1978 – winner of the Grace Leven Prize for Poetry 1979 – winner of the Braille Book of the Year 1980 – winner of the Patrick White Literary Award 1984 – winner of the Christopher Brennan Award 1990 – Paul Harris Fellowship of Rotary International 1992 – made an Officer of the Order of Australia: "In recognition of service to Australian literature, particularly in the field of poetry" 1996 – Alumni Award by the University of New England 1997 – winner of the inaugural Philip Hodgins Memorial Medal at the Mildura Writer's Festival 2000 – Australian Council for the Arts Emeritus Writers Award for his long and outstanding contribution to Australian literature 2001 – awarded the Centenary Medal for "distinguished service to the arts through poetry")

All day, day after day, they're bringing them home,
they're picking them up, those they can find, and bringing them home,
they're bringing them in, piled on the hulls of Grants, in trucks, in convoys,
they're zipping them up in green plastic bags,
they're tagging them now in Saigon, in the mortuary coolness
they're giving them names, they're rolling them out of
the deep-freeze lockers — on the tarmac at Tan Son Nhut
the noble jets are whining like hounds,
they are bringing them home
- curly heads, kinky-hairs, crew-cuts, balding non-coms
- they're high, now, high and higher, over the land, the steaming chow mein,
their shadows are tracing the blue curve of the Pacific
with sorrowful quick fingers, heading south, heading east,
home, home, home — and the coasts swing upward, the old ridiculous curvatures
of earth, the knuckled hills, the mangrove-swamps, the desert emptiness…
in their sterile housing they tilt towards these like skiers
- taxiing in, on the long runways, the howl of their homecoming rises
surrounding them like their last moments (the mash, the splendour)
then fading at length as they move
on to small towns where dogs in the frozen sunset
raise muzzles in mute salute,
and on to cities in whose wide web of suburbs
telegrams tremble like leaves from a wintering tree
and the spider grief swings in his bitter geometry
- they're bringing them home, now, too late, too early.

this guys a troll and a ballsack

What a wonderful man Dawes is to devote such heartfelt words to the things that he feels passion for and that have touched his heart. As for the other illiterates leaving comments; You people disgust me & are everything that is wrong with the world. Learn how to spell you brats! It's clear that you people will amount to nothing & I feel sorry for you. I wish someone cared enough about you to actually feel disappointed in you! .

'why are you looking at me are you a ? ' what kind of stanza is that?

this is a really cool poems

tati took my career, will womp womp womp for money!