A Doctor, Teacher, man ‘par excellence',
With passion for profession, common sense;
Compassion for all patients and brothers;
Respectable, He respected others.

A man of simplicity to the core,
In neurology, he rose to the fore;
God-fearing man, he lived in piety;
He loved to share his ken, do charity.

He taught his pupils well in easy way;
He laboured hard to master it each day;
Not after money, but he earned a lot;
In sharing knowledge, selfish, he was not.

Well-read, erudite, he had no ego;
A workaholic, humane human, Oh!
Both sympathetic, empathetic too;
In pleasant ways, all persons, he would woo!

He condescended, healed by Midas touch;
Accessible always and friendly much;
He had a golden heart, envied by rest;
As Neuro-physician, he turned one best.

He loved his students, patients and his peers;
In academics, he was amongst seers;
Most lovable, he earned soon name and fame;
If something went wrong, he would take the blame!

Some forty years ago, he had come here
To Coimbatore, where he did rarely err;
Adept and dexterous, he diagnosed well;
His super treatment, all patients will tell.

A soul with noble mind and broad a heart,
He practised Medicine as science and art.
A doctor humane seldom can we see;
A humble doctor, rarely one can be.

Exemplary, a role-model to most;
A party to his students, he would host;
Enviably, he practised until late;
The end by Covid-19 came - His fate!

His graph of achievements was always steep;
That he's no more makes us to only weep;
He was polite, avoiding polity;
As tall figure, he stayed in society!

Awards, rewards on earth may not suffice;
The Healer, God had blessed him without vice!
He followed ethics, till he breathed his last;
Alas! the virus took his life off fast.

A man of science, he lived all life sans pride;
A doctor great, in God, he did abide;
Adored by all, a noble life he led;
His void will stay long, now that he is dead!

Most lovingly dedicated to the noble soul,
Which has left to its heavenly abode;
On behalf of all medicos, colleagues, medical fraternity and
Specially ‘the 1974 Batch of MBBS, CBE.' 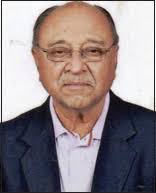