Click For The Best Poems ❱❱
Next Poem
22 / 93
Previous Poem

Sometimes the memory's gone. You get a call
for a country cemetery - no one knows
where anything is. No plat-book shows
the early graves. A man has just been hauled
away, and his children have turned up a deed
to a plot in the oldest part, where the names
have vanished from the stones. Now, it's a game
to find the proper place among the weeds.
Most undertakers carry a thin rod, bent
at one end of form an L-shaped handle;
it works best after there's been a rain.
You push it through until the other end
makes contact. It's like holding a candle
down there, somewhere, on a long chain.

Once a lawyer came to see us with a will
directing that in Prophet Township, a grave
be located, and opened. A brooch, encaved
for sixty years, now by this codicil
would be reclaimed. But first it must be found,
and no one knew its whereabouts. The place
was old; tree roots and weather had erased
and rearranged the markers on that ground.
After a day of rain, after reaching deep
but finding no answers with that thin steel,
I stopped in the village, and asked for a man
I had been told about. In a kind of sleep,
holding out a willow wand, he could feel
water, far below, rising toward his hands.

He was old, and wanted no money. We stood
in the rain. 'Do you need anything? ' I asked.
'The will itself? The name? ' His face, a mask,
showed nothing. He walked off toward the woods,
following the fork, and wandered half an hour,
pausing at different times, as though listening.
Then he came to a stop, rooted, glistening
with raindrops, arms trembling with power.
We brought it up. It was the one. Next day
the lawyer came, and we pried off the lid
and left him there, alone, to look within
and find the thing that brought him all that way.
Far off, the dowser watched us from the ridge.
We put it back, and smoothed the earth again. 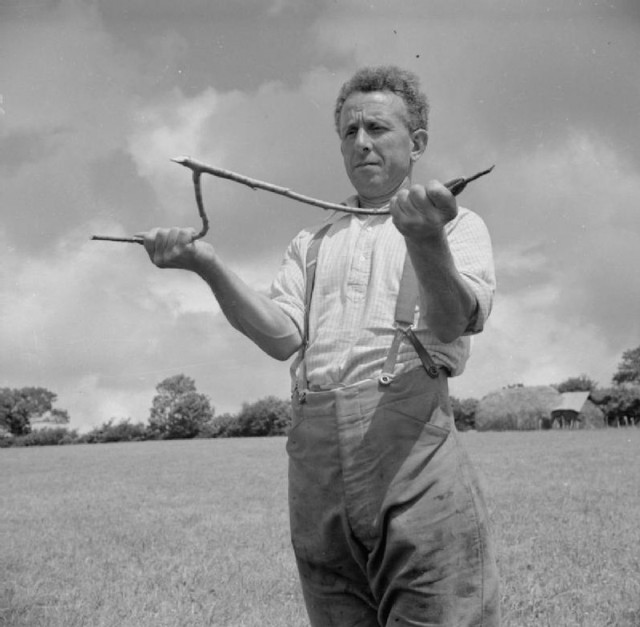 Jared Carter
Tuesday, April 25, 2017
Topic(s) of this poem: cemetery,countryside,rural
poem poems woods
Download image of this poem.
Report this poem
READ THIS POEM IN OTHER LANGUAGES