When I am an old woman I shall wear purple
With a red hat which doesn't go, and doesn't suit me.
And I shall spend my pension on brandy and summer gloves
And satin sandals, and say we've no money for butter.
...

Take some Picts, Celts and Silures
And let them settle,
Then overrun them with Roman conquerors.
...

No stir in the air, no stir in the sea,
The Ship was still as she could be;
Her sails from heaven received no motion,
Her keel was steady in the ocean.
...

Now Jones had left his new-wed bride to keep his house in order,
And hied away to the Hurrum Hills above the Afghan border,
To sit on a rock with a heliograph; but ere he left he taught
His wife the working of the Code that sets the miles at naught.
...

More and more frequently the edges
of me dissolve and I become
a wish to assimilate the world, including
you, if possible through the skin
...

The state with the prettiest name,
the state that floats in brackish water,
held together by mangrave roots
that bear while living oysters in clusters,
...

When we two parted
In silence and tears,
Half broken-hearted
To sever for years,
...

Ah, what can ail thee, wretched wight,
Alone and palely loitering?
The sedge is withered from the lake,
And no birds sing.
...


They lie, the men who tell us in a loud decisive tone
That want is here a stranger, and that misery's unknown;
For where the nearest suburb and the city proper meet
...

They put a leather belt around her
13 feet of tape and bound her
Handcuffs to secure her
And only God knows what else,
...

Oh, what a dawn of day!
How the March sun feels like May!
All is blue again
After last night's rain,
...

As Parmigianino did it, the right hand
Bigger than the head, thrust at the viewer
And swerving easily away, as though to protect
What it advertises. A few leaded panes, old beams,
...

It is a winter's tale
That the snow blind twilight ferries over the lakes
And floating fields from the farm in the cup of the vales,
...

Now the new chum loaded his three-nought-three,
It's a small-bore gun, but his hopes were big.
"I am fed to the teeth with old ewe," said he,
"And I might be able to shoot a pig."
...

Leave me, my blamer,
For the sake of the love
Which unites your soul with
That of your beloved one;
...

Maveric Prowles
Had Rumbling Bowles
That thundered in the night.
It shook the bedrooms all around
...

Oh what can ail thee, knight-at-arms,
Alone and palely loitering?
The sedge has withered from the lake,

God Is Neither A Conservative Nor A Liberal Roxanne Dubarry

Our God is, 'neither a conservative nor a liberal.' He has followers in both camps! Therefore, God also must have followers within the moderate camps as well! 'Conservatism is not Christianity! ' Therefore neither is Patriotism! Because neither conservatism nor patriotism can take the place of genuine Christianity!

Both sides are guilty of being filled with both resentment and pride towards their opposite sides! God would want both polarized political points of view! Instead to show kindness and compassion towards one another! After all are we not all brothers and all sisters within the body of Christ! We should not let different political points of view to cause divisions among-st all of us!
...

If you need to be sued and criminal charges brought against you, then i suggest you stop right now. Think i'm playing cause the law ain't. Test the law if you want. This is a warning and take down your literature right now as I have copyright and you are infringing plus stalking and harassing like many members on this site. Try me. If you don't take down the literature then i will contact the website owner and pursue charges by law.
...

Straining is the drain.
Sustaining to remain,
Pointless.
To complain,
...

Dry leaves on a tree
That's what we see
In the wrong season
What is the reason?
...

theft lying deceit are all part of an ancient pastime
in a less tolerant age theft could get you crucified
nailed to a cross a cruel warning permanent solution
...

Trigger Warning:
"I put my first boyfriend away"
I say at parties because I am a dangerous girl.
Because I am better at Russian roulette than beer pong.
...

So there it is, Claire it is as you feared
All these years of wonder, then closure draws near
A quiet kind of distance, a word I would not touch:
Did I ever know my son at all? Well now I know too much
... 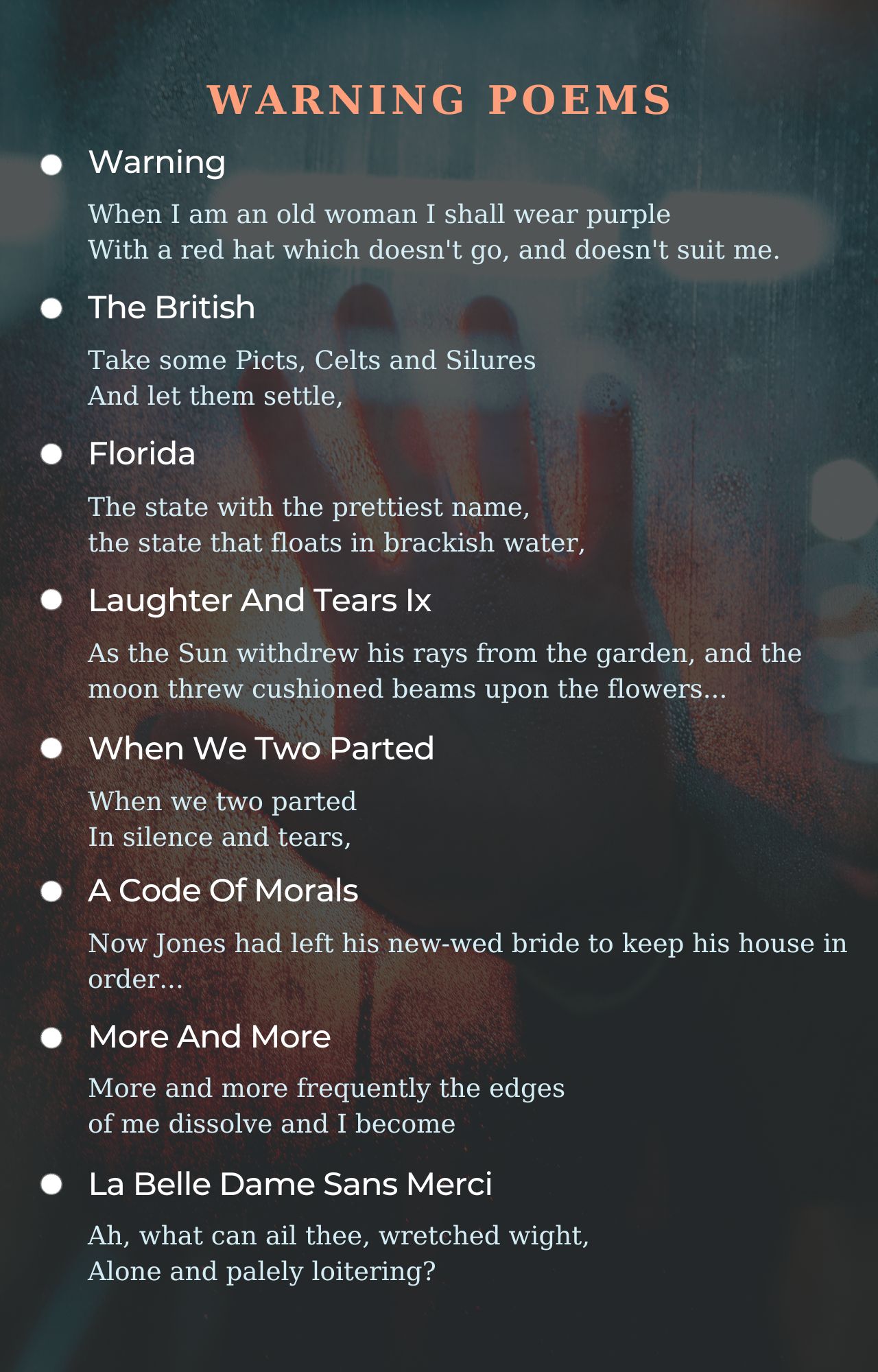