Click For The Best Poems ❱❱
Next Poem
9 / 93
Previous Poem

As Others See Us

which is actually a small galaxy
only 180,000 light years distant
from our own galaxy - then

according to astronomers, when
you looked out, 'the Milky Way
would be a spectacular sight.'

Our own galaxy would span
thirty-six degrees of the night sky,
or the width of seventy full moons.

It would have an apparent magnitude
of minus 2.0, making it brighter than
any star visible in our own skies.

It would be viewed at an angle
but in full, and entirely free from
interference by interstellar dust.

Brilliant and clear, dominating
the heavens entirely, it would be
a vast spiral of unmoved light.

And the question now would be -
having witnessed this presence
throughout your life, from infancy

Would it enter into your thoughts,
your dreams? How would you behave,
with this vision always before you?

We have, of course, no images of our own galaxy, the Milky Way, as seen from deep space, and as suggested in the poem. Instead, the photograph below shows the Andromeda Galaxy, largest of the Local Group of galaxies, which includes the Milky Way and the Triangulum Galaxy. Among a dozen smaller galaxies in the Local Group are the Large and Small Magellanic Clouds, which were known to observers in many traditional cultures. In the West, their sighting in Earth's southern skies was reported by the Italian explorer Antonio Pigafetta, who accompanied the expedition of Ferdinand Magellan on its circumnavigation of the globe in 1519-1522. The two galaxies were subsequently named after Magellan. 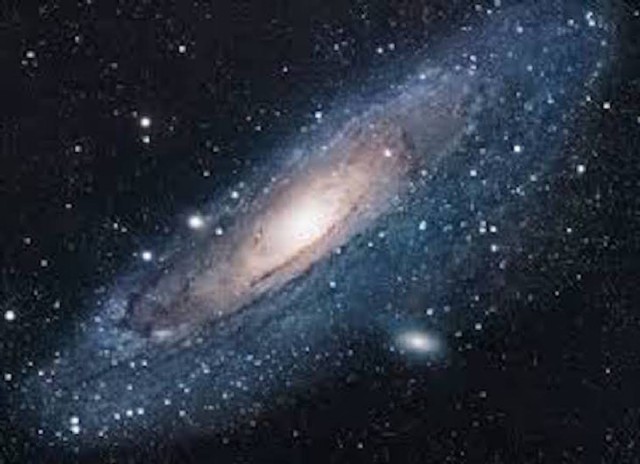 A broader outlook indeed. Thanks

An outstanding poem! An incredible thought! Insightful, dreamy, beautiful, the canopy above us and the almost taken for granted aspect exploded here in poetry. Amazing! Thank you Jared!