Click For The Best Poems ❱❱
Next Poem
24 / 93
Previous Poem

In a cold empty room, down
in the basement, the janitor
had rigged up an old buffer
from the shoe factory - it was
a whitewashed room, the walls
made of blocks of limestone -
a room with nothing else in it,
only the bare concrete floor,
and a pair of windows level
with the playground, that let in
some light - and when we had
to stay after school, because
we had done something wrong,
and after we had washed the boards,
two of us would lug the erasers
down the stairs in a wooden box,
and switch on the old buffer,
and take turns holding the erasers
against the revolving wheel.

All the words that had been
written on the board that day,
all the numbers, all the names
put up there and talked about
and then erased, all the letters -
all of that whiteness came back
for just a moment, swirling
around us. There was only
the motor's dull electric hum
and a cloud of billowing dust
that felt cool, and soft, and heavy,
and settled on us like a whisper.
We could stick out our tongues,
and catch it, like snow. It tasted
like a room filled with nothing,
nothing at all. Then it was time
to climb back up the stairs,
and go home, and not tell anybody.


The postcard image below shows Washington Elementary School in Elwood, Indiana, as it appeared in about 1909. Jared Carter attended grades 2 through 6 in this building, from the fall of 1945 to the spring of 1950. Originally constructed in 1894, in the influential late style of American architect H. H. Richardson, Washington School was one of five such new schools erected during a period of affluence and population growth ushered in by the town's natural-gas boom in the 1890s. The other four schools were named Central, Osborne, Edgewood, and Linwood.

This local advancement in public education was overseen by the town's superintendent of schools, attorney Hermann Willkie, whose son Wendell Willkie subsequently rose in the world of business to become the Republican Party's candidate for U.S. President in 1940.

Of the five original school buildings put up in the 1890s, only Washington School remains standing today - minus its bell tower, which was removed in the 1930s. Presently the building serves as a warehouse for the online bookstore, Story Shop, and as a residence for the bookstore's proprietors. 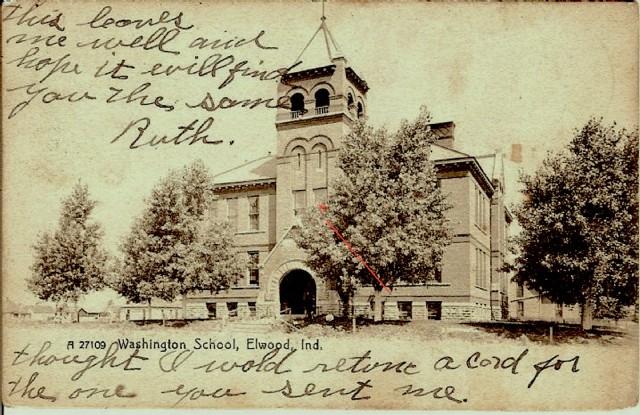 I love the poem and the people who occupy that building today!

We love having this building! What a beautiful poem, Jared!