Now have I come again, after
these many years -
Still loyal, but with the laughter
and all the tears

Of life behind me now. Come here
to place anew
These flowers on your grave. No fear
that what was true

Back then will not outlast the night.
My head, though hoar,
Is still unbowed; your stone is white
and as before.


First published in The Long Story.


Below: Diane Carter at the grave of Walter Savage Landor (1775-1864) in the English Cemetery in Florence. Jared Carter first visited Landor's grave in May of 1964, and returned in November of 2012.

During this second visit the Carters were privileged to make the acquaintance of the longtime protector and preserver of the cemetery, Julia Bolton Holloway, who accompanied them to Landor's grave, and showed them several adjacent graves, including those of Victorian poets Elizabeth Barrett Browning and Arthur Hugh Clough.

Landor's gravestone was provided by poet Algernon Charles Swinburne (1837-1909) , who greatly admired the older poet and his work. Swinburne's poem, 'In Memory of Walter Savage Landor, ' refers to their meeting in Florence in 1864. Swinburne was 27 at the time; Landor was 89.

Swinburne's poem describes his thoughts on learning of the elder poet's death in September of 1864 - thoughts, Swinburne writes, that were directed from 'The youngest to the oldest singer / That England bore.'

Two concluding quatrains of Swinburne's tribute to Landor serve as the latter's epitaph, visible in the photograph:

And thou, his Florence, to thy trust
Receive and keep,
Keep safe his dedicated dust,
His sacred sleep.

So shall thy lovers, come from far,
Mix with thy name
As morning star with evening star
His faultless fame.

The form of the quatrain employed by Swinburne - alternate lines of four and two iambs rhyming abab - is followed in Jared Carter's tribute to Landor. In homage to the two nineteenth-century poets, Carter has introduced the Alexandroid form, consisting of three such quatrains, and has published many poems in this form. 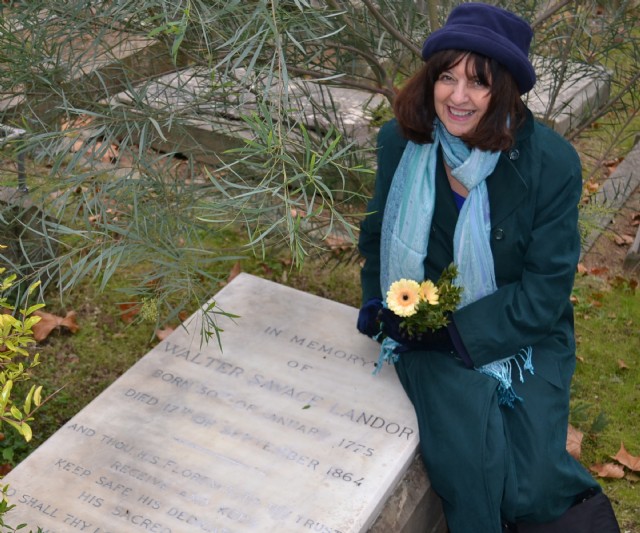 Jared Carter
Wednesday, May 10, 2017
Topic(s) of this poem: literature,poets,tribute
poem poems Poets september November
Download image of this poem.
Report this poem
COMMENTS OF THE POEM
See All Comments
READ THIS POEM IN OTHER LANGUAGES