Legends Of The Wrestling Ring Poem by Mark Heathcote

Legends Of The Wrestling Ring

Martin Austin Ruane
reigning out of County Mayo,
in the 1970s and 1980s ring name Giant Haystacks
he was a mean-looking man of Irish decent
he was a wrestler weighing in at 31 stone?
Once seen, he was-never-forgotten.

A devout Catholic who refused to wrestle on Sundays
he consumed three pounds of bacon
and a dozen eggs each morning just-to-sustain
his mammoth size and strength.
In his retirement, he worked in Manchester as a debt-collector
similar to Rocky, you might think.

He had a long-running feud with Big Daddy,
and every Saturday, we kids would tune into the telly
our excitement was at a fever pitch
if these two were ever-billed-against-each-other
Big Daddy had a record-breaking 64-inch chest
and was the first child of a burly blacksmith's daughter.

Shirley Crabtree was his real name
and like the Cash song 'A Boy Named Sue.'
He too-also-was-bullied, so it was bullying that toughened him up
and he learned the hard way to defend himself.
Big Daddy was a firm favourite with the children,
and Giant Haystack's past tag-team mate wasn't about to do him any favours. 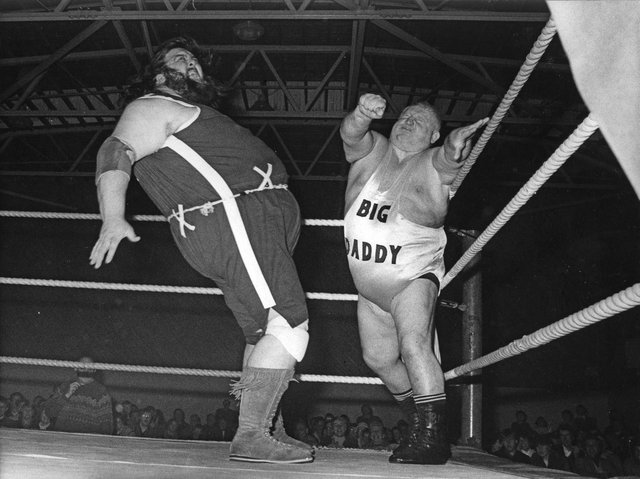 Mark Heathcote
Sunday, May 8, 2022
poem poems fever retirement Bullying
Download image of this poem.
Report this poem
READ THIS POEM IN OTHER LANGUAGES