Kill me Instead - said she to them,
kneeling before those armed police officers
a nun said to them - kill me instead of the children,

as fear, terror and horror prevails in Myanmar
where water cannons, tear gas keep targeting protestors
live rounds of bullets are also on their policemen's index;

some protestors have sustained injuries, some died
some got detained for raising their voices
yet they keep shouting, seeking democracy and freedom;

even a nineteen year old girl - Mya Thwe died
when she got hit by a bullet in her head
when she was sheltering herself from a water cannon;

her death was such a tragedy caused by the Myanmar police
who were firing live ammunition directly at protesters
and she was amidst them not expecting to be a victim;

will losing such a young life in its prime ever be justified?
where was mercy and compassion hiding its way?
where had respect for lives and safety wandered away?

And as those protests continued more and more,
even a nun came rushing and stood before
those armed police officers;

kneeling before them in the dust,
the nun - Sister Ann Rose begged the police officers
to spare 'the children' and take her own life instead;

is self-sacrifice what democracy envisages?
can people's right to protest peacefully ever be curbed?
can the common grievance of an entire nation be ignored?

or will the tens of thousands of people
who have taken to the streets of cities
across the country also be victims of bullet shots?

as those orders read - ‘shoot till they are dead;
is this what the ears of any Constitution ever want to hear?
is this what violence can do to suppress the voices of people?

is this what our eyes must watch and feel no concern?
or is this what the fate of Myanmar will be
that one by one will either keep facing death and injustice?

Is this the price one has to pay
for demanding democracy and freedom to live peacefully
in their own country with their own brethren? 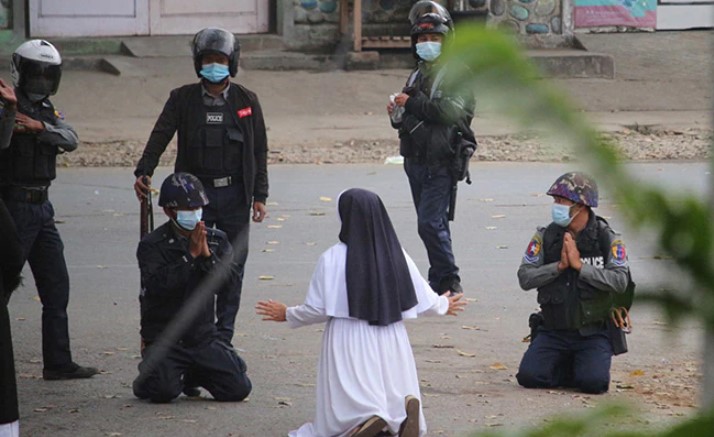 Bernedita Rosinha Pinto
Thursday, March 11, 2021
Download image of this poem.
Report this poem
READ THIS POEM IN OTHER LANGUAGES