Near Perigord Poem by Ezra Pound 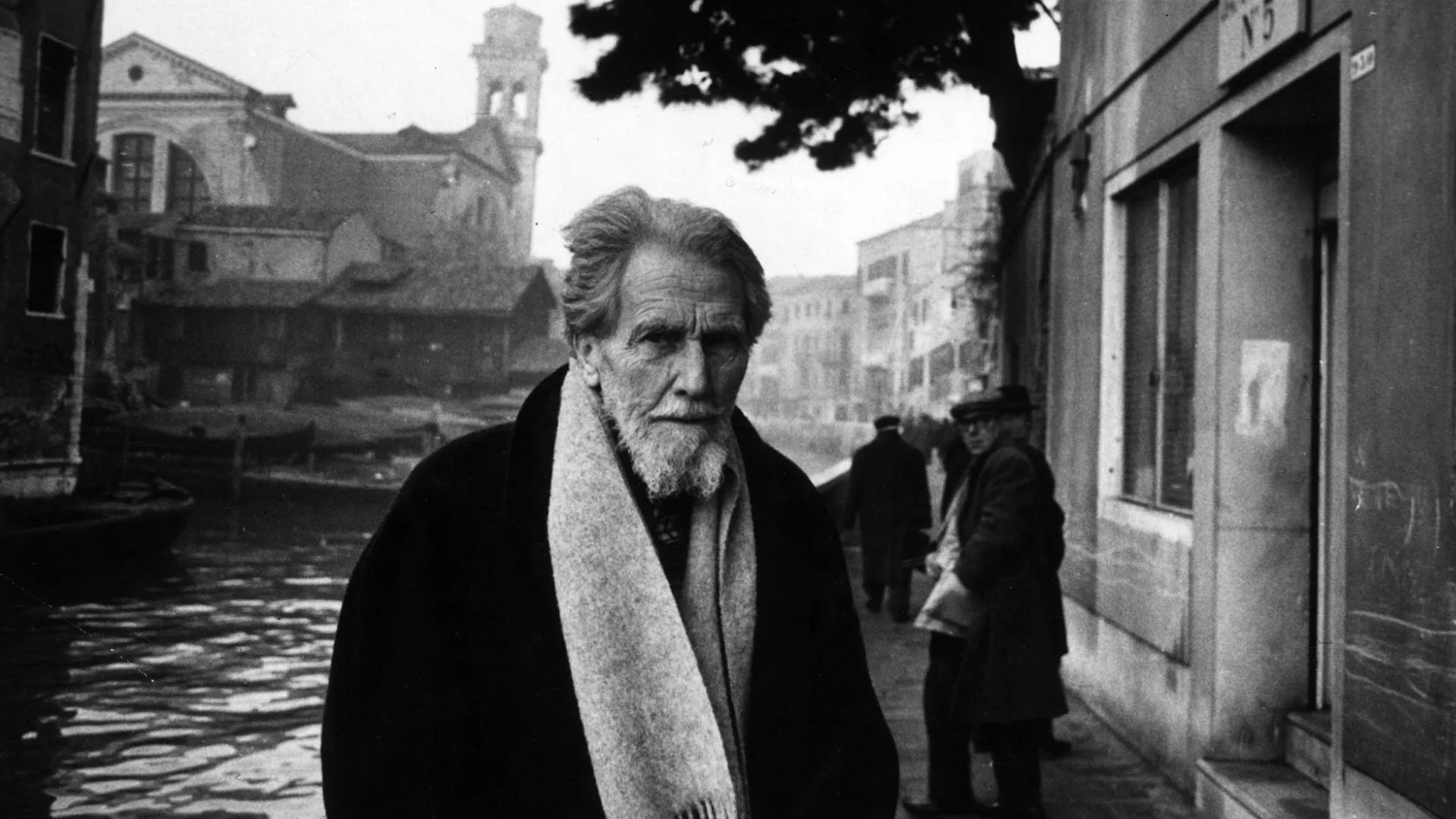 
I
You'd have men's hearts up from the dust
And tell their secrets, Messire Cino,
Rigkt enough? Then read between the lines of Uc St. Circ,
Solve me the riddle, for you know the tale.

Bertrans, En Bertrans, left a fine canzone:
6Maent, I love you, you have turned me out.
The voice at Montfort, Lady Agnes' hair,
Bel Miral's stature, the viscountess' throat,
Set all together, are not worthy of you. . . .'
And all the while you sing out that canzone,
Think you that Maent lived at Montaignac,
One at Chalais, another at Malemort
Hard over Brive for every lady a castle,
Each place strong.

Oh, is it easy enough?
Tairiran held hall in Montaignac,
His brother-in-law was all there was of power
In Perigord, and this good union
Gobbled all the land, and held it later for some hundred years.
And our En Bertrans was in Altafort,
Hub of the wheel, the stirrer-up of strife,
As caught by Dante in the last wallow of hell
The headless trunk 'that made its head a lamp',
For separation wrought out separation,
And he who set the strife between brother and brother
And had his way with the old English king,,
Viced in such torture for the 'counterpass'.
How would you live, with neighbours set about you
Poictiers and Brive, untaken Rochecouart,
Spread like the finger-tips of one frail hand;
And you on that great mountain of a palm
Not a neat ledge, not Foix between its streams,
But one huge back half-covered up with pine,
Worked for and snatched from the string-purse of Born
The four round towers, four brothers mostly fools
What could he do but play the desperate chess,
And stir old grudges?
‘Pawn your castles, lords!
Let the Jews pay.'
And the great scene
(That, maybe, never happened!)
Beaten at last,
Before the hard old king:
'Your son, ah, since he died
''My wit and worth are cobwebs brushed aside
'In the full flare of grief. Do what you will.'

Take the whole man, and ravel out the story.
He loved this lady in castle Montaignac ?
The castle flanked him he had need of it.
You read to-day, how long the overlords of Perigord,
The Talleyrands, have held the place; it was no transient fiction.
And Maent failed him? Or saw through the scheme?

And all his net-like thought of new alliance?
Chalais is high, a-level with the poplars.
Its lowest stones just meet the valley tips
Where the low Dronne is filled with water-lilies.
And Rochecouart can match it, stronger yet,
The very spur's end, built on sheerest cliff,
And Malemort keeps its close hold on Brive,
While Born, his own close purse, his rabbit warren,
His subterranean chamber with a dozen doors,
A-bristle with antennae to feel roads,
To sniff the traffic into Perigord.
And that hard phalanx, that unbroken line,
The ten good miles from there to Maent's castle,
All of his flank how could he do without her?
And all the road to Cahors, to Toulouse?
would he do without her?

‘Papiol,
Go forthright singing Anhes, Cembelins.
There is a throat; ah, there are two white hands;
There is a trellis full of early roses,
And all my heart is bound about with love.
Where am I come with compound flatteries
What doors are open to fine compliment?'
And every one half jealous of Maent?
He wrote the catch to pit their jealousies
Against her; give her pride in them?

Take his own speech, make what you will of it
And still the knot, the first knot, of Maent?

Is it a love poem? Did he sing of war?
Is it an intrigue to run subtly out,
Born of a jongleur's tongue, freely to pass
Up and about and in and out the land,
Mark him a craftsman and a strategist?
(St. Leider had done as much as Polhonac,
Singing a different stave, as closely hidden.)
Oh, there is precedent, legal tradition,
To sing one thing when your song means another,
'Et albirar ab lor bordon '
Foix' count knew that. What is Sir Bertrans' singing?
Maent, Maent, and yet again Maent,
Or war and broken heaumes and politics?

II
End fact. Try fiction. Let us say we see
En Bertrans, a tower-room at Hautefort,
Sunset, the ribbon-like road lies, in red cross-light,
Southward toward Montaignac, and he bends at a table
Scribbling, swearing between his teeth; by his left hand
Lie little strips of parchment covered over,
Scratched and erased with al and ochaisos.
Testing his list of rhymes, a lean man? Bilious?
With a red straggling beard?
And the green cat's-eye lifts toward Montaignac.

Or take his 'magnet' singer setting out,
Dodging his way past Aubeterre, singing at Chalais
In the vaulted hall,
Or, by a lichened tree at Rochecouart
Aimlessly watching a hawk above the valleys,
Waiting his turn in the mid-summer evening,
Thinking of Aelis, whom he loved heart and soul . . .
To find her half alone, Montfort away,
And a brown, placid, hated woman visiting her,
Spoiling his visit, with a year before the next one.
Little enough ?
Or carry him forward. 'Go through all the courts,
My Magnet,' Bertrans had said.

We came to Ventadour
In the mid love court, he sings out the canzon,
No one hears save Arrimon Luc D'Esparo
No one hears aught save the gracious sound of compliments.
Sir Arrimon counts on his fingers, Montfort,
Rochecouart, Chalais, the rest, the tactic,
Malemort, guesses beneath, sends wrord to Cceur-de-Lion:
The compact, de Born smoked out, trees felled
About his castle, cattle driven out!
Or no one sees it, and En Bertrans prospered?

And ten years after, or twenty, as you will,
Arnaut and Richard lodge beneath Chalus:
The dull round towers encroaching on the field,
The tents tight drawn, horses at tether
Further and out of reach, the purple night,
The crackling of small fires, the bannerets,
The lazy leopards on the largest banner,
Stray gleams on hanging mail, an armourer's torch-flare
Melting on steel.

And in the quietest space
They probe old scandals, say de Born is dead;
And we've the gossip (skipped six hundred years).
Richard shall die to-morrow leave him there
Talking oftrobar clus with Daniel.
And the 'best craftsman' sings out his friend's song,
Envies its vigour . . . and deplores the technique,
Dispraises his own skill? That's as you will.
And they discuss the dead man,
Plantagenet puts the riddle: 'Did he love her?'
And Arnaut parries: 'Did he love your sister?
True, he has praised her, but in some opinion
He wrote that praise only to show he had
The favour of your party; had been well received.'

Ends our discussion. Arnaut ends
‘In sacred odour' (that's apocryphal!)
And we can leave the talk till Dante writes:
Surely I saw, and still before my eyes
Goes on that headless trunk, that bears for light
Its own head swinging, gripped by the dead hair,
And like a swinging lamp that says, 'Ah me!
I severed men, my head and heart
Ye see here severed, my life's counterpart.’
Or take En Bertrans?

III
Bewildering spring, and by the Auvezere
Poppies and day's eyes in the green 6mail
Rose over us; and we knew all that stream,
And our two horses had traced out the valleys;
Knew the low flooded lands squared out with poplars,
In the young days when the deep sky befriended.
And great wings beat above us in the twilight,
And the great wheels in heaven
Bore us together . . . surging . . . and apart . . .
Believing we should meet with lips and hands,

High, high and sure . . . and then the counter-thrust:
‘Why do you love me? Will you always love me?
But I am like the grass, I can not love you.'
Or, ‘Love, and I love and love you,
And hate your mind, not you, your soul, your hands.'

So to this last estrangement, Tairiran!

Ezra Pound
Thursday, April 1, 2010
poem poems Separation
Download image of this poem.
Report this poem
COMMENTS OF THE POEM
See All Comments
READ THIS POEM IN OTHER LANGUAGES

I would like to translate this poem
Poems By Ezra Pound
Canto I
A Pact
In A Station Of The Metro
The River-Merchant's Wife: A Letter
Before Sleep
See All Poems by Ezra Pound
Next Poem
139 / 250
Previous Poem