It was a white wooden building two stories tall - two long, high-ceilinged rooms, one on each floor, topped by a flat tarpaper roof that sloped toward the back of the property.

Where I grew up, such structures were called 'storefront buildings.' Surrounded by elms and maples, it stood a block west of the courthouse, on the northwest corner, facing east. Originally it had been a lodge hall. During the Depression years, the members of the lodge had gradually died off, and the building stood empty until one of my relatives, an uncle who was an artist, acquired it, a few years before the war, and had it fixed up as a studio.

My parents drove us down to this place to visit the artist's widow in the late 1940s. The town and the building were always the same. There were no sidewalks. My father parked at the edge of the lot. Out front, rising from its square of stone, was the cast-iron pump with the curved handle. Here we would drink cold water from our cupped hands, and refresh ourselves, each time we came to visit.

If the light slanting beneath the canopy of trees seems clear and steady now, it is not simply because I look back on that vanished building through a scrim of fifty years, so that all the wrinkles and irregularities have been smoothed out. We forget not only what certain trees mean to a landscape, to the profile they give to a town; we forget even the quality of light filtering down through their leaves and branches.

One kind of illumination reaches down when you are a small child playing beneath the limbs of a catalpa tree; another kind settles over you at the base of a willow, or a shagbark hickory. Later, it is almost as though hidden voices had been speaking to you, pointing out certain shadows and profiles - the outlines of small, undiscovered things, the shapes of beetles and lost marbles and blades of grass.

I say this because I know there were elms reaching over the summer studio, and I know they are gone now, all of them. But their handling of the light remains unchanged.

If you asked me to describe that light, I would say that it was notched, pieced together like the irregular swatches and squares of silk and satin and calico that interlock to form the pattern of an old quilt. The stitching along the edges of each of those pieces, even the smallest, would be minute and exact.

There was the light, and the stillness, and the simplicity. Inside, the rooms of the old building were always cool, even on the warmest days. Looking back, I sometimes think of it as an enormous block of ice cut from some snow-covered lake and mysteriously preserved until summer was at its height - a day in late July, with cicadas shimmering in the trees.

But it had been left in that grassy place, as though overlooked or forgotten, and it melted at a glacial rate. Ultimately it was doomed to disappear, but it was still so vast and impermeable that it would take years, or even decades, sitting there among the lilacs and the forsythia, to shrink away.

Most of that great sun-dappled cube of a building has dwindled and grown dim now, even in my memory, but here and there I can still see a milky patch, a section of white clapboard gleaming with opalescent light.

I say this because I know there were elms reaching over the summer studio, and I know they are gone now, all of them. But their handling of the light remains unchanged.
Read More

Or I will find myself peering into one of the windows, a square grown blank with sunlight, and gradually it will change, as though a cloud were passing over the sun, or as though tree limbs overhead had begun to stir in a cool wind, rearranging the shadows and reflections below.

At such moments each pane of the window turns clear, and I can see inside, and remember.


First published in The Aurora Review.


The image below is of the painting 'In the Studio' (1882) , one of several such interiors painted by the prominent American artist William Merritt Chase (1849-1916) , who was born in Ninevah, Indiana, and who for many years maintained a well-known studio in the Tenth Street Studio Building located at 51 West 10th Street between Fifth and Six Avenues in Manhattan.

The studio had previously been occupied by Albert Bierstadt. In imitation of artists' studios Chase had visited in Europe, he filled the space with lavish furniture, decorative objects, stuffed birds, oriental carpets, and exotic musical instruments. It served as a focal point for the sophisticated and fashionable members of the New York City art world of the late 19th century. Among Chase's notable friends in American art were Frank Duveneck, Winslow Homer, and Augustus Saint-Gaudens.

By 1895 the cost of maintaining the studio, in addition to his other residences, forced Chase to close it and auction the contents. But the idea of having such a studio lived on. The concept of a studio filled with paintings, furnishings, and numerous objets d'art, exerted a considerable influence on decorative style in American art - one subsequently imitated by many younger painters in the periods preceding and following the First World War.

The summer studio in Nashville, Indian, of the artist Glen Cooper Henshaw (1880-1946; born in Windfall, Indiana) - described in the prose poem above, and also in the poem 'Hawkbill Knife' - was in direct line of descent from William Merritt Chase's original Tenth Street Studio of the 1890s.

Or I will find myself peering into one of the windows, a square grown blank with sunlight, and gradually it will change, as though a cloud were passing over the sun, or as though tree limbs overhead had begun to stir in a cool wind, rearranging the shadows and reflections below.
Read More 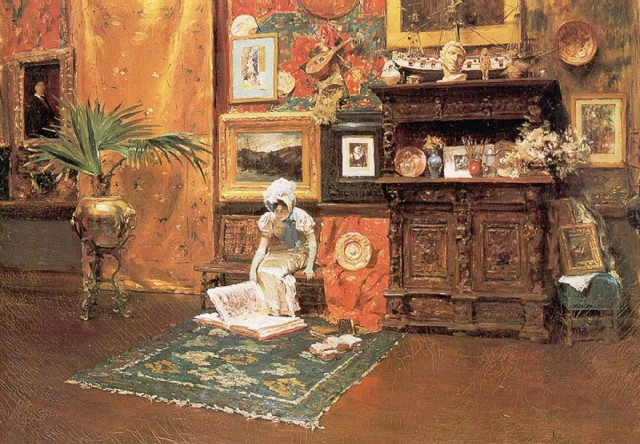 Jared Carter
Wednesday, April 12, 2017
Download image of this poem.
Report this poem
Topic(s) of this poem: america,remembrance,art
poem poems
READ THIS POEM IN OTHER LANGUAGES

I KNOW this place. I've been there many times, and each time it feels more intimate, more a part of my soul. bit it grieves my heart to know that even this place which brings out the good in all of us is subject to change, then decay, finally collapse. But that is the way of the world. And everything we cherish is really flesh, it cannot last, it cannot prevail. But flesh illumined by light! ! Flesh united with light! ! That's the imaginative merger your poem makes possible. And your prose poem makes me feel the truth of what Rilke said: EVERYWHERE TRANSIENCE PLUNGES INTO DEEP BEING.