Under a blazing sun near the shade of a tree
we both stood there talking of reality.
It didn't seem likely that we would ever stop
as the discussion held was over the top.
The topics we touched on were so often ignored
by all those who did not pretend to be bored.

First were the shackles of attachment and desire
that accounted always for much of hell's fire.
Next were the feelings of jealousy, pride and lust
that caused all those afflicted to swell or bust.
The last three paved the way for both anger and greed
which were often blamed for many a low deed.

But the main culprit was a person's ignorance
that keeps the light of knowledge at a distance.
We also mentioned those states of impurity
found in all those people who failed to see
the consequences of their thoughts, words and actions
which bring on so many dis-satisfactions.

Though it could be argued in favor of one's birth
that each of us is subject to on this earth.
The result of which is what seeds we all have sown
in previous lives; Realized Ones make known.
This is referred to here as the wheel of karma
we're all burdened with and reap like a farmer.

There were also those features of duality
that all things fall under in reality.
This is mostly known as the world of opposites
and our universe is made up of these bits.
Some examples we mentioned were so obvious
as one's ignorance and knowledge were to us.

Which brought us to the company we all do keep
that many don't ever recognize and sleep
with strange bedfellows we could really do without
meaning those things we accumulate about.
The things we need the most are not all that we get
and those who fall under this show some regret.

Then we broached the subject of one's faith and belief
things that people go to such lengths for relief;
in their quest for happiness leave no stone unturned
usually depending on what they have learned.
Though it's through experience people find the truth,
by self effort and grace, that's hidden since youth.

Most of the people in the world only look outside
and miss the splendor that within them does hide.
When they get to pierce the darkness of closed eyes
and learn the technique that opens inner skies
they will see other worlds along with this one too
within a light that's seen only by a few.

A person must be committed to the true path
shown by a Master who knows the aftermath.
Unless one happens to find it all by one's self
being rare indeed like jumping to top shelf.
There are so many paths and all do lead somewhere;
only those on the straight and narrow get there.

Then we began to talk about the Word of God
that sound of the Creator which may seem odd.
Although many people hold such radical views
about this and confuse it with what they choose.
The pulse of the universe is the sound of Om
the Word of the Creator it has sprung from.

That also includes some form of revelation
which can be vouchsafed to one for citation.
God is infinite and has limitless power,
which is rarely used or sent like a shower
down onto the earth at a particular time
when special people are born to us sublime.

We ended up by talking all about Pure Love;
a path that brings down the Divine from above.
As all those who practice it daily in their life
will know the Truth of It in the midst of strife.
It doesn't matter what circumstances exist
at any such time; one just has to persist.

Glory be to God Who gives the highest wisdom
and by His Grace shows us the way to freedom.
God is so compassionate and all merciful
that with His Love everything is possible.
All glory and praise be to that Eternal Being
Who alone exists and hides from false seeing.
______________________________ 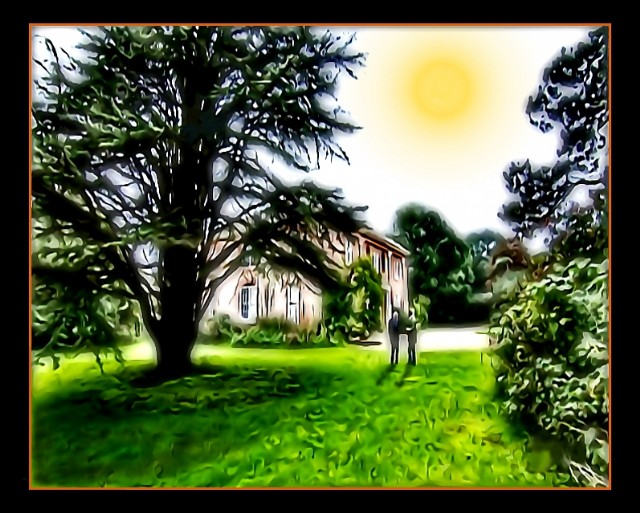 George Krokos
Monday, February 22, 2016
Topic(s) of this poem: reality,spirituality,talking
poem poems Jealousy
Download image of this poem.
Report this poem
Poems By George Krokos
Autumn Whispers
Simple Observation #136 - We All Tend To Make Matters......
Quatrain #493 - Without Some Kind Of.....
Haiku #4 - Our Ways In The World..........
An Ode To Textbook Poets
See All Poems by George Krokos
POET'S NOTES ABOUT THE POEM
A poem about two people talking on Reality
COMMENTS OF THE POEM
See All Comments
Next Poem
595 / 616
Previous Poem