The Cross, An Easter 'shape' Poem

Praise Him!
Praise Him! -
Hosanna,
the King
is here!
-
Hosanna!
He is
the One.
-
Come now, join us and praise Him! He brings hope. He brings freedom.
He has come to give us victory over our oppressors. Praise Him today.
Shout with your voices, "Hosanna! " Make an entrance; clear the way.
He's entering in and riding on a donkey. He sits upon him lowly, but He shall soon sit upon the throne of David's kingdom. "Praise Him! " I say.
-
"Crucify him! "
"Crucify Him?
But why? Tell
me, what evil
has He done? "
-
"He is only an
imposter. So,
crucify him.
For we know
he cannot be
the One. He's
just a phony.
He lied. He has
dashed all our
hope. He made
himself out to
be God, or his
Son. But he is
not. He cannot
be the One. So,
come join with
us, cry loud, lift
up your voice.
He deserves to
Die—die, I say!
Make the cross
the final choice,
for he should be
crucified today!
-
Crucify him!
Crucify him! 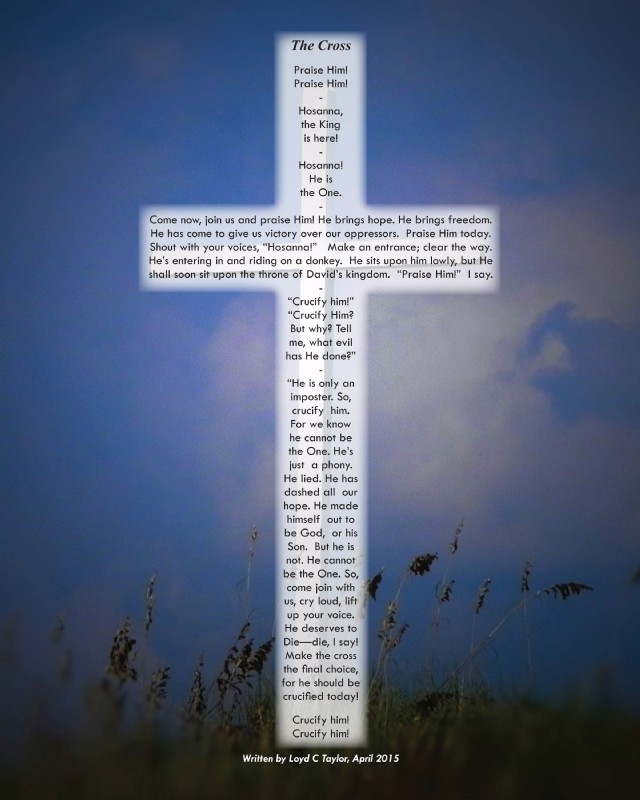 Loyd C Taylor Sr
Thursday, April 9, 2015
Report this poem
Topic(s) of this poem: christ,cross,easter,resurrection
POET'S NOTES ABOUT THE POEM
The above poem is meant to be in the shape of a cross. We are limited in what can be done with special effects here, so the above shape is the best I can do. Hopefully, you can make out the cross.


Author's notes:
The Process: The picture was shot with my Nikon Cool Pix P100
Using a variety of programs including Infanview, Fotor, Paint for a few, I was able to create and produce the white cross as you see it in the background of the pisture. The original picture of the cross was shot in Carolina Beach, NC. Then a good friend, "Trish" was able to assist me in encasing the poem into the white cross.

The final product was to be a 'Shape' poem, the shape of a cross. This, in light of the Easter celebration. Special thanks for help from some good friends, "Lois Funk, Rama Divi and Trish Binkley.

The Aim: I simply wanted to create a poem which tells the story of the change of heart of the people when they went from honor to horror.

The Message: We read the Easter message in several places in the Bible, here is one place for you to read.

The Trial and decision to crucify Christ
Mark 15: 1-15 KJV And straightway in the morning the chief priests held a consultation with the elders and scribes and the whole council, and bound Jesus, and carried him away, and delivered him to Pilate. (2) And Pilate asked him, Art thou the King of the Jews? And he answering said unto him, Thou sayest it. (3) And the chief priests accused him of many things: but he answered nothing. (4) And Pilate asked him again, saying, Answerest thou nothing? behold how many things they witness against thee. (5) But Jesus yet answered nothing; so that Pilate marvelled. (6) Now at that feast he released unto them one prisoner, whomsoever they desired. (7) And there was one named Barabbas, which lay bound with them that had made insurrection with him, who had committed murder in the insurrection. (8) And the multitude crying aloud began to desire him to do as he had ever done unto them. (9) But Pilate answered them, saying, Will ye that I release unto you the King of the Jews? (10) For he knew that the chief priests had delivered him for envy. (11) But the chief priests moved the people, that he should rather release Barabbas unto them. (12) And Pilate answered and said again unto them, What will ye then that I shall do unto him whom ye call the King of the Jews? (13) And they cried out again, Crucify him. (14) Then Pilate said unto them, Why, what evil hath he done? And they cried out the more exceedingly, Crucify him. (15) And so Pilate, willing to content the people, released Barabbas unto them, and delivered Jesus, when he had scourged him, to be crucified.

I do wish to add, the crucifixion was not the last page in the life of Christ. No! He arose from the dead and this fact I completely and absolutely believe!

The Resurrection
Mark 16: 1-6 KJV And when the sabbath was past, Mary Magdalene, and Mary the mother of James, and Salome, had bought sweet spices, that they might come and anoint him. (2) And very early in the morning the first day of the week, they came unto the sepulchre at the rising of the sun. (3) And they said among themselves, Who shall roll us away the stone from the door of the sepulchre? (4) And when they looked, they saw that the stone was rolled away: for it was very great. (5) And entering into the sepulchre, they saw a young man sitting on the right side, clothed in a long white garment; and they were affrighted. (6) And he saith unto them, Be not affrighted: Ye seek Jesus of Nazareth, which was crucified: he is risen; he is not here: behold the place where they laid him.

I know my poem is about the Triumphal Entry and the Crucifixion, but to me, it represents what took place to bring about the significance of the cross.

The message of Easter, or Resurrection Sunday is about the resurrection of Jesus from the dead!

I hope you enjoy the picture and poem. It is my prayer that is will not only be something attractive, but more so provide a powerful message of the true meaning of Easter.
I hope you do believe in the resurrection as well, if you don't I pray that you would give it serious thought. Let me know if I can offer any guidance.

I hope you know the true message of Easter.

Loyd
READ THIS POEM IN OTHER LANGUAGES