Acquainted With The Night Robert Frost

I have been one acquainted with the night.
I have walked out in rain - and back in rain.
I have outwalked the furthest city light.
...

Read Poem
A Brook In The City Robert Frost

The farmhouse lingers, though averse to square
With the new city street it has to wear
A number in. But what about the brook
That held the house as in an elbow-crook?
...

Read Poem
Before The Throne Of Beauty Xxvi Kahlil Gibran

One heavy day I ran away from the grim face of society and the dizzying clamor of the city and directed my weary step to the spacious alley. I pursued the beckoning course of the rivulet and the musical sounds of the birds until I reached a lonely spot where the flowing branches of the trees prevented the sun from the touching the earth.

I stood there, and it was entertaining to my soul - my thirsty soul who had seen naught but the mirage of life instead of its sweetness.
...

Then one of the judges of the city stood forth and said, "Speak to us of Crime and Punishment."

And he answered saying:
...

And one of the elders of the city said, "Speak to us of Good and Evil."

After that hot gospeller has levelled all but the churched sky,
I wrote the tale by tallow of a city's death by fire;
Under a candle's eye, that smoked in tears, I
Wanted to tell, in more than wax, of faiths that were snapped like wire.
...

I saw a city filled with lust and shame,
Where men, like wolves, slunk through the grim half-light;
And sudden, in the midst of it, there came
One who spoke boldly for the cause of Right.
...


They lie, the men who tell us in a loud decisive tone
That want is here a stranger, and that misery's unknown;
For where the nearest suburb and the city proper meet
...

Read Poem
A Poem For Myself Etheridge Knight

(or Blues for a Mississippi Black Boy)

I was born in Mississippi;
I walked barefooted thru the mud.
...

The trees along this city street,
Save for the traffic and the trains,
Would make a sound as thin and sweet
As trees in country lanes.
...

Being apart and lonely is like rain.
It climbs toward evening from the ocean plains;
from flat places, rolling and remote, it climbs
to heaven, which is its old abode.
...

Only one cell in the frozen hive of night
is lit, or so it seems to us:
this Vietnamese café, with its oily light,
its odors whose colorful shapes are like flowers.
...

Curtains forcing their will
against the wind,
children sleep,
exchanging dreams with
...

With the freedom of an outlaw,
bees to whom earth
is but a benevolent garden
and what matters
...

Skin remembers how long the years grow
when skin is not touched, a gray tunnel
of singleness, feather lost from the tail
of a bird, swirling onto a step,
...

I loved you in the morning, our kisses deep and warm,
your hair upon the pillow like a sleepy golden storm,
yes, many loved before us, I know that we are not new,
in city and in forest they smiled like me and you,
...

Kosti is a city belonging to the most outstanding loveliness White Nile state of Sudan, located around 380 meters away of swinging our of light through eyes is full of peace and calm mingle, like a moment all thought dies.

It is located in the opposite direction of the state capital Rabak on the bank of Gorgeous the River White Nile and these cities are linked by a bridge; no waist to place my arms around, no lips for me to rub; No hair to lose my fingers in, nor ear to whisper sweet words of love and belle.
...

My awesome city is the place where we find ourselves breath out happily and feeling peace and happiness that scutters us get back feeling the tranquility of its surroundings.

There is no place like Omdurman can make us feel tremendous peace; swaying in quiet garden where roses bloom upon hill tree in a field.
...

This is a poetic eulogy to the outlaw Bonnie Parker.
Including here all the known poems associated with Bonnie,
...

City of Faces
Everywhere has faces and so do you
The point is not to eliminate the other point of view
We are never just one thing; neither is this place
...

No sound no movement no sign of life in it now,
Alas, my bustling city is lying today as a dead python being shattered.

David Dinkins, professor at Columbia University.
African American first mayor of New York City.
variety of lifestyles and political life within the city.
In the assembly a politician from a Marine and lawyer of the city.
...

This is the CITY
It is a City of MASJID
It was a safe CITY:
This was the city of sweet breeze at dawn
...

This is Lagos, a city that never sleeps. The epicentre of commerce and industry.
A city whose heart beats boisterously and vivaciously.
She opens her doors to all and sundry.
A city where the sun never goes to bed. The Moon a companion to night crawlers.
...

(for Anders who wants to know)
I live on a wedge of land
reclaimed from a tired ocean
somewhere at the edge of the universe.

Greetings from this city
of L'Oreal sunsets
and diesel afternoons,
deciduous with concrete,
botoxed with vanity.

City wracked by hope and bulimia.
City uncontained
by movie screen and epigram.
City condemned to unspool
in an eternal hysteria
of lurid nylon dream.

City where you can drop off
a swollen local
and never be noticed.
City where you're a part
of every imli-soaked bhelpuri.

City of the Mahalaxmi beggar
peering up through
a gorse-bush of splayed limbs.

City suspended between
flesh
and mortar
and foam leather
and delirium

where it is perfectly historical
to be looking out
on a sooty handkerchief of ocean,
searching for God.
...

'Tis the tolling bell's low dirges,
Borne aloft on every breeze,
Rolling on in solemn surges
Over mountains, plains, and seas,
Tolling, tolling, softly tolling
While the short, swift years have fled,
From the city of the living
To the city of the dead.

From old ocean's rock-ribbed islands,
From Sahara's parching floors,
From fair Scotia's health-clad highlands,
Or from Iceland's frozen shores,
Rolls that march in solemn measure
While the hosts of earth are led
From the city of the living
To the city of the dead.

Over Egypt's tombs and temples,
Over ashen Indian braves,
Over England's ivied abbeys,
Over old Peruvian graves,
Rolls the dirge that sadly follows
Each unto his silent bed
From the city of the living
To the city of the dead.

Not a day but hears its sadness
Not a home but knows its sound,
Not a town aglow with gladness
With no graveyard's sacred ground,
Life enwrapt with brightest promise,
Hush! the last decree is said
From the city of the living
To the city of the dead.

Traveling to that silent city,
One by one to be forgot,
Would we not lost heart and courage,
Hope and purpose- were it not
For our Father's loving mercy,
Like the golden sunshine shed
On the city of the living
And the city of the dead?
... 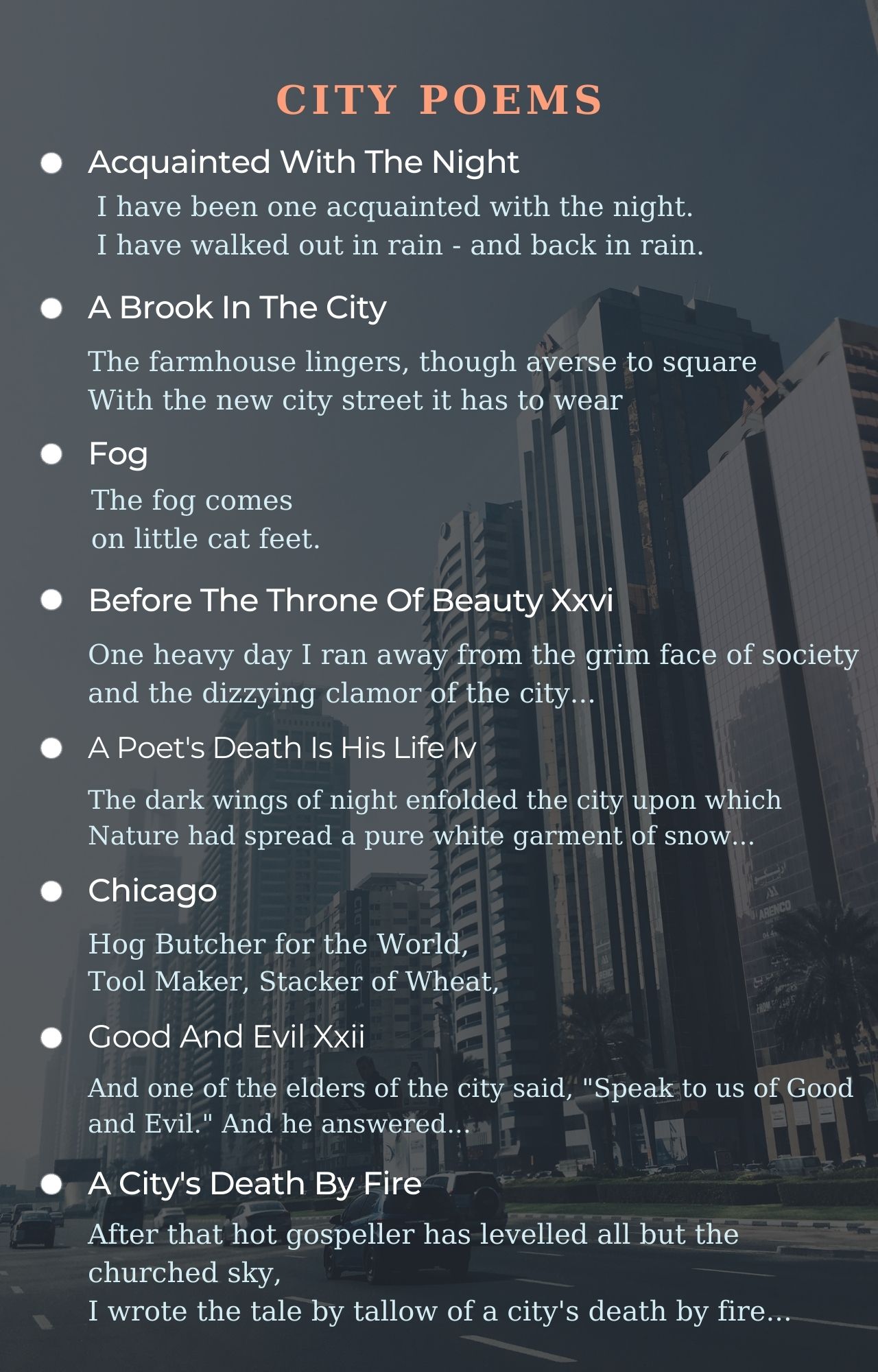