An Empty Pack Of Cigarettes And A Bottle Of Wine

He always smelled of cigarettes and wine
in his faded blue jeans and cowboy boots
whose smile was as bright as the day's decline
or a black hellebore plucked by its roots.
The buttons hung loose from his army coat.
His dark hair was always in disarray,
and a silver cross would glint at his throat
whenever the sunlight would shine his way.

He flicked the Bic in the palm of his hand
to hammer the coffin nail on his lip.
His laughter was as dry as desert sand.
The back of his mind was an acid trip.
He was a ghost that came back from the edge
who saw his brothers in arms as they fell.
He lived to tell it but became a wedge,
a broken hero of heaven in hell.

The bloody footprints that lived in his skin
followed him everywhere day and night;
and screams, like mortars, exploded within
like a rain of bullets to kill the light.
He walked in darkness with nightmares to bind,
bound to the past and its vaunted glory.
With blood in his veins and blood left behind,
there are deep scars and wounds to his story.

He drowned the past in the back of his throat;
but it was short-lived and temporary,
for wine unwinds and the memories float.
It was a burden too great to carry.
With a tattooed eagle and karmic wheel,
he etched forever the weary way tread,
undreamed his dreams, turned his feelings to steel,
and lay at night with the ghosts of the dead.

Most never noticed the rain in his eyes
for they were afraid of what they might see
for shadows do rise and truth never lies.
Paper-thin walls fold eventually.
He walked among us; yet, he walked alone.
He drove a black '66 Impala.
Aimless and wayward, a feather or stone,
he sought the peace of ancient Shambhala.1

One night, he awoke to a battle cry,
to the sounds of dying and Phantom jets.
In a cold sweat shivered, whispered a sigh,
then he reached for his pack of cigarettes.
The pack was empty, a quarter past nine.
He got up to dress to go buy some more.
He carried with him a bottle of wine,
planned to drink it on the way to the store.

He started the engine, backed down the drive,
took a swig, and he was well on his way.
The wind in his hair made him feel alive.
Another swig chased the demons away.
He rounded the bend and blew out a tire.
He lost control as he slammed on the brakes,
hit a pole, and then the Chevy caught fire.
This was the last of his many mistakes.

The police arrived with a siren's scream.
He had been thrown, in a terrible state.
He floated downstream, bloodstream to redeem;
and the last words that he heard were "… too late."
He always smelled of cigarettes and wine.
The shadow of night stretches over hill.
His ashes were scattered over the vine,
and his spirit is there lingering still. 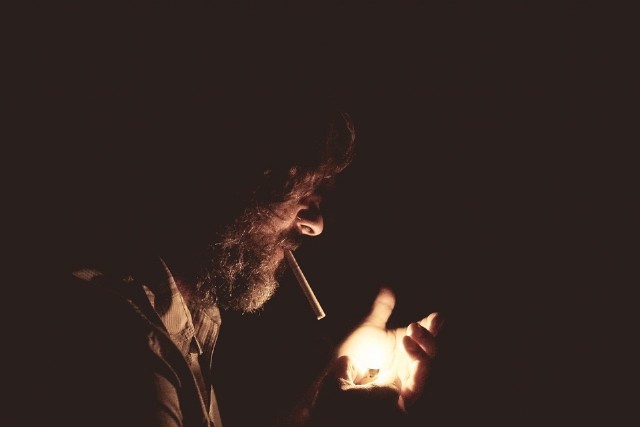