Swans are natural works of art
in form and feature full of grace,
famous for mating from the heart
in lifelong marriage bond embrace.

In legend the swan typifies
serenity, beauty, and peace,
plus purity may symbolize
or true metamorphic release.

A portraiture sensational,
of infant stars in nursery,
for poet inspirational,
has hidden clues precursory

of their growth sidereally
with massive ones making the glow
from cloud heat, materially
streaming off into the tableau.

Thirty-five youthful stars bigger
by twenty to thirty times each
hotter by six than Sun's vigor
give the brilliant stellar outreach.

It lies within Milky Way's core
in Archer, Sagittarius,
with hues of aesthetic rapport
and vivid facets various.

Across the canvas of the Swan
or Nebula M seventeen
is limned that lovely paragon
in winsome watercolor scene.

where cosmic cloud's center is shown
amid ferment of newborn stars
in colorful gaseous zone
of stellar cradle reservoirs.

This nebula's beauteous girth
will finally be undermined,
as radiation from star birth
leaves just a small cluster behind.

The region of the depiction,
five thousand five hundred light-years
afar from the jurisdiction
over our planetary spheres

of Sun the premier provider,
is three thousand five hundred times
than the Solar System wider—
meanwhile we posit paradigms

Thus, Swan Nebula will ‘swan song'
sing, as go swan tales old and new,
when death whittles down its lifelong
fling, in an ultimate adieu.

There was an ancient Greek belief
that swans intone a tuneful phrase
in dying moment of their grief
having been silent all their days.

As an aside about this lore,
the familiar swan labeled ‘mute'
has not been known to song outpour
even when death is in pursuit,

albeit the type called ‘whooper'
has been noted when lungs collapse
to issue in dying stupor
a drawn-out string of tones, perhaps

the basis for the ‘swan song' myth,
plus ‘tundra' and ‘trumpeter' breeds
which when wounded utter therewith
some plaintive sounds as life recedes.

Aesop's fable of ‘Swan and Goose'
says that the stately bird so prized
once caught by mistake was cut loose
when its warble was recognized.

Composed four centuries ago
a madrigal ‘Silver Swan' states
in lyrical verse apropos,
which yet again the goose berates,

‘The silver Swan had not a Note
while living, but when Death drew nigh, '
to writer's words rephrase, ‘her throat
unlocked a melodied goodbye.'

‘Farewell, ' said she, ‘all joys, come Death, '
in last lament, ‘come close mine eyes!
More Geese than Swans have life and breath
in age like ours, more Fools than Wise.'

For us this still will resonate
as a fitting allegory
which hints at melancholic fate
owing to human vainglory.

Yet despondency may upend
with the haunting harmonic strains
that to musical heights ascend,
so hope for humanity reigns. 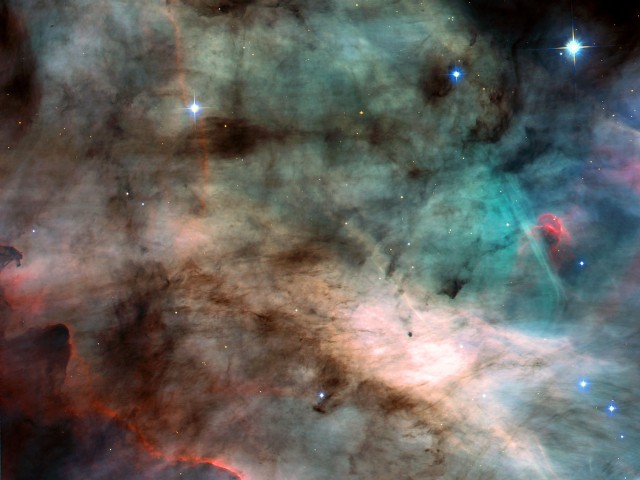 Harley White
Wednesday, June 3, 2020
Topic(s) of this poem: astronomy ,beauty,despondent,earth,hope,human condition,music,nebula,song,sun
poem poems farewell inspirational
Download image of this poem.
Report this poem
POET'S NOTES ABOUT THE POEM
Inspiration was derived from the following sources, among others…

Orlando Gibbons: The Silver Swan (YouTube)~ a madrigal by Orlando Gibbons (1583-1625)audio with lyrics, sung by the Tallis Scholars directed by Peter Phillips…

Words of madrigal, ‘The Silver Swan', by Orlando Gibbons:

The silver Swan, who, living, had no Note,
when Death approached, unlocked her silent throat.
Leaning her breast against the reedy shore,
thus sang her first and last, and sang no more:
"Farewell, all joys! O Death, come close mine eyes!
More Geese than Swans now live, more Fools than Wise."

Image explanation ~ This image shows the center of the Swan Nebula, or M 17, a hotbed of newly born stars wrapped in colorful blankets of glowing gas and cradled in an enormous cold, dark hydrogen cloud. This stunning picture was taken by the newly installed Advanced Camera for Surveys (ACS)aboard the NASA/ESA Hubble Space Telescope.

Addendum for classical music lovers: Orlando Gibbons (1583-1625)was the leading composer in early 17th century England and a pivotal transitional figure from the end of the Renaissance to the beginning of the Baroque era… Canadian pianist Glenn Gould praised him highly and compared his music, especially for the keyboard, to the likes of Beethoven and Webern. Gibbons paved the way for a future generation of English composers… and was not merely a significant figure in music's past but a composer who can still speak directly to the present.

Note: I was so taken with the madrigal ‘The Silver Swan', by Orlando Gibbons, first published in 1612, that I listened to it at least once a day while composing the poem. Then I delved deeper into Gibbons and discovered that he was a favorite of Glenn Gould's, who is a favorite of mine, which led me to keyboard music of Gibbons, indeed quite a discovery for me. At any rate, I strongly recommend listening to the madrigal, since it greatly influenced my poem. ~ HW
COMMENTS OF THE POEM
Michael Walkerjohn 25 July 2020

Aloha Harley! IAM still getting the feel of the latest change herein... and to the point... IAM enraptured by all of the pertinent research that you do and provide in your notes... expressing within your deeper leans... I will continue to read thoroughly your delightful submitting'... All of the best from this life, to you, and to all of our relations... Michaelw1two

I am also getting to know the new format. For instance, it took me a long time to discover how to reply to comments. I am delighted that you enjoy the research info I provide with my poems! And it is wonderful that you will continue to delve into more of them! Thank you so much!