If Keats could have seen through Hubble's eyes
when the sonnet ‘Bright Star' he wrote,
meaning its telescope-imaged skies
with those stellar tableaux afloat,

would he have noted ‘aloft it hung'
‘steadfast' all night in ‘splendor lone',
that poet who died, alas, too young
yet over time whose fame has grown?

Of course such matters can just be guessed
or mused upon in dreamlike lapse
regarding this work to star addressed,
which may Polaris be perhaps.

At any rate, the depiction shown
of NGC One Eight Nine Eight,
viewed in Large Magellanic Cloud zone,
looks like dazzling jewels ornate.

The astral globular cluster sphere,
a stelliferous formation,
lies in southern skies, far off from here,
in Dorado constellation.

Described as ‘celestial fairy lights',
this collection gravity bound
was claimed as one of John Herschel's sights
when in eighteen thirty-four found.

A spectrum wide from the infrared
to the ultraviolet range
was captured for the aggregate spread
to study how star stages change.

For wavelengths different to display
two cameras distinct were used,
and varied tints four filters portray,
all finally together fused.

That glittering cosmic ball contains
more stars than we can comprehend,
each one encompassing its domains,
seen in multi-hued image blend.

How many myriad realms might dwell
within the sidereal crowd,
where creatures ‘out of this world', as well
are poetically endowed?

Would humans be able to perceive
the art of a parallel Keats
however such being could achieve
commensurate lyrical feats?

Returning from these celestial heights
far beyond our firmament's dome
to this planet, there are countless plights
disquieting, closer to home.

Unbridled greed runs rampant on Earth
and is taking a horrid toll.
Deluded from grasping life's true worth,
Man mistakes a part for the whole.

By nature bountifully bestowed,
albeit diamonds in the rough,
we fail to seek an enlightened road
but choose instead to strut our stuff.

Perchance in the heavens' vast expanse
unfathomed in immensity,
a pale blue dot round lone star may dance
where mortals have more sense than we. 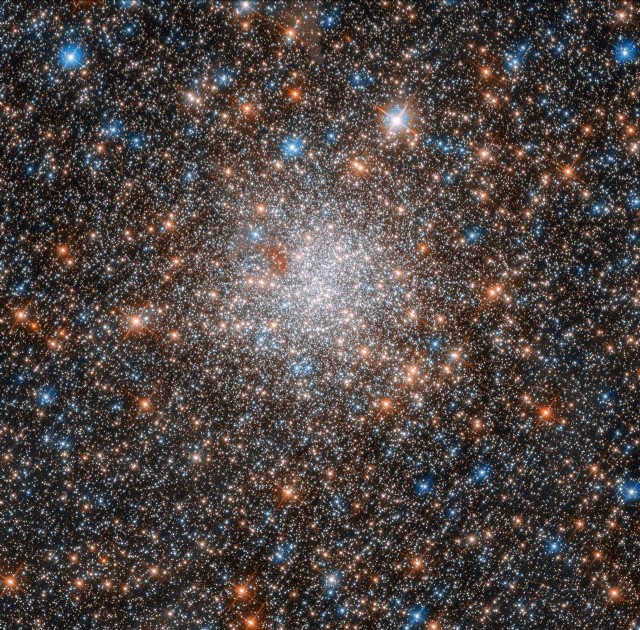 Bright star, would I were steadfast as thou art ~ sonnet by John Keats…

Image explanation: This huge ball of stars, NGC 1898, is called a globular cluster and resides in the central bar of the Large Magellanic Cloud (LMC) -a satellite galaxy of our large Milky Way Galaxy. The featured multi-colored image includes light from the infrared to the ultraviolet and was taken to help determine if the stars of NGC 1898 all formed at the same time, or at different times. There are increasing indications that most globular clusters formed stars in stages, and that, in particular, stars from NGC 1898 formed shortly after ancient encounters with the Small Magellanic Cloud (SMC) and our Milky Way Galaxy.

Well now, how many myriad realms might dwell...where creatures out of this world, , are poetically endowed? ..and perceiving the art of a parallel Keats? ...this poem is more than a dream within a dream as another poet wrote, it is imagination within imagination and that is what makes you so special of a poet to me, and with your signature style you force us to look at our lot in life that we here on another blue dot have squandered to our detriment, what a great poem! ! !

How marvelous are your careful perusals of my poems! I am very fortunate to have you as a reader of my works. I truly appreciate your confirmation that I am conveying what I wish to express Thank you so much!

A sparkling piece of diamond... beauty prevails throughout.

I love this stanza! Would humans be able to perceive the art of a parallel Keats however such being could achieve commensurate lyrical feats? Would we all not love to read a cosmically parallel Keats.

Perchance in the heavens' vast expanse unfathomed in immensity, a pale blue dot round lone star may dance where mortals have more sense than we...... impressive inscription on heaven. A beautiful poem. Thanks and congratulations for being chosen this poem as the member poem of the poem of the day.

Ah, you have quoted the last stanza. I'm pleased that it impressed you. Thank you very much for sharing your reaction to my poem!

It is true that I try to respond to comments and it is nice that you noticed. Thank you. For one thing, I appreciate it when someone takes the time to read and respond to my works. And also the feedback helps me know if I have conveyed my poetic intent to the reader.

Science and poetry are sisters born of the same mother. Loved your poem, thanks for the beautiful picture. The last stanza is worth reading a hundred times.. Heartiest congratulations on your poem's selection as the 'Member Poem of the Day'!

I agree that science and poetry go together and I'm glad you enjoyed the way I combined them in the poem. The fabulous images from Hubble Telescope often inspire my poems. I'm pleased that you like the last stanza so much! Thank you for your marvelous remarks!