I Am Proud Of Being A Bengalee (1)

I'm proud of being a Bengalee, proud of our Bengal
The Bengalees are peaceful, loving, gentle, amicable
Energetic, brave, stern, in need, they take up the gun
Netaji Subhas Bose, the first Indian to bring freedom
Khudiram Bose sacrificed his life when he was a teen
He was hanged at the very young age of only eighteen
Binay-Badal-Dinesh shot dead General N.S. Simpson
Very cruel the British Inspector General of the Prison
Matangini Hazra was also a famous freedom fighter
Came on to fight British Empire and became a martyr
Bina Das, despite heralding from upper-middle-class
A student of top Calcutta's missionary School campus
Dared to shoot the Bengal Governor Stanley Jackson
In the famous Calcutta University Hall of Convocation
....to be contd. 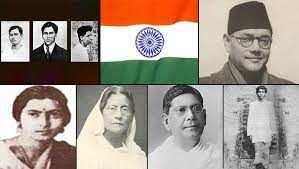 umaprosad das
Saturday, March 27, 2021
Download image of this poem.
Report this poem
READ THIS POEM IN OTHER LANGUAGES