Down on the river bluffs of South Dakota,
Where Shoshone women capitulate to peasantry,
One awakes understandingly adhesive to the empathy of tribal nomads,
defiant of inculcate apostasy.

A thunderbird churns a brood of clouds,
burdened to quell a swelter harvest from wilt,
phratry proffer Rain-dance to appease pagan gods,
while children frolic around in warbonnets.

For all men that lay vestige eyes on these crackled badlands,
gallantly wooed for its lush prairies,
And damned for its coarse brittle stone,
I say to them our suffrage cause has not faded obscurant.

For winter spills its frost on our forlorn people,
with laborious tears that fuel effervescence below gelid currents,
a haven of animistic faith sarcenet at heart,
where blood runs thick as buffalo herds of yesteryear.

it is the thought of your silhouette smiling in the distant sun,
bereaved of a mountain lion's harm,
that dotes a grimoire of folk remedies,
which spirals forward consciously to a gentrified colonialism.

Spring is here hedged of dandelions and wheatgrass,
dragonflies tether around its budding flowers,
a dalliance of furtive culture embedded in local flora,
Ignorant of race and color.

Of man that embarks in haste towards an amorous noose,
let him remark of his macadamized spirit,
does justice serve prevalence of character.

A subtle touch of penumbra calls my dormant soul confined to your arms,
To squeeze ageless thoughts of darkness,
and spill redundancy of love over the open plains,
Where totem poles bask in the levied sun. 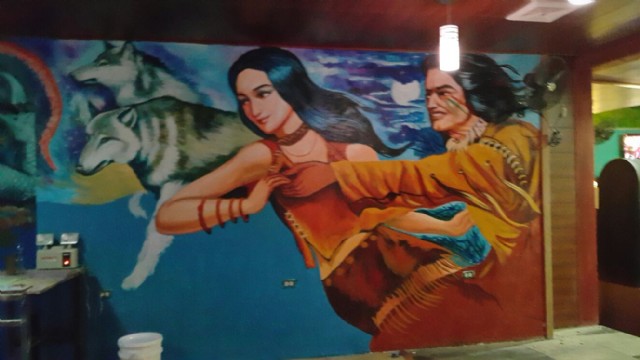 Elliott Rosenberg
Sunday, January 21, 2018
Topic(s) of this poem: children,colonialism,despair,indian,justice,soul,woman,wood
poem poems culture justice
Download image of this poem.
Report this poem
POET'S NOTES ABOUT THE POEM
This poem is dedicated to the proud Indians of South Dakota that have endured hardship and tenuity at the hands of settlers who stripped them of communal emancipation. So I dedicate this poem to a ragged dog called Shilo and a stray cat named Laila who are continuously bullied by Oliver the midnight transient. And so I wrote this poem January 6,2017 spiritually connected with Kristen who embraces a lonely poet.
COMMENTS OF THE POEM
Gajanan Mishra 21 January 2018

soul confined to arms, good one