Do I exist as something seen,
This hook and eye of glance and light
- working down the lines of sight -

that now I flash but then allow
to guide me through the mirror so
that I may glimpse the self that sees.

not once because what now divides
later conjoins and reunites
every time the glance invites.

It offers then it borrows back.
It breaks up the continuous flow
between the likeness and the fact

of face itself, the visual field
busted open: face erased.
Before my very eyes, shame-faced,

so vision itself seeks escape.
Between two pairs of eyes the thread
remains suspended in ‘instead'.

It fills my eyes in one brief glance.
It flies home, breaks on broken glass.
Another woman, bold as brass.

No seeing it. It's language only.
Multiple pasts that gather in me,
reflections on which I reflected

but do not constitute a presence.
And yet the thing won't let me be
but drags me back with brutal force.

I'm shackled to my image, held
and harnessed, braked and fully bonded,
obliged into an equipoise

stretched across the frozen sheet
of the mirror as by choice,
like rowers pulling on two oars,

dipping the oars into the fleet
current then dipping out again,
dipping and raising, dipping deep,

while it takes then renders back
in to and fro: remove, repeat,
urged now to part, now to remain

a siren that's forever calling,
that grabs the eye and fiercely holds it
breaking the organ that beholds it.

The spell is broken like a trick.
Mere spectacle. A speck, a glance
dependent on the merest chance. 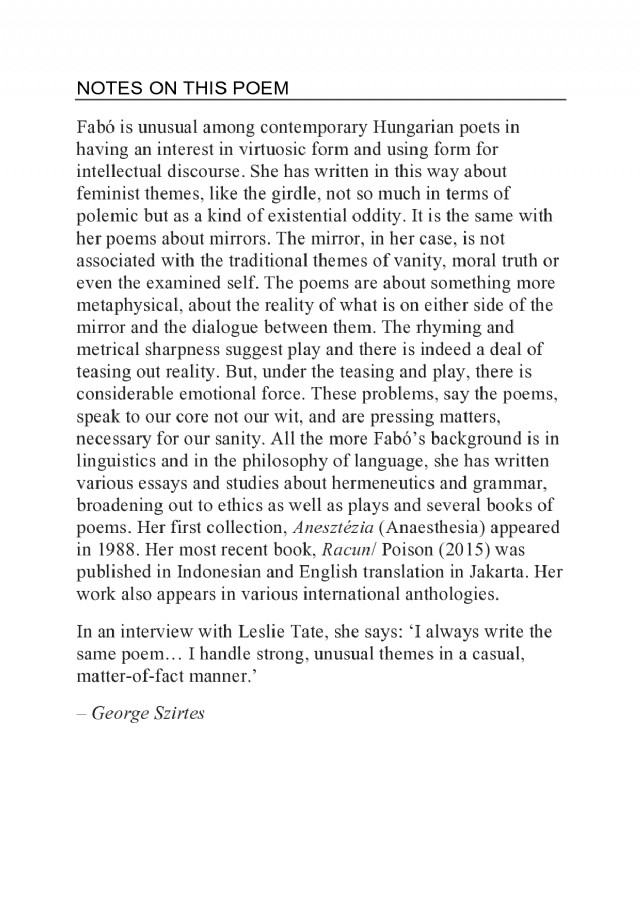 A wonderful poem that fully reflects our thoughts each time we see our reflection? .....well written Kinga

Reflection of emotions and doubts as passing through the ripples of time. Well written.10+.

Congratulation for being selected as poem of the day.

[FOR USA]Start working from home! Great work for-Ever, Stay at Home Moms OR anyone needs an extra income. Get started. You only need a computer and a reliable computer connection so don't get late try…… Worksful.com

[FOR USA]Start working from home! Great work for-Ever, Stay at Home Moms OR anyone needs an extra income. Get started. You only need a computer and a reliable computer connection so don't get late try…… Worksful.com

For ever calling, for ever living, good write.

An excellent poem of reflection. Congratulations on poem of the day Kings.

Excellent write, congrats on your poem being chosen... thanks and happy holidays! Peace.

I would like to translate this poem
Poems By Kinga Fabo
Blow Wind, Blow
Cancer
Covering
Mirror Image
I'm Not A City
See All Poems by Kinga Fabo
Next Poem
20 / 30
Previous Poem