Shieka was my second pup who was a lot of fun.
He looked like a miniature Ta-Shieka.
who was half German Shepherd and Chow,
Shieka was born in the state with a lot of cows.
Yes, he was born in Wisconsin.
He was half Pomeranian.
His mother’s name was named Sweet Carolyne,
she had Pomeranian, in her blood line.
His father’s name was Dream Boat for Shieka
was born on the St. Croix river,
I got Shieka him out of Wisconsin so he wouldn’t shiver.
His dad was of the Sheltie breed,
Shieka was very independent and did is own thing.
He would pick up a bone, walk,
then put it down then lift his leg do his thing,
He was shipped to Minnesota and there he lived.
I bought Shieka at a pet store and took him to the sunshine state,
He was well behaved on the plane, he was really great.
He stayed with me, until one sad day,
someone came and took him away.
He was out chasing cats in the front lawn,
I didn’t believe it, I thought how could he be gone?
I know wherever he is, he is running around a little tree.
He is having fun, amusing everyone. 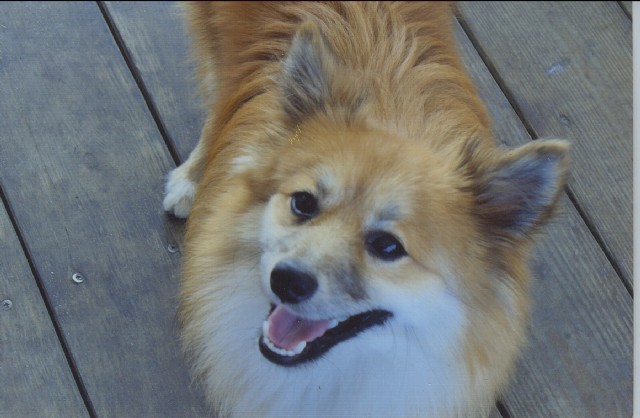 Topic(s) of this poem: love