Sweet Peace, where dost thou dwell? I humbly crave,
Let me once know.
I sought thee in a secret cave,
And ask'd, if Peace were there,
A hollow wind did seem to answer, No:
Go seek elsewhere.

I did; and going did a rainbow note:
Surely, thought I,
This is the lace of Peace's coat:
I will search out the matter.
But while I looked the clouds immediately
Did break and scatter.

Then went I to a garden and did spy
A gallant flower,
The crown-imperial: Sure, said I,
Peace at the root must dwell.
But when I digged, I saw a worm devour
What showed so well.

At length I met a rev'rend good old man;
Whom when for Peace

I did demand, he thus began:
There was a Prince of old
At Salem dwelt, who lived with good increase
Of flock and fold.

He sweetly lived; yet sweetness did not save
His life from foes.
But after death out of his grave
There sprang twelve stalks of wheat;
Which many wond'ring at, got some of those
To plant and set.

It prospered strangely, and did soon disperse
Through all the earth:
For they that taste it do rehearse
That virtue lies therein;
A secret virtue, bringing peace and mirth
By flight of sin.

Take of this grain, which in my garden grows,
And grows for you;
Make bread of it: and that repose
And peace, which ev'ry where
With so much earnestness you do pursue,
Is only there. 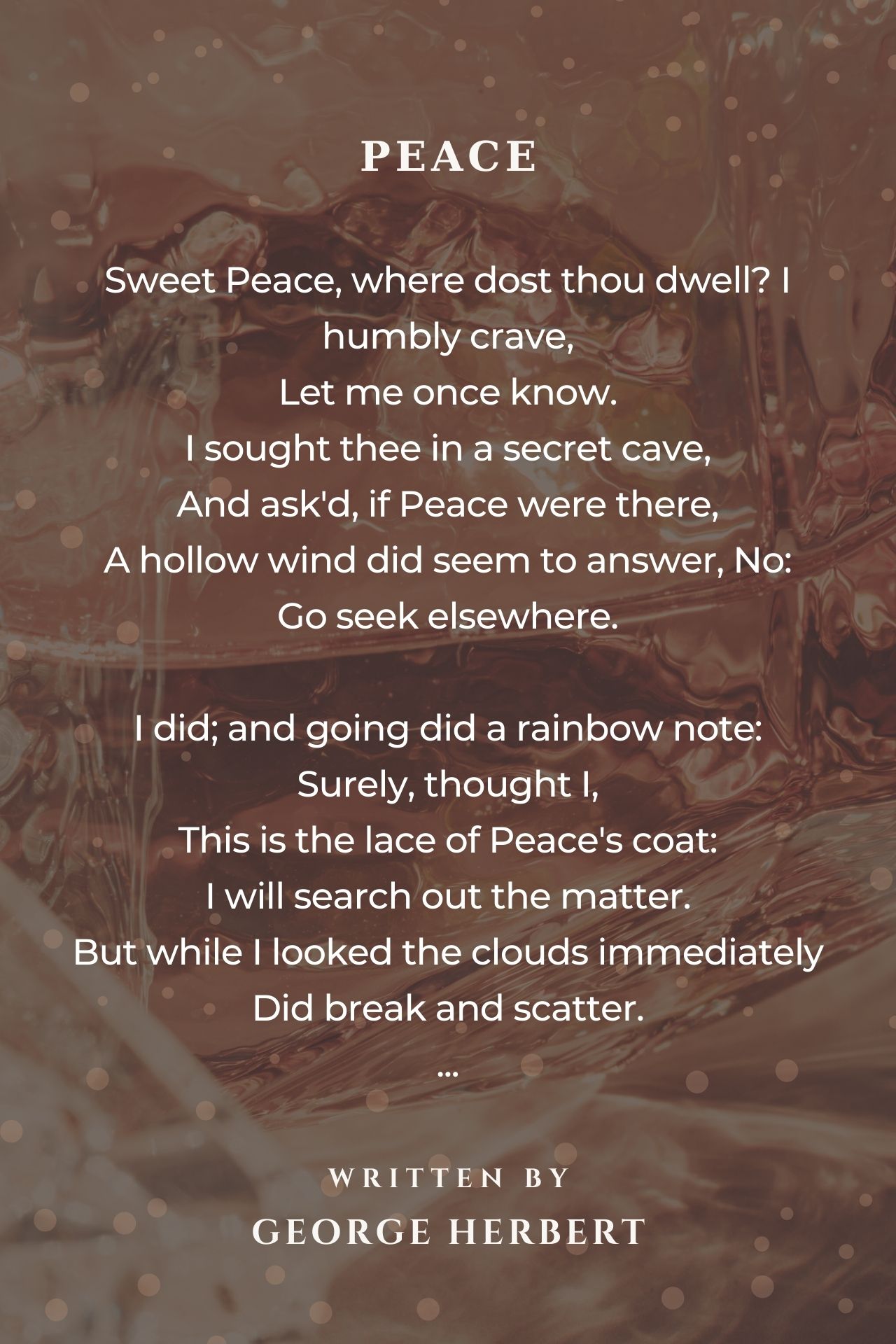 Great write. This id the best poem I ever read on PEACE. Its so simple and easy to relate with. True prace is not in things but the CREATOR through His Son, Jesus Christ

wow, amazing art, there is a deep meaning to it, simple, sweet narrative, it has been linked to become a beautiful but emotional story..bravo!

So...to make the seeker find peace, a reverend tells a story about a peaceful man who dies at the hand of his foes...then wheat springs up from his grave and soon people were making bread from the grains...not feeling it!

this is talking about a man who died and new life sprang from him to give peace to the world... also it takes place in Salem, a holy city. Am i the only one who realized he's saying you can only find peace in God?

Well, that made me chuckle. And I think it's quite perceptive. The kindly, sweet prince cannot generate peace in his realm as he lives. A sovereign who profits well in life with no mention of how his subjects fared. Only somehow we must believe his virtue contributed to something good that was widely shared after his death. Yeah, I'm kinda not feeling it now either. Although I initially wanted to see the peaceable reward in working the land and in the honest fulfillment of a home-baked loaf of bread. But there's kind of a hole in the center of the argument.

only there in poetry, not prose

Lovely poem with a soothing narrative about peace in life. Thanks.

If you seek it diligently, you will find it (Peace.) It is not too likely that Mr. Herbert will read these comments, as he died of tuberculosis in 1633. He became one of England's finest metaphysical potes. His brother, Edward, became the father of English deism. George was commended by Sir Francis Bacon, and was also elected to Parliament. Many of his proverbs survive today: Whose house is of glass must not throw stones at another. Theeye is bigger than the belly. His bark is worse than his bite. Thank you, Poem Hunter, for featuring the work of this remarkable man!

This poem in its text form acts as a flight of stairs; my eyes go between each group of text, thus attraction for such a poem is greatly soothed on my end.

Peace is always hunted everywhere in the world..... Nice piece...