Poised above the Gates of Hell, surveying the monstrous pit of eternal damnation…
Yet…melancholic, rather than aghast, at the prospect laid before him.
Far from the Divine Comedy, he sits alone, in solitary, contemplative thought.
To a fresh contemporary eye, appears a modern, secular man..strong in mind and body taut.
Yet lonely and still as a statue...butarranged with a sense of movement..
His arm restingon his knee- an exaggerated pose.. but deceiving the mind to believe
at any moment… he could rise up and leave 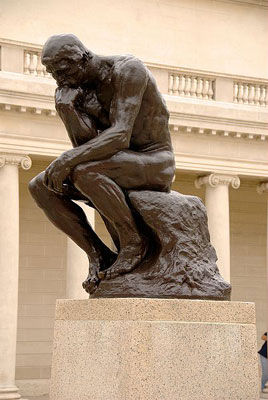 Lodigiana Poetess
Thursday, November 30, 2017
Download image of this poem.
Report this poem
Topic(s) of this poem: culture,lonely,think,thought
poem poems
POET'S NOTES ABOUT THE POEM
What exactly does that sculpture say? ? ? ?
READ THIS POEM IN OTHER LANGUAGES

Thank you so much Shaun..this was my first venture into Ekphrastic poetry so I am pleased that you enjoyed it and of course your comments are always so uplifting and positive.! Maybe I will try to find a little more inspiration somewhere to give this another try! Thanks again dear friend!

An arts believer would say that some classic artisans produce works simply to stir up debate and sow the seeds for a different line of thought after viewing. A great poem as always Lodgiana and always original and hopefully the great masters have read it and are smiling down on you. 10++ and added to my favs. Thank you again and I wish you well. Shaun. x..

Your profound and well found words for this great work of art, that concentrates in bronze, so much of human feeling and mental exercise certainly have given a remarkable context to the sculpture, After reading them we get other meanings, feelings and it becomes even more alive. Wonderful achievement!

Fortunately this was one piece that really fascinated me and made me want to see a backstory to the work...I am so pleased that you gained something from it..thanks as always Sandra for your insightful words that are so very welcome.Lodigiana x