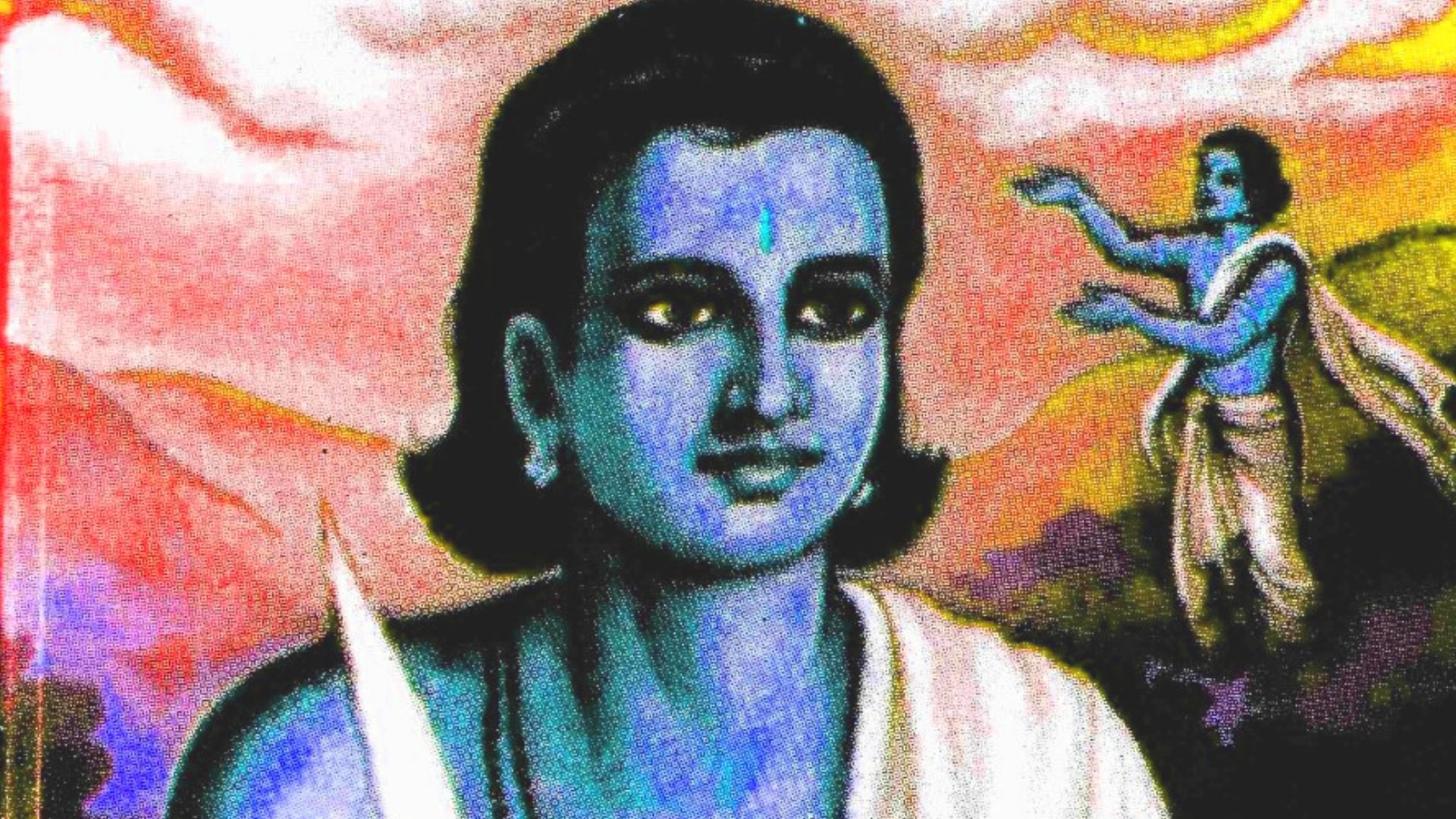 
The slender young woman who is there would be the premier creation by the
Creator in the sphere of women, with fine teeth, lips like a ripe bimba fruit, a
slim waist, eyes like a startled gazelle’s, a deep navel, a gait slow on account
of the weight of her hips, and who is somewhat bowed down by her breasts.

You should know that she whose words are few, my second life, is like a
solitary female cakravaka duck when I, her mate, am far away. While these
weary days are passing, I think the girl whose longing is deep has taken on an
altered appearance, like a lotus blighted by frost.

Surely the face of my beloved, her eyes swollen from violent weeping, the
colour of her lower lip changed by the heat of her sighs, resting upon her
hand, partially hidden by the hanging locks of her hair, bears the miserable
appearance of the moon with its brightness obscured when pursued by you.

She will come at once into your sight, either engaged in pouring oblations, or
drawing from memory my portrait, but grown thin on account of separation,
or asking the sweet-voiced sarika bird in its cage, ‘I hope you remember the
master, O elegant one, for you are his favourite’;

Or having placed a lute on a dirty cloth on her lap, friend, wanting to sing a
song whose words are contrived to contain my name, and somehow plucking
the strings wet with tears, again and again she forgets the melody, even
though she composed it herself;

Or engaged in counting the remaining months set from the day of our
separation until the end by placing flowers on the ground at the threshold, or
enjoying acts of union that are preserved in her mind. These generally are the
diversions of women when separated from their husbands.

During the day, when she has distractions, separation will not torment her so
much. I fear that your friend will have greater suffering at night without
distraction. You who carry my message, positioned above the palace roof-top,
see the good woman at midnight, lying on the ground, sleepless, and cheer her
thoroughly.

Grown thin with anxiety, lying on one side on a bed of separation, resembling
the body of the moon on the eastern horizon when only one sixteenth part
remains, shedding hot tears, passing that night, lengthened by separation,
which spent in desired enjoyments in company with me would have passed in
an instant.

Covering with eyelashes heavy with tears on account of her sorrow, her eyes
which were raised to face the rays of the moon, which were cool with nectar
and which entered by way of the lattice, fall again on account of her previous
love, like a bed of land-lotuses on an overcast day, neither open nor closed.

She whose sighs that trouble her bud-like lower lip will surely be scattering
the locks of her hair hanging at her cheek, dishevelled after a simple bath,
thinking how enjoyment with me might arise even if only in a dream, yearning
for sleep, the opportunity for which is prevented by the affliction of tears;

She who is repeatedly pushing from the curve of her cheek with her hand
whose nails are unkempt, the single braid, plaited by me, stripped of its
garland, on the first day of our separation, which will be loosened by me when
I am free from sorrow at the expiry of the curse, and which is rough to the
touch, stiff, and hard.

That frail woman, supporting her tender body which he has laid repeatedly in
great suffering on a couch, will certainly cause even you to shed tears in the
form of fresh rain. Generally all tender-hearted beaing have a compassionate
disposition.

I know that the mind of your friend is filled with accumulated love for me. On
account of that I imagine her condition thus at our first separation. Even the
thought of my good fortune does not make me feel like talking. All that I have
said, brother, will be before your eyes before long.

I think of the eyes of that deer-eyed one, the sideways movements of which
are concealed by her hair, which are devoid of the glistening of collyrium,
which have forgotten the play of their eyebrows on account of abstinence
from sweet liqour, and whose upper eyelids tremble when you are near: these
eyes take on the semblance of the beauty of a blue lotus that is trembling with
the movement of a fish.

And her lovely thigh will tremble, being without the impressions of my
fingernails, caused to abandon it long-accustomed string of pearls by the
course of fate, used to the caresses of my hand at the end of our enjoyment,
and as pale as the stem of a beautiful plantain palm.

At that time, O cloud, if she is enjoying the sleep she has found, remaining
behind her, your thunder restrained, wait during the night-watch. Let not the
knot of her creeper-like arms in close embrace with me her beloved, somehow
found in a dream, fall from my neck at once.

Having woken her with a breeze cooled by your own water droplets, she will
be refreshed like the fresh clusters of buds of the malati. Your lightning held
within, being firm, begin to address her with words of thunder; she, the proud
on whose eyes are fixed on the window occupied by you:

‘O you who are not a widow, know me to be a cloud who is a dear friend of
your husband. With messages stored in my heart I have arrived at your side,
and with slow and friendly rumblings I urge along the road a multitude of
weary travellers who are eager to loosen the braids of their womenfolk.’

When this has been said, like Sita looking up at Hanuman, having beheld you
with her heart swollen with longing and having honoured you, she will listen
attentively to you further, O friend. For women, news of their beloved that
brought by a friend is little short of union.

O long-lived one, following my instructions and to bring credit to yourself,
address her thus: ‘Your partner who resides at the ashram on Ramagiri, who is
still alive though separated from you, inquires after your news, madam. This
is the very thing that is first asked by beings who may easily fall into
misfortune.

He who has become eager to say what is to be said in words in your ear, in the
presence of your female friends, with a desire to touch your face, he who is
beyond the range of your ears, unseen by your eyes, addresses these words
composed on account of his desire, through the agency of my mouth:

“I perceive your body in the priyangu vines, your glances in the eyes of the
startled deer, the beauty of your face in the moon, your hair in the peacock’s
feathers and the play of your eyebrows in the delicate ripples on the river, but
alas, your whole likeness is not to be found in a single thing, O passionate
one.

Having painted your likeness, with mineral colours on a rock, appearing angry
because of love, as soon as I wish to paint myself fallen at your feet, my
vision is clouded again and again with copious tears. Cruel fate does not
permit our union, even in this picture.

Watching me with my arms stretched up into the air for an ardent embrace
when you have somhow been found by me in a vision or in a dream, the local
deities repeatedly shed teardrops as big as pearls on the buds of the trees.
Those winds from the snowy mountains which having broken open the sepals
of the buds of the devadaru trees become fragrant with their milky sap and
which blow southwards—they are embraced by me, O virtuous one, with the
thought that your body might previously have been touched by them.

How can the night with its long watches by compressed into a moment? How
may a day become cooler in every season? Thus my mind, whose desires are
difficult to satisfy, is rendered without refuge by the deep and burning pangs
of separation from you, O one of trembling eyes.

Indeed, ever brooding, I maintain myself by means of myself alone.
Therefore, O beautiful one, you also should not fear. Whose happiness is
endless or whose suffering is complete? The condition of life rises and falls
like the felly of a wheel.

The the holder of the bow called Sharnga rises from his serpent bed, the
curse will end for me. Having closed your eyes, endure the remaining four
months. After that, we two will indulge our own various desires, increased by
separation, on nights lit by the full autumn moon.”

And he said further, “In the past you embraced my neck as we lay on our bed,
you called out something in your sleep and woke up. When I asked over and
over, you said to me with an inward smile, ‘I saw you in my dream enjoying
another girl, you cheat!’

Having ascertained from the telling of this account that I am well, do not be
suspicious of me on account of any rumour, O dark-eyed one. They say that
love somehow perishes during separation, but because there is no fulfilment,
the love for that which is desired with increasing desire, becomes a even more
ardent.”’

Having comforted her thus, your friens whose sorrow is great in her first
separation, return at once from the mountain whose peaks were cast up by the
bull of three-eyed one. Then you should prop up my life which flags like
kunda flowers in the morning with her words about her welfare, and an
account of her.

I hope, friend, that you are firmly resolved upon this friendly service for me. I
certainly do not regard your silences as indicating refusal. When requested
you also apportion rain to the cataka cuckoos in silence, for the response of
the virtuous to those who make a request is the performance of that which is
desired.

Having undertaken this favour for me who bears this request that is unworthy
of you, with thoughts of compassion for me, either out of friendship or
because you think that I am alone, proceed to your desired destination, O
cloud, your splendour enhanced by rainy season, and may you never be
separated like this even for a moment from your spouse, the lightning.

Surely the face of my beloved, her eyes swollen from violent weeping, the colour of her lower lip changed by the heat of her sighs, resting upon her hand, partially hidden by the hanging locks of her hair, bears the miserable appearance of the moon with its brightness obscured when pursued by you. love expressed in a magnificent poem. tony

Simply Superb flight of imagery and the style of unfolding the narration. Thanks for sharing it here.