The Loss Of Swift

The world lost a talented actor one year ago today.
After being on Earth for almost 83 years, he passed away.
He starred in 'Keeping Up Appearances' and 'The Old Guys'.
People also loved his performances in '1990' and 'Pack of Lies'.
He also entertained us when he starred in 'Othello' and 'Born and Bred'.
His entire fanbase has grieved for 365 days because he is dead. 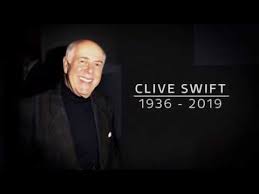 Randy Johnson
Saturday, February 1, 2020
Topic(s) of this poem: acting,celebrity,england,goodbye,tribute
poem poems Lies
Download image of this poem.
Report this poem
POET'S NOTES ABOUT THE POEM
Dedicated to Clive Swift who died one year ago today on February 1,2019.
READ THIS POEM IN OTHER LANGUAGES