It was many and many a year ago,
In a kingdom by the sea,
That a maiden there lived whom you may know
By the name of ANNABEL LEE;
...

The sea is calm to-night.
The tide is full, the moon lies fair
Upon the straits; - on the French coast the light
Gleams and is gone; the cliffs of England stand,
...

THAT crazed girl improvising her music.
Her poetry, dancing upon the shore,
...

Read Poem
The World Is Too Much With Us; Late And Soon William Wordsworth

The world is too much with us; late and soon,
Getting and spending, we lay waste our powers:
Little we see in Nature that is ours;
We have given our hearts away, a sordid boon!
...

I have seemingly missed your words of love,
Those words that were written in the sand
And erased by the first wave.
Do you remember, my love?
...

Leaning into the afternoons I cast my sad nets
towards your oceanic eyes.

There in the highest blaze my solitude lengthens and flames,
...

To and fro, to and fro
In my little boat I go
Sailing far across the sea
All alone, just little me.
...

Full fathom five thy father lies;
Of his bones are coral made;
Those are pearls that were his eyes:
Nothing of him that doth fade
...

The rain is raining all around,
It falls on field and tree,
It rains on the umbrellas here,
And on the ships at sea.
...

He clasps the crag with crooked hands;
Close to the sun in lonely lands,
Ring'd with the azure world, he stands.
The wrinkled sea beneath him crawls;
...

There is no magic any more,
We meet as other people do,
You work no miracle for me
Nor I for you.
...

Rise, brothers, rise; the wakening skies pray to the morning light,
The wind lies asleep in the arms of the dawn like a child that has cried all night.
Come, let us gather our nets from the shore and set our catamarans free,
To capture the leaping wealth of the tide, for we are the kings of the sea!
...

O beautiful for spacious skies,
For amber waves of grain,
For purple mountain majesties
Above the fruited plain!
...

Lie back daughter, let your head
be tipped back in the cup of my hand.
Gently, and I will hold you. Spread
your arms wide, lie out on the stream
...

There are certain things - as, a spider, a ghost,
The income-tax, gout, an umbrella for three -
That I hate, but the thing that I hate the most
Is a thing they call the Sea.
...

Read Poem
A Love By The Sea William Ernest Henley

Out of the starless night that covers me,
(O tribulation of the wind that rolls!)
Black as the cloud of some tremendous spell,
...

O tower of light, sad beauty
that magnified necklaces and statues in the sea,
calcareous eye, insignia of the vast waters, cry
of the mourning petrel, tooth of the sea, wife
...

Where are your monuments, your battles, martyrs?
Where is your tribal memory? Sirs,
in that gray vault. The sea. The sea
has locked them up. The sea is History.
...

Without waves, there is no sea. Even the sea is a drunken sea.
...

Here is the sea very much deep,
And see the sea so blue;
I wonder how much water it keeps,
Look, here is the sea
...

Epitaph for a Palestinian Child
by Michael R. Burch

That morning the boy came to know words. Of course all his life he had spoken words like everyone else, and was even able to write some. For a boy of his age, his vocabulary was relatively large. In fact he was quite clever at using them to threaten, to cheat, to cajole and sometimes to tell the truth, but that was the extent of it. But now, using words just for such utilitarian purposes seemed to him somehow insignificant.

Something trivial triggered it. That morning he was sitting at the tip of a jetty, dangling his feet just as anyone else would do. During this time tepid splashes from waves wetted his bare ankles. There was no one around he could talk to and it was too insignificant an incident to talk about. But whatever caused it, at that instant he visualized in his mind the word ‘Sea' and the word ‘Me' at the very same time.

Presently he had nothing really to think or speak about. So he mindlessly let the two words ‘Sea' and ‘Me' knock against each other like tiddlywinks inside his head. Then something odd happened. The word ‘Sea' grew bigger and bigger in his head, and brimmed over to merge into the sea in front of him the way two drops of water would, and suddenly they dissolved into one.

At the same time, the word ‘Me' grew smaller and smaller like the tip of a thin needle, but never disappeared. Rather, the smaller it grew, the brighter it gleamed, moving from his head down toward his center, now floating like a single speck of plankton in the ‘Sea' that converged with the sea.

For the boy this was an unimaginable experience, but at least at the beginning he was not surprised or uneasy. Instead, he even said "I see," looking smug. But of course he was not exactly unruffled. He felt a certain powerful force, not his own, well up inside himself.

Rising up before he knew it, he mumbled, "I see, the sea means the sea." Having said that he suddenly felt like laughing out loud. "Sure, this is the sea. It is not something named the sea, but it is the sea." If his buddies were with him, such a monologue would be laughed away. He thought about that in a corner of his mind, and he mumbled again. "I am me. I am, right here." Then this time he felt like crying.

All of a sudden he felt terrified. He wanted to dump everything out of his head. He wanted to make both the ‘Sea' and the ‘Me' vanish. He was afraid that his head might explode if even a single word came to his mind. Every single word might turn into something of unknown size and mass, and once any word occupied his head, it might connect to every word all over the world, and at the end he might be gobbled up by the world and die. That's how he felt.

But, just like any boy of his age, he could not lose sight of his own self. Before he realized it, he was trying to pop open a can of Coca-Cola he had bought on his way to the jetty and was holding in his hand. To his surprise he could not do it. Why? Because the moment he looked at the can in his hand, an uncountable number of words like a swarm of locusts swooped down en masse inside his head.

However that was not necessarily as terrifying a situation as he had imagined. Don't run away, stand firm! He opted for the only path to overcome fear, just as he would when fighting against much taller and older boys. In his hand, the can, painted in red and white, radiated words, absorbed words and breathed as if it were a living thing. Not knowing whether he was tormented or pleased, he faced the swarm of words. But once he separated them one by one, the huge swarm, which seemed like a swirling evil fog, was not at all different from the words on the page of a familiar comic book.

This battle of sorts actually took place in a flash, like in a nightmare. If, for instance, he saw the infinite universe that started or ended at the tip of his can, he was totally unaware of it. One might be able to opine that he named every bit of the unknown about to swallow him with all the vocabulary he could muster, which included his future vocabulary that was yet dormant in his subconscious.

When the totality of words, which can be likened to a single yet-unknown extraterrestrial life, converged into a vision of a volume of the dictionary, the battle was over. The sea was back to being the entity named the sea, and was again calmly undulating. And the boy pulled the tab of his Coca-Cola can, and drank up the foaming dark liquid in one gulp, and choked and coughed. "It's just a Coca-Cola can," he thought. A moment ago it was a monster.

He stomped on the emptied can, instead of throwing it away into the sea as he always did. His bare feet hurt a little but he stomped on it again and again until the can was totally flattened. He himself was rather embarrassed with the strange experience. He did not even think of telling others about it, nor learn anything from it. Even if he should recall this incident in an incoherent context as he lies in his death bed decades from now, it will have turned into something hard to capture like a whiff of wind, along with all other memories, hence it will surely stimulate his sense different from his declining five senses to frighten him again.

That morning, though, the boy looked down at the flattened Coca-Cola can, and simply mumbled, "not for incineration."
...

Read Poem
The Sea Of Respect Is The Angel Of Respect. Raymond Sawyer

Time after time thus one wish to sail on the sea but the more one wish to sail on the sea is like a wish for the angel for who's eyes sparkle in the sky yet for every sparkle for the light of respect will touch a heart that stand by the sea for it's the sea of respect that the angel fill with respect thus every heart that been touch with respect is the heart with the light of life and yet just when the sun raise for one feel a warm smile but yet the sea of respect is the angel of respect.
... 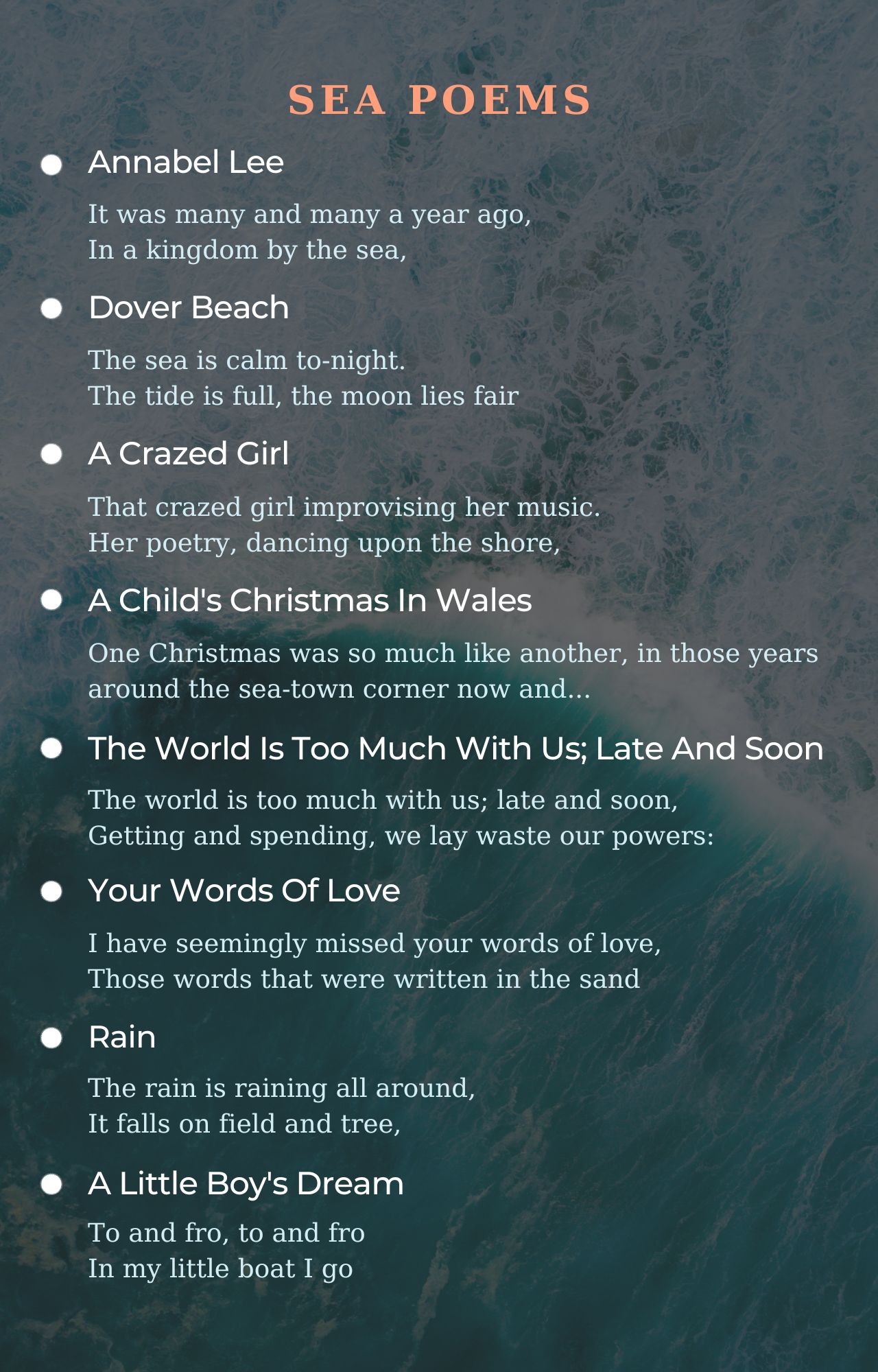