If I Were In Charge Of The World Judith Viorst

If I were in charge of the world
I'd cancel oatmeal,
Monday mornings,
Allergy shots, and also Sara Steinberg.
...

And if it snowed and snow covered the drive
he took a spade and tossed it to one side.
And always tucked his daughter up at night
And slippered her the one time that she lied.
...

Sometimes I can almost see, around our heads,
Like gnats around a streetlight in summer,
The children we could have,
The glimmer of them.
...

I'll tell you something: every day
people are dying. And that's just the beginning.
Every day, in funeral homes, new widows are born,
new orphans. They sit with their hands folded,
...

From Child's Garden of Verses

I have a little shadow that goes in and out with me,
And what can be the use of him is more than I can see.
...

I take my dreams and make of them a bronze vase
and a round fountain with a beautiful statue in its center.
And a song with a broken heart and I ask you:
...

Here I love you.
In the dark pines the wind disentangles itself.
The moon glows like phosphorous on the vagrant waters.
Days, all one kind, go chasing each other.
...

And sometimes it happens that you are friends and then
You are not friends,
And friendship has passed.
And whole days are lost and among them
...

Read Poem
Implications Of One Plus One Marge Piercy

Sometimes we collide, tectonic plates merging,
continents shoving, crumpling down into the molten
veins of fire deep in the earth and raising
tons of rock into jagged crests of Sierra.
...

When I was sick and lay a-bed,
I had two pillows at my head,
And all my toys beside me lay,
To keep me happy all the day.
...

Slowly the west reaches for clothes of new colors
which it passes to a row of ancient trees.
You look, and soon these two worlds both leave you
one part climbs toward heaven, one sinks to earth.
...

Sitting on the sands of the Bay, a small sea
Gigantic waves throw themselves on the sands, I see;
Methinks a true fact the sea never knows, is
How horribly, hungrily and thirstily it roars!
...

Read Poem
Sometimes With One I Love Walt Whitman


SOMETIMES with one I love, I fill myself with rage, for fear I effuse
unreturn'd love;
But now I think there is no unreturn'd love--the pay is certain, one
...

I ain't afeard uv snakes, or toads, or bugs, or worms, or mice,
An' things 'at girls are skeered uv I think are awful nice!
I'm pretty brave, I guess; an' yet I hate to go to bed,
For, when I'm tucked up warm an' snug an' when my prayers are said,
...

Dreams are but interludes which Fancy makes;
When monarch Reason sleeps, this mimic wakes:
Compounds a medley of disjointed things,
...

Life is never ending process
It has no pause or recess
It beats on in different form
Constant changes with very good reform
...

I hid the love within my heart,
And lit the laughter in my eyes,
That when we meet he may not know
My love that never dies.
...

"Excuse me." The young boy said to the poet, "If you don't mind me asking…where do you find your words? "
The old poet smiled at the young boy…"Sometimes…" she said, "they're in the voices of the birds."

Sometimes you learn from it
...

Sometimes the feelings rot and decay,
...

...sometimes there are not enough rocks


sometimes there are too many rocks
...

...sometimes there are not enough rocks


sometimes there are too many rocks
... 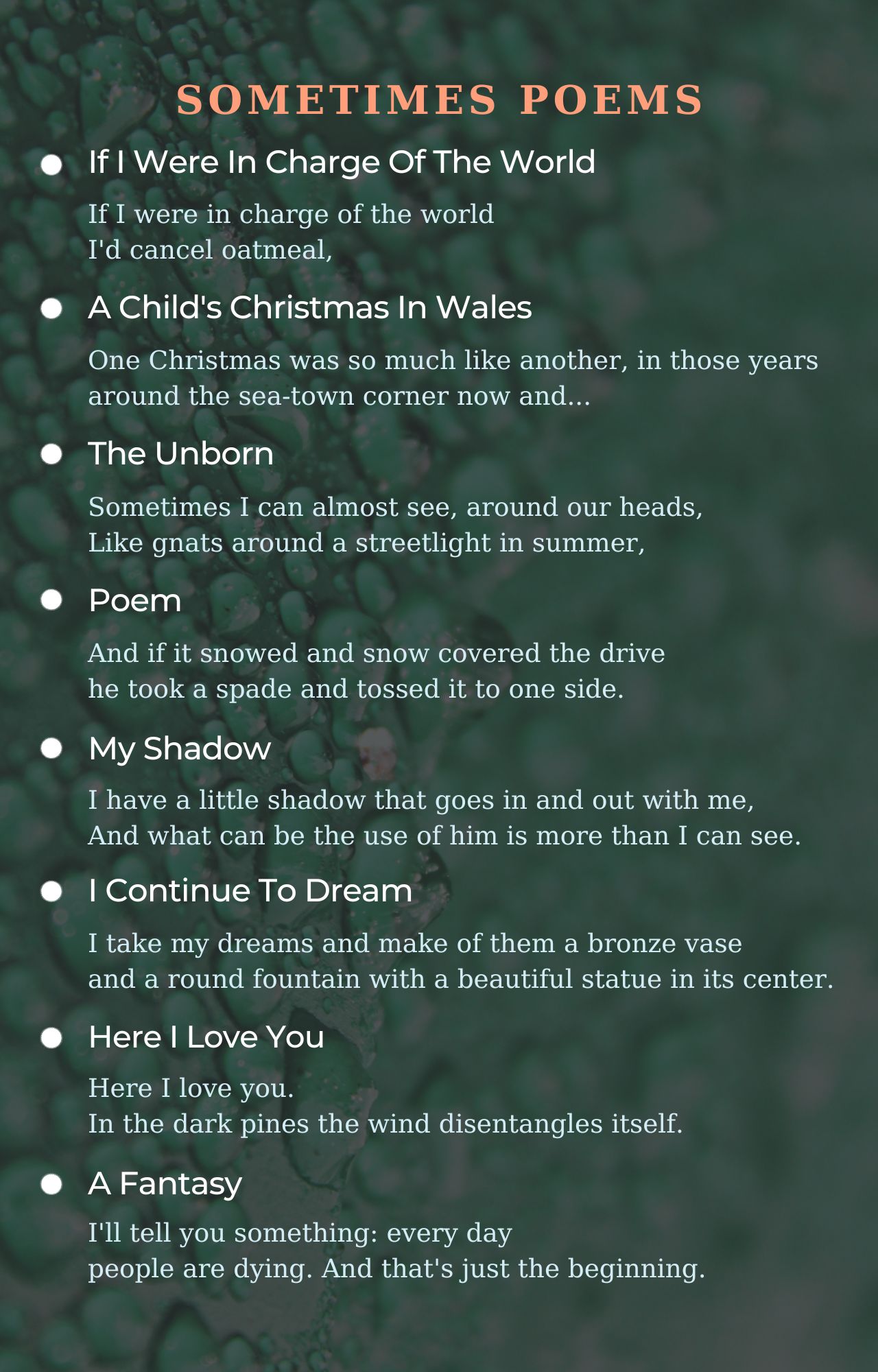