A Blitz On The Seven Years War Poem by Gayathri Seetharam

A Blitz On The Seven Years War

A Blitz on the Seven Years War
-Gayathri B. Seetharam
Please note: The Blitz is for 50 lines and I got tired after 20 lines. It is indeed very hard to compose poems this way.

It is still the summer of 2020 and the quarterback's out
But the quarterback's not sacked literally
We are out of synch with sports for it is the COVID-19 virus pandemic
And out of whack with reality
Are we whacked out of our wits if we look for entertainment in history
The Seven Years War was not all wits and words
And words and rhymes say that we have to go back far in time to 1954
When far in the Ohio Valley, the French - First Peoples Force expelled British colonists, say rhymes with refrain
And this local clash escalated into wars all around the world and you could call this a refrain of climax
Considering climax as the theme, Quebec was under attack by a British fleet and army
My theme and style is English and Fighting ended in 1763 when France and Britain signed the Treaty of Paris
Their style of composition of war was influenced by the indigenous people
And coming from composition and substance, I chose the Delaware chief's quote: "...We have great reason to believe you intend to drive us away and settle in the country or else why do you come and fight in the Land God has given us..."
The English and French who differed in their substance and style had to make peace amongst themselves and The outcome was a crushing British victory that made Great Britain the world's leading colonial power
This resulted in a style of poetry in 1763, all Canadian but still an English colony
Since then, there has been poetry and prose in Canada,and Quebec which has the ways of the French people believes that it is patriotic and poetic to be all French
To them, the English Canadian prose way is prosaic
If prosaic is archaic, the French say, I, as an English Canadian say, it is all about English - French pro rata
And the ratio says that archaic is thoroughly interesting
And I muse to myself that the history lesson I had was interesting. 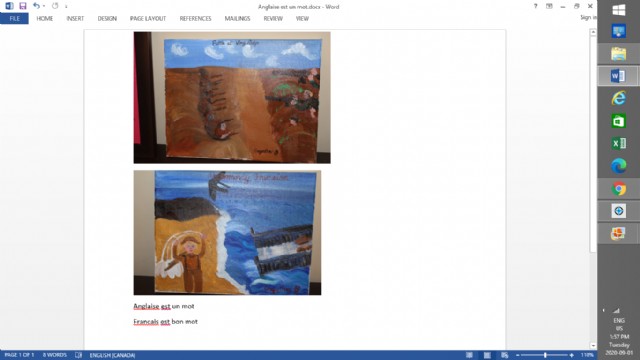 I would like to translate this poem
Poems By Gayathri B. Seetharam
A Ballad On Beverley Mclachlin, The Ex-Chief Justice Of The Supreme Court Of Canada
Here's You, My Dear Departed Father
Hope For An Even Better Tomorrow
A Girl Is Also Special
Black And White
See All Poems by Gayathri B. Seetharam
Next Poem
12 / 359
Previous Poem