A Challenge To The Dark Charles Bukowski

To you who'd read my songs of War
And only hear of blood and fame,
I'll say (you've heard it said before)
'War's Hell! ' and if you doubt the same,
...

The anguish of the earth absolves our eyes
Till beauty shines in all that we can see.
War is our scourge; yet war has made us wise,
And, fighting for our freedom, we are free.
...

Oh mother, mother, where is happiness?
They took my lover's tallness off to war,
Left me lamenting. Now I cannot guess
What I can use an empty heart-cup for.
...

My mind says - Leave it and proceed!
My heart says - Stay and believe,
Is it a tug of war between mind and heart?
...

Long ago the Gladiators,
When the call to combat came,
Marching past the massed spectators,
Hailed the Emp'ror with acclaim!
...

War is never over
Thought the treaties may be signed
The memories of the battles
Are forever in our minds
...

ADIEU, O soldier!
You of the rude campaigning, (which we shared,)
The rapid march, the life of the camp,
...

Not marble nor the gilded monuments
Of princes shall outlive this powerful rhyme;
But you shall shine more bright in these contents
Than unswept stone, besmear'd with sluttish time.
...

How can I, that girl standing there,
My attention fix
On Roman or on Russian
Or on Spanish politics?
...

In the war these heroes have died
Though the war was illegal,
They are martyrs
They have shed their blood in the war
...

Last year we fought by the head-stream of the Sang-kan,
This year we are fighting on the Tsung-ho road.
We have washed our armor in the waves of the Chiao-chi lake,
We have pastured our horses on Tien-shan's snowy slopes.
...

Read Poem
Do Not Weep, Maiden, For War Is Kind Stephen Crane

Do not weep, maiden, for war is kind.
Because your lover threw wild hands toward the sky
And the affrighted steed ran on alone,
Do not weep.
...

Guns,
Long, steel guns,
Pointed from the war ships
In the name of the war god.
...

Save Ukraine As War Is Disastrous Bernedita Rosinha Pinto

Make no mistakes about war, as...

War takes away a country's peace
war causes injuries and loss of lives;
...

LET US FIGHT JOINTLY THE WAR

Syria beware of meanness please
you are about to wonder why meanness please
reality is war in a moment of time reflected in eternity please
I wander on the topic of war forgive me please
... 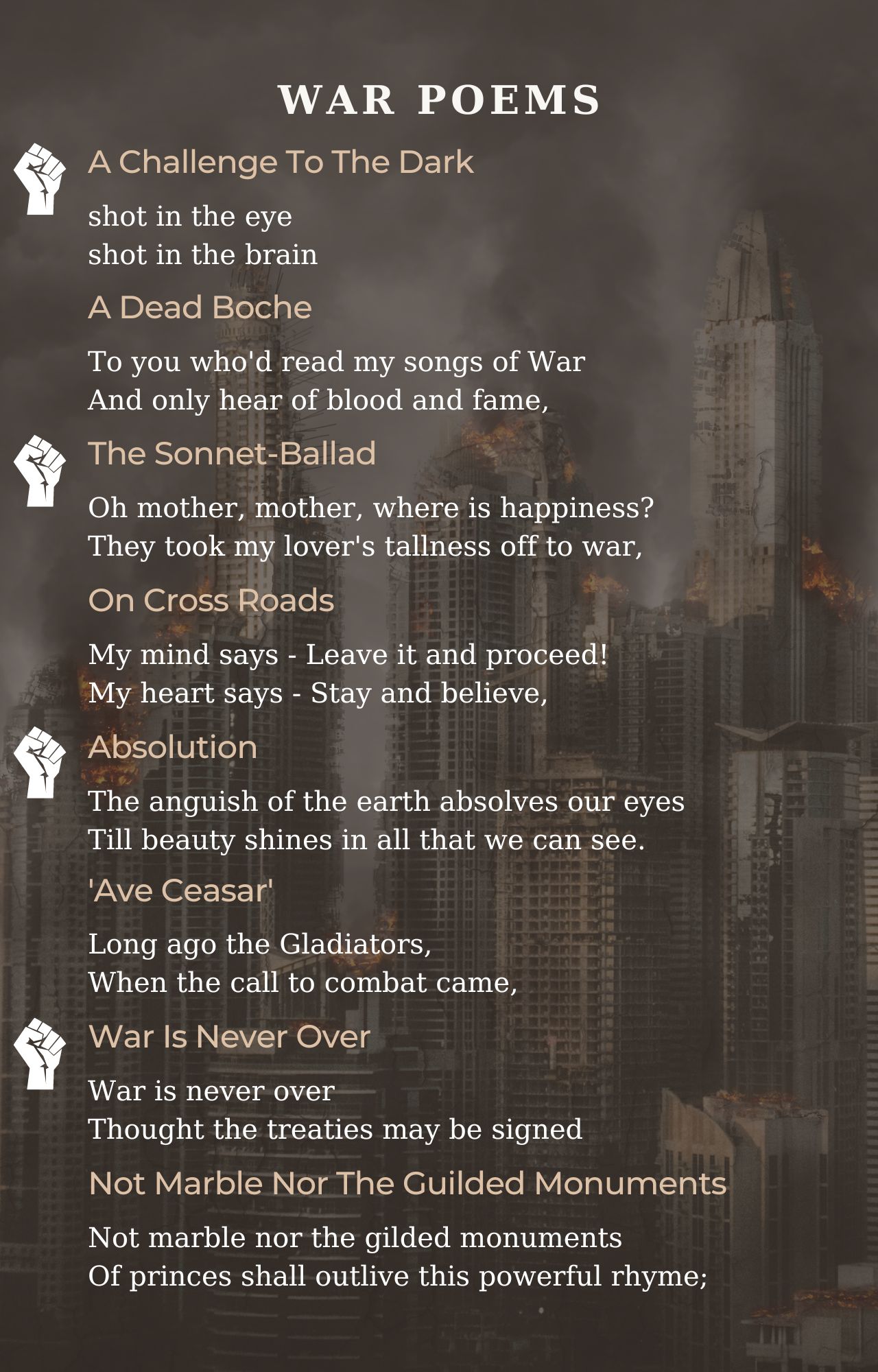