Black and white
-Gayathri B. Seetharam
The USA is fighting for its civil rights
Which have been violated time and time again
The obvious inference that all men are created equal,
An offshoot in later years from Thomas Jefferson's Declaration of Independence
With emphasis on the colour of all races
Which was not prevalent in the original basis of the country
Which granted citizenship to only white men,
Has been murdered in brutality;

George Floyd, an African-American criminal under police custody,
Was killed when unarmed by a white police officer, Derek Chauvin,
And as reports go, the police officer knelt on his neck until he begged for mercy
But I think that God came to his rescue much too late for he died;

The country divided by its two identities and the other immigrant nature
Of its content has to come to terms with the fact that there is hatred
From the white people but in all good faith for as a Canadian citizen,
I do rely on cops to offer me and my family protection,
The police could have hatred for the criminal classes and not completely against the black community;

Police brutality is a feared term which rears its ugly head
Over and over again but this time around, it has been responsible for a death,
That has resulted in many people fighting for their rights
All I remember is the 1992 Los Angeles riots when Rodney King, the black victim of police brutality and legal injustice
Tearfully begged if all Americans could get along;

On a related aside, (for being white for some people,
Immediately results in a sort of superior attitude
And I am also talking about Pres. Donald Trump,
Who in his perhaps, well meant efforts to contain the riots,
Is belittling the seriousness of the problem in America,
The hostility towards the black people from people in higher positions
And the resentment that black people feel towards white people for having oppressed them for centuries) ,
I watched a British man advertise his show on Rogers TV in Toronto,
As two things that the British are obsessed with,
Alcohol and the fact that they are a nation of white people;

Originating from an Indian background, I would like to tell this man
That the British colonised only non-white nations
And even Canada and America began as being occupied by the indigenous people
And were British colonies to begin with;

Why are white people so preoccupied with their whiteness?
I remember back in July 1997 when CBC was telecasting the last of the British rule in Hong Kong,
The famous newscaster, Peter Mansbridge sadly bemoaning this- what seemed to be a just act then,
Said that the last bastion of white colonial power was coming to an end
And do recall that he did not have a stake in either side
And I had heatedly written an essay which began with this thoughtless comment
And the Toronto Star editor did not deign to publish this one
And I see a remarkable likeness to The Globe and Mail editor-in-chief
Who I am hoping will publish and pay me in the event that PM Justin Trudeau does not
And on an another aside, China is making me eat my words
For it is denying Hong Kong its democratic style of government;

Coming back to my topic of discussion, whiteness in society means
That the person may be born automatically with a silver spoon
And I read a couple of interesting articles on the internet on whiteness in Canada and America
But I am reverting to a plan that I have to write an essay on older neighbouring friends in their late sixties or early to mid-seventies,
Wives who are feminist women while being successful homemakers
And the ace up my sleeve is to ask them how it was to be a young woman before and after the feminist revolution
There are one black Canadian couple, immigrants from Jamaica, also refined,
Of whom I would like to find out if Toronto was as receptive to blacks as it is now;

If there is a wealth of difference between white and black,
Scientifically speaking, white light breaks up into the seven colours of the rainbow
And all the seven colours of the rainbow blend in to make up black colour,
Legal documents have to be in black and white
As do theses and I wish that black and white people get along as well
As the black and white theses I wrote and presented in 1990,1997 and 1998
And the U of Toronto research associate employment contracts I signed in Sept 2000 and renewed in Sept 2001
And the Iogen Corporation contract I signed in Aug 2002. 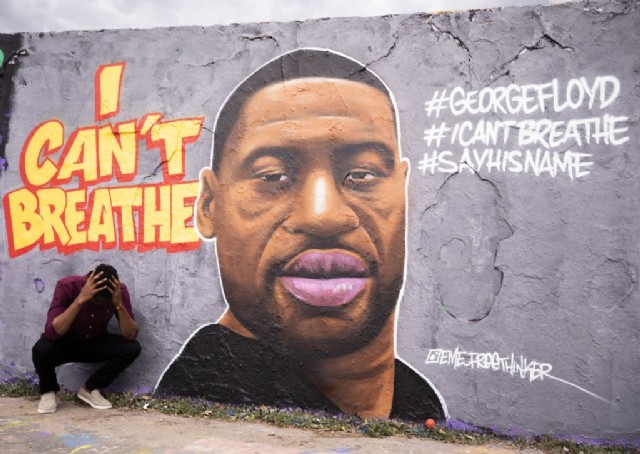 I can’t breathe too. May I invite you to read my poem, “Mother of Emmet Till” on the same theme.

great poem of the time oppressed black by the white.... oh.... . white, agent of inhumane, the house full of insane

Black and white our Lord Jagannath and Balabhadra