A Pony And A Fancy

Robby Morrison, has a birthday pony
'And on his pony, he did ride'
Up the pathway along land borders
With a smile on his face ten miles wide

Near and far as they passed slow cars
Every dog carried on an awful whining
Proud Rob was, of all the buzz
Until he observed a young girl likewise riding

There she was upon her foal
Young Robby found her so exciting
By his side and with a passing stride
She gave him, eyes; Then onward, fast as lightning

Who she was, this amazing girl
Robby stayed behind her, watching
He felt a stir, like butterflies
This 'lively' girl he found enticing

'No Guts- No Glory, ' If none venture chance
Poor Rob fumbles in a show-off fancy
And from the pony dance; Young Robby tips his hat
He made a new friend very happy 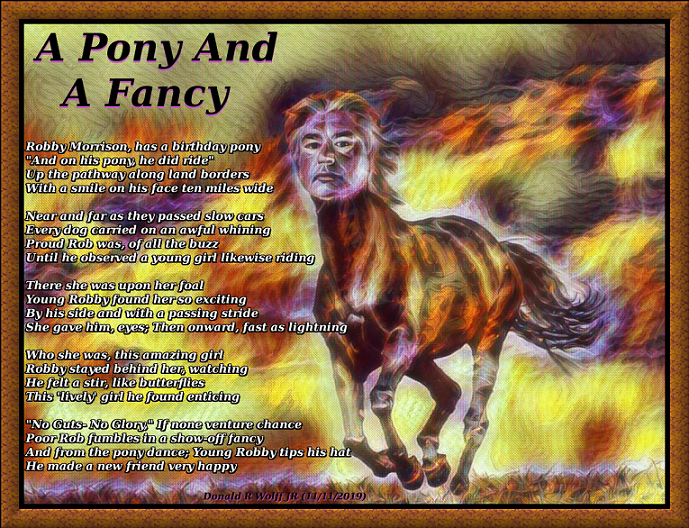 Donald R Wolff JR
Saturday, March 6, 2021
Download image of this poem.
Report this poem
READ THIS POEM IN OTHER LANGUAGES