Peter Snell was an unknown athlete
when he won the 800 metres gold medal
at the 1960 Rome Olympics, lunging at the tape
to just shade Roger Moens on the line.

I likedthe grass track at Western Springs
and some evenings Peter Snell was there too,
training for the 1964 Tokyo Olympics
where he won the 800 metres and 1500 metres.

Snell set world and Olympic records at various distances,
yet the year after the Tokyo triumphs he retired.
The trajectory of his career was like a shooting star.
Then he moved across the sky to the United States. 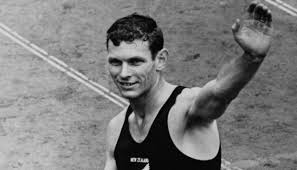 Michael Walker
Thursday, January 2, 2020
Topic(s) of this poem: sport
poem poems january Gardens
Download image of this poem.
Report this poem
POET'S NOTES ABOUT THE POEM
Peter Snell is New Zealand's greatest athlete, which was acknowledged
when he was voted 'Athlete of the Century' in this country. I only had space to touch on his finest achievements, not all them. Peter Snell became an American citizen in 1994, and he was knighted by the New Zealand government in 2009.It was a well deserved honour.
Later in life Sir Peter was made the patron of Age Concern in Auckland, New Zealand. One important issue was dealing with elder abuse, which is not uncommon in my country. Peter Snell said: 'If there is any case of serious elder abuse, I want to know about it'.
COMMENTS OF THE POEM
Rajnish Manga 03 January 2020

Nice to know about this great athlete and his achievements in International sporting events having broken several world records. He was rightly adjudged as 'Athlete of the Century' in New Zealand. His humanitarian work after his retirement from active sports in 1964 remained very noteworthy.

did a first grader write this

Michael, with PH as it is now, you may no longer visit, or you may but never see this note. I hope you are well. i persevere, now and then, hoping PH will recover someday to its glory. bri : )

A wonderful tribute to Peter Snell of New Zealand who made his country men proud by winning gold in Olympics and breaking records as an athelete.The stories of such players are very motivating.Thank you Michael for this lovely piece of poem and also Congratulations for being selected as the Poet of the Day!

Affirming heroes is not hero worship, which is getting out of date.

Thanks for your generous sentiments. I do think that affirming heroes has a place in poetry still.

Beautiful! I love the simplicity of language, no embellishments. I got to know an athlete too

Thanks for your positive endorsement of the poem.

0 0
See All Comments
READ THIS POEM IN OTHER LANGUAGES

I would like to translate this poem
Poems By Michael Walker
A Soccer Report. (Haiku) .
A Farewell Note.
Le Dieu Qui Veille Sur Tout Peut-Etre.(Translation) .
The Tree Of Life.
A Clairvoyant.
See All Poems by Michael Walker
Next Poem
207 / 168
Previous Poem