The exclamation point as we know it
perhaps appeared first on wall of a cave
where hunter with spear was poised to throw it
at woolly mammoth, in a manner brave,

seen in cavern French; then to his dismay,
one witnesses onward deeper inside
the would-be slayer get trampled by prey,
alone and bereft of his prior pride.

So went an article with the surmise
that this was followed by reference mark
pinpointing the danger to emphasize
the menace of death, in a warning stark!

‘Twas claimed to resemble symbol with dot
topped by a line in direction of sky.
Whether the story is valid or not,
it furthered my search to demystify

the origins of point exclamation,
more often presumed to joy indicate
from Latin ‘io', for figuration
with o below i thus to annotate.

The word meant ‘hurray', while in time the sign
had a smaller o, which a dot became
underneath, or so assumptions opine,
to express intensity as its aim.

Let us move on to the galaxy pair
that are certain to crash and merge someday
espied in Boötes the Herdsman's lair,
which bring to mind in empyrean way

the designation for cries of surprise,
coming just after a vehement phrase
(defined ecphonesis rhetoricwise) ,
called VV three forty, sure to amaze!

Chandra and Hubble were image sources,
purple for first; second, red, green, and blue.
Though in early stage, collision courses
are causing the cosmic hullabaloo

of a galactic amalgamation
that is inescapably taking place
with countenance huge of perturbation
in the boundless beyond of outer space!

into a sizable combination
four hundred fifty million light-years far
punctuating their scrape by formation,
as earthlings peer from the roost where we are.

But this won't jell for a few million years.
Who knows by that time what morrows may dawn
replete with a host of sorrows and cheers?
Meanwhile our Goldilocks saga goes on…

As you look upon us from your vast height
captured in clutches of gravity mad,
a dyad in throes of pitiless plight,
might you be bellowing, ‘yikes! ' or ‘egad! '? 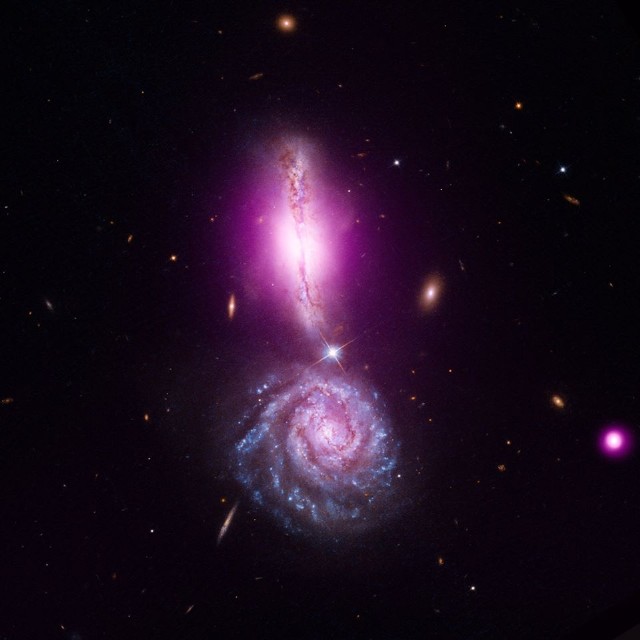 Harley White
Wednesday, April 15, 2020
Topic(s) of this poem: astronomy ,galaxy,history,human condition,imagination,warning
poem poems warning
Download image of this poem.
Report this poem
Poems By Harley White
Cosmic Jewels
From Dust To Dust
Put Away Childish Things
Cosmic Lens
Sculptor In Space
See All Poems by Harley White
POET'S NOTES ABOUT THE POEM
Some sources of inspiration were the following…

Article ~The exciting history of the exclamation point…

Article ~What is the origin of the exclamation mark?

Image description: This composite image of VV 340 contains X-ray data from Chandra (purple)and optical data from Hubble (red, green, blue) . The two galaxies shown here are in the early stage of an interaction that will eventually lead to them merging in millions of years. The Chandra data shows that the northern galaxy contains a rapidly growing supermassive black hole that is heavily obscured by dust and gas. Data from other wavelengths shows that the two interacting galaxies are evolving at different rates.