Rating: ★4.8
Put away childish things
yet keep the childlike wonder.
Though dreams be rent asunder
our wishes still have wings.

Put away childish speech
but not the constant queries
that question rooted theories
which reason cannot reach.

Put away childish ken,
though artless ways of seeing
in any age of being
will find a poet's pen.

Put away childish thought
yet not imagination
which sparks our inspiration
beyond what we are taught.

Put away childish whim
yet not delight in playing,
then when the world's dismaying,
our days won't seem so grim.

Put away childish fears.
Nonetheless, through thick and thin
hang on to the child within,
the laughter and the tears,

all the livelong years…

Put away childish things.
While our dusty death is nigh,
the utter self shall not die,
and karmic kismet clings.

Put away childish things,
though then in mirror darkly
we face our image starkly,
plus suffer destined slings.

Put away childish pain
yet not sensations tender
for sunset's golden splendor
or soothing thrum of rain,

therein the simple joys remain…
Nor questing spirit ever lose,
while on the pathway that we choose,
neither from love refrain

which makes a heaven of earth's domain.

Still, throughout, with faith unshaken,
seek enlightenment to waken,
thus the bliss supreme to gain,
plus not to live and die in vain…

Put away childish things
but hold to yearning youthful
to grasp the learning truthful
which timeless wisdom brings. 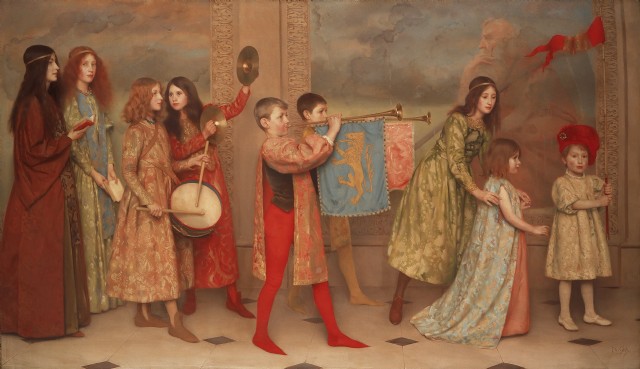 Harley White
Saturday, October 7, 2017
Download image of this poem.
Report this poem
Topic(s) of this poem: life and death
POET'S NOTES ABOUT THE POEM
The following well-known quotation provided the initial literary inspiration for the poem…

"When I was a child, I spoke as a child, I understood as a child, I thought as a child; but when I became a man, I put away childish things. For now we see in a mirror, darkly, but then face to face."

Further inspiration derived from the teachings and writings of Nichiren Daishōnin, as well as Martin Bradley's interpretative writings about them…

Painting ~ "A Pageant of Childhood" ~ Thomas Cooper Gotch,1899
READ THIS POEM IN OTHER LANGUAGES

I would like to translate this poem
COMMENTS
Prabir Gayen 07 January 2021
Beautiful poem dear poet friend.....thanks /////
1 0 Reply
Dennis Spilchuk 04 October 2020
Inspirational. Nicely written.
1 0 Reply
Harley White 08 January 2021
Thanks for the nice words...
0 0 Reply
William Lindsay 11 November 2018
Signposts a path to a more meaningful philosophy of education. As an educator Iv`e developed a growing concern that teaching, controlled and shaped by an obsession with assessment, limits creativity and the pursuit of excellence. Thank you...wl.....
3 0 Reply
Harley White 11 November 2018
Educators are so crucial in our formative years. I agree with your ideas and thank you for your thoughtful remarks!
0 0 Reply
Baquee Billah Ahmed 02 September 2018
sweet poem it is.................................
1 0 Reply
Harley White 02 September 2018
Thank you for taking the trouble to comment.
0 0 Reply
Baquee Billah Ahmed 02 September 2018
U most welcome mam.....Its was my plesur to read ur poem and comment on it
0 0 Reply
Aqua Flower 06 May 2018
This a skillfully and clevely crafted about childhood and adulthood. There are many childish things we need to let go but as your poem so perfectly expresses, there are things to take hold of and keep, like imagination! ! ! My favorite line: Put away childish thought yet not imagination which sparks our inspiration beyond what we are taught So true is that line and manyother lines throughout this poem! Wonderfully written! then when the world's dismaying, our days won't seem so grim.
2 0 Reply
Harley White 06 May 2018
It is gratifying to see that you picked up so completely what I was trying to convey in the poem. I appreciate your comment and response! Thank you!
0 0 Reply
Seamus O Brian 25 February 2018
An expansive and skillfully wrought exhortation that bears much wisdom. I am one who quickly abandons rhyming schemes in favor of specificity of thought, so when I come across a writer with your skill who can maintain a theme over an extended piece diction that carries your thought with razor sharp accuracy, I am equal parts awed and envious. Exceptional writing.
2 0 Reply
Harley White 25 February 2018
Thanks for your warmhearted comment! Lately I find myself more drawn to rhyme and meter, though it takes me some time to craft my poems. I appreciate that you noticed!
0 0 Reply
Abekah Emmanuel 09 December 2017
Indeed Harley caught my attention with this one...very soft and flowing. I like the simple rhyme scheme of 'abba', it makes the poem 'child-friendly'(not childish please) .ha! While cautioning us to put childish things away, you also encourage us to learn certain positive traits in childhood. The contrast technique makes the poem interesting and easy to understand. The enjambment also fits the structure and makes your tone a natural one. This is a good work...keep writing!
4 0 Reply
Harley White 09 December 2017
I see that you have read, analyzed and interpreted my poem with great astuteness. Thank you for taking the time and trouble to offer this perceptive response and encouragement!
0 0 Reply
Bri Edwards 26 November 2017
some favorite lines: Put away childish whim yet not delight in playing, then when the world's dismaying, our days won't seem so grim. .......and yet it is helpful to have some people who will actually try doing something constructive about the dismaying world! but, sure, playing' is easier and it's what i'd usually do, ...........like being on PH. besides i ain't rich, smart, or ambitious enough to help the world much. ;)
0 1 Reply
Bri Edwards 26 November 2017
since PH is still being picky about the lengths of comment we can submit, my comments will arrive in sections.
0 1 Reply
Jayatissa K.Liyanage 23 November 2017
However much one becomes different with age, every human goes nostalgic when it comes to reminiscing events in one's own childhood. Congratulations for being the PoD. Thanks for sharing a well executed inspiring juicy poem.
4 0 Reply
Harley White 24 November 2017
I’m so glad you enjoyed the poem, and I appreciate your words of approval!
0 0 Reply
See All Comments