Could there be a sculptor in outer space
deserving of standing ovations,
or grand ethereal artist's embrace
that's fashioning cosmic sensations

unique as each snowflake or star that shines
a myriad marvels manifold,
reality's utterness in designs
for highflying dreamers to behold?

Might some stargazers have wondered as well
since there's a galaxy Sculptor termed
as found in the Sculptor grouping to dwell
by Caroline Herschel first affirmed?

Officially NGC Two Five Three,
by name Silver Dollar also known,
it's one of the closest, brightest we see
of spiral galaxies near our own.

A mere thirteen million light-years away
in Sculptor constellation it lies,
with tendrils of dust from its arms which splay
from disk in lanes to dazzle our eyes.

That spiral's a dusty island indeed,
in structure ‘barred' at the center too,
a galaxy starburst in frantic feed
of star-forming regions imaged blue.

Great Nature's a sculptor of countless skills
from miniature to cosmic scales
replete with a host of glorious thrills
on earth or space fabric's hills and vales.

Within the curvatures gravity shapes
through eons where vast beyond extends,
twixt heavenly bodies I'd freely traipse
in spacetime carvings of warps and bends

perhaps curled up, inside out, or unwound
midst lustrous purviews brilliantly pearled
where only enlightened beings are found
in dreams of celestial wonderworld. 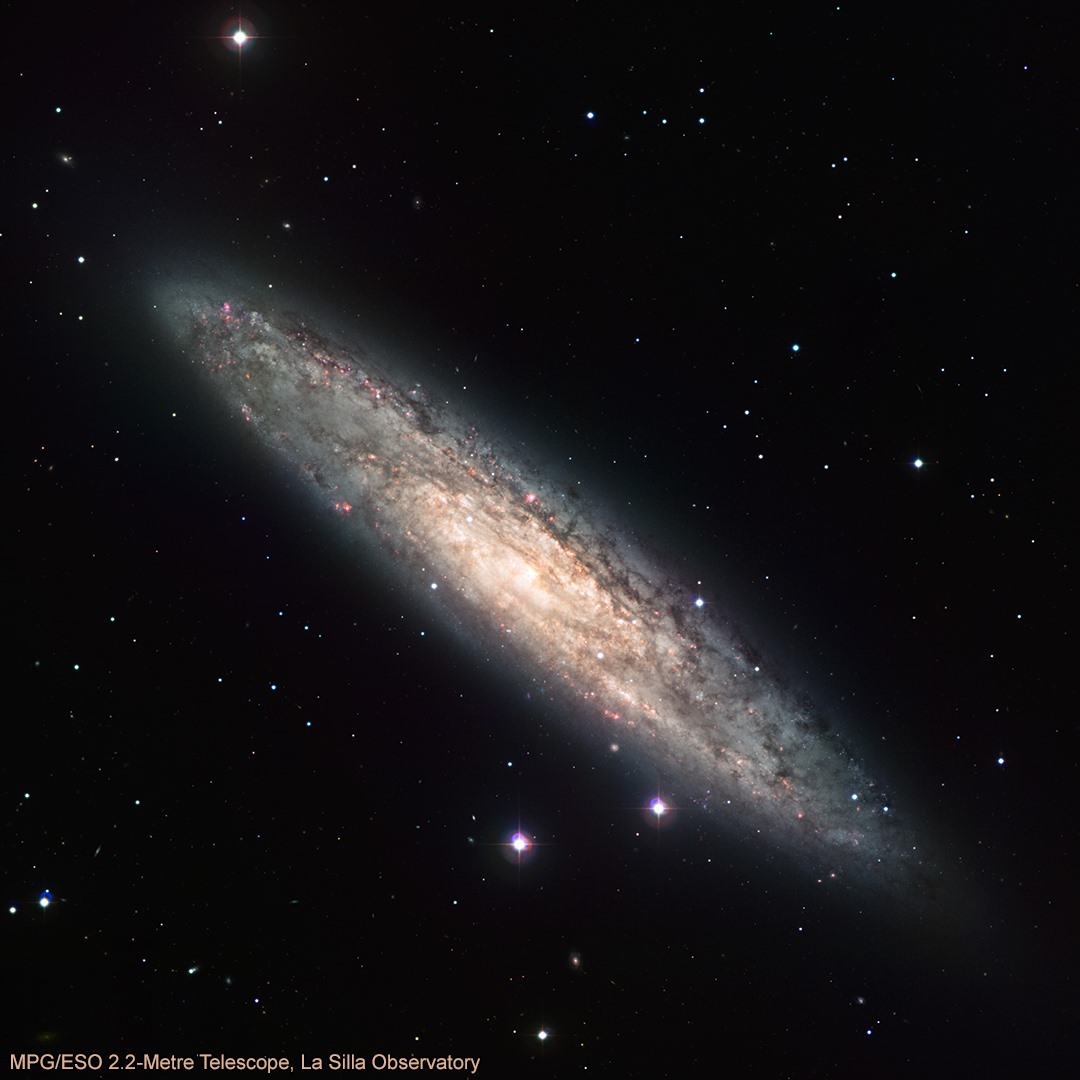 Harley White
Thursday, May 20, 2021
poem poems inspiration island
Download image of this poem.
Report this poem
POET'S NOTES ABOUT THE POEM
Image explanation ~ NGC 253 is one of the closest galaxies to our own. It is a bright spiral that lies about 13 million light-years from Earth in the southern constellation of Sculptor and is noted for being a starburst galaxy with very vigorous star formation and very dusty spiral arms. In the infrared, the rich dust clouds in the galaxy's spiral arms become nearly transparent and a whole host of cool red stars that are otherwise invisible can be seen. The VISTA infrared images were taken through Y, Z, J, Ksand narrowband filters. The field of view is about 38 by 25 arcminutes. Credit: ESO/J. Emerson/VISTA. Acknowledgment: Cambridge Astronomical Survey Unit
COMMENTS OF THE POEM
Geeta Radhakrishna Menon 21 May 2021

Sculptor in space is a poem of aesthetic beauty that embraces artistic imaginations.

Loved the poem. Top stars for you dear Poetess

Such a brilliant poem! Very much informative! !

A free flight of creativity on winged imagination. A beautiful work of art. Thanks for sharing and do remain enriched.

How wonderful to see this beautiful poem as the poem of the day. Heartiest congratulations, dear Harley. I have read, commented and voted before. And i was sure this will be the Poem of the day. I am so happy about it.e

The concluding stanza of this amazing poem, Perhaps curled up, inside out, or unwound midst lustrous purviews brilliantly pearled where only enlightened beings are found in dreams of celestial wonderworld.Mesmerizing words

Love every word of this sublimest rhyming, love the cute atmosphere Great gorgeous read! Congratulations being chosen as The Member Poem Of The Day, dear Harley! .5 Stars Full

Space is beautiful. Your poem is even better