I Went Shopping For Flowers And Searched For Words


I went shopping for flowers and searched for words
-Gayathri B. Seetharam
Justin Trudeau, a new Prime Minister has come to power in Canada, and this was way back in Oct 2015:

The orange coloured sun rises in the pale blue sky over the hilly tops with reddish brown terrain and greenish grass and one feels like singing, The hills are alive with the sound of activity
The run of his PMship in office is depicted by the flowing river with purple and pale blue waters,
The fun of sitting in the shade of the tree with reddish brown trunk and green leaves, through which the sun peeps with its shining power has begun
And it is not done to be too familiar with the PM, says the white lady's lace which marks the territory of the super-special, the past super-special and the ranks of the people power;
We all eat stuffed vegetable buns on the yellow ground beside or under the tree,
While we engage in a ton of tasks, all different in nature
We don the garb of special people, Canadians;
Sometimes, I like to sit by the river of images, the television
Or watch the bits and bytes on the computer screen
And care not a whit for the passing of time for I listen to music while working
And use work, other than regular chores as a conduit for possible career advancement
And it makes my face and mind lit like a LED (which saves energy when compared to an electric bulb)
And hope that by dint of hard work and the little grey cells and white matter and my face, I shall make a comeback.


Acknowledgements:
1. KSCA Stadium, Bangalore, and my family. The former had a floral lamp, reproducing which gave me the idea to make the first floral landscape ever. 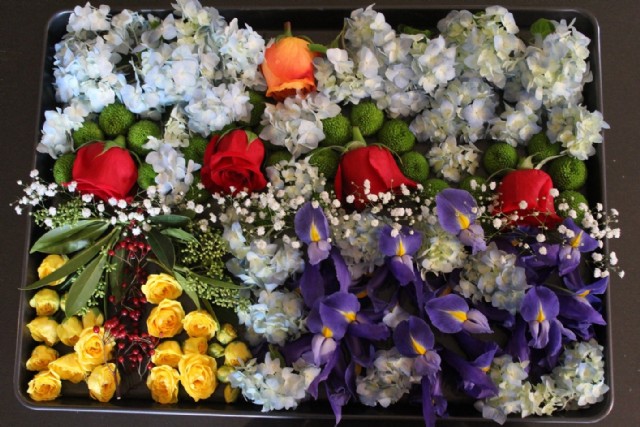 The orange coloured sun rises in the pale blue sky over the hilly tops with reddish brown terrain and greenish grass and one feels like singing, The hills are alive with the sound of activity. Very very poetic. how i love your thoughts. tony

I would like to translate this poem
Poems By Gayathri B. Seetharam
A Ballad On Beverley Mclachlin, The Ex-Chief Justice Of The Supreme Court Of Canada
Here's You, My Dear Departed Father
Hope For An Even Better Tomorrow
A Girl Is Also Special
Black And White
See All Poems by Gayathri B. Seetharam
Next Poem
169 / 359
Previous Poem